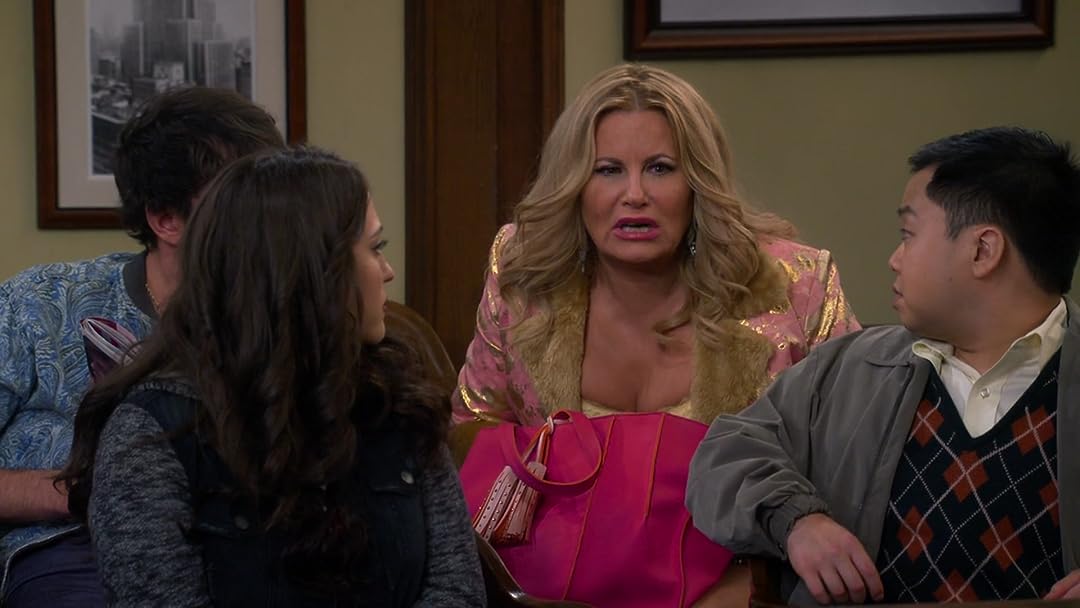 (1,294)
6.62016X-Ray13+
From Michael Patrick King (Sex and the City), 2 Broke Girls, one of TV’s top comedies, continues for a fifth outrageous season! Starring Kat Dennings and Beth Behrs as Max Black and Caroline Channing, in season five, the girls continue to wait tables at the diner while trying to build their business, operating an after-hours cupcake window at the diner and trying to work their way out of “broke.”

TomReviewed in the United States on March 10, 2021
4.0 out of 5 stars
The Two Broke Girls season five episodes take place in many locations.
Verified purchase
Max and Caroline, the Two Broke Girls, are everywhere — not just at the cupcake window and the Williamsburg Diner. Here are just a few examples.

As part of a cupcake related dispute between the LGBTQ community and a right-wing group, the girls find themselves at a Family Foremost Foundation convention, where they choose one side over the other and announce that decision in a live-streamed message that they seal with a kiss.

In two episodes, Max and Caroline go to a yacht for Candy Andy’s wedding and go to a club for sax. Earl plays his saxophone in a reunion of his old group, the Early Birds, at a jazz club.

In one story arc of several episodes, the girls go to Los Angeles where Caroline talks to producers about making a movie of her unlucky life while Max gets lucky with a randy guy, an entertainment lawyer named Randy. And he fixes up Caroline with a friend of his who is likely familiar with Los Angeles history because he appears to be old enough to have lived through most of it, starting not too many decades since the city’s founding in 1781.

The whole Williamsburg Diner family, including Sophie, goes to an Alice in Wonderland themed escape room where Han takes them as a team-building exercise. You don’t see them escape, but Han and Earl see Sophie and Oleg try to make a baby (when prompted by an ovulation app monkey on Sophie’s phone) while Max and Caroline are down the rabbit hole.

When broke Caroline’s elderly grandmother wakes up from a coma that started before the Channing family scandal, Caroline hosts a coming out (of the coma) luncheon for Grammy at the grandmother’s luxury residence, with the diner family acting as servants. When Grammy hears that she is now broke too, she doesn’t take the news well and ends up in a new location — either way up or way down depending upon your opinion of the formerly rich.

Of course, there’s no place like home, meaning the girls’ apartment and the Williamsburg Diner. Perhaps the funniest episode of the season is the one with the descriptive title “AND THE NOT REGULAR DOWN THERE,” and it takes place in those locations. Let’s just say that it involves Max’s boyfriend at that time and has double the laughs of a normal episode. You will be amazed at the number of jokes about one thing … well, actually two things.

Finally, at the end of the season, the girls go from owning a cupcake shop to owning a dessert bar. I won’t reveal that location. In addition to that, they make a significant investment.

The Two Broke Girls show may not be family friendly G-rated but it is extremely funny. The laughs come at you at a rapid pace. As I have said, in season five of the show, Max and Caroline are at many locations. You should invite them to your location, your home, whether through reruns or DVDs.

I am sad to say that only one more season of Two Broke Girls is left to watch. I will enjoy every episode of season six.

JenReviewed in the United States on October 9, 2016
5.0 out of 5 stars
STILL # TEAM DINER!
Verified purchase
They're always a bit "raunchy" in their humor, but that's kinda where you find adoration for the characters. I've enjoyed the show since I started watching it, so much so, that I purchased each season on DVD so I could catch up. Each season, it seems like "Max", "Caroline", and "the diner gang" evolve. I LOVED the new boyfriend for Max in season 5!! It's about time she had a grownup, HOT man for her! But then ***SPOILER ALERT*** No, I won't ruin it for others. LoL

I hope EVERYONE comes back! The new "dessert bar" idea, Sophie & Oleg being parents (?!?), and everything else... There's so much potential. I hope they're back, keeping us laughing, for a few more seasons.
*side note* whatever was done to Kat Denning (aka "Max") as far as her hair is concerned... Please STOP! I don't know if it's extensions or what, but if you WATCH, you'll notice that she can't keep her hands out of her hair...EVERY. SINGLE. EPISODE. That tells me that the actress herself is either new, or uncomfortable with whatever it is. It's ridiculous and annoying to watch. Especially since "Max" is a no nonsense kind of girl.

Still laughing after 5 seasons, and wanting more! 😂
One person found this helpful

Homer J. RajotteReviewed in the United States on November 30, 2016
3.0 out of 5 stars
Could be so much more...
Verified purchase
Overall a good show with talented actors. But, I'm sorry, Whiny Sophie has got to go. She's annoying, narcissistic, and a bore most of the time. And I could never figure out why Sophie hates Caroline so much. (This comment is NOT meant to impugn Jennifer Coolidge, who is a decent actress. It's just her character I hate.) I'd rather see more of the big gay guy from the pastry school.
The sex, drug, and HEP-C humor wore out long ago. Improved writing could drastically improve this show, which has steadily gone downhill after season 1-2, when the characters bonded and developed.
DVD quality is excellent.
4 people found this helpful

California girlReviewed in the United States on January 2, 2018
5.0 out of 5 stars
2 Broke Girls: The Complete Fifth Season ...
Verified purchase
I love this show. I think of Max & Caroline as the Lucy Ricardo & Ethel Mertz of today. I don't like much about today's TV shows. Most are night time soap operas in my opinion. Cop shows are more about the relationships of the fictitious detectives or attorneys than about the crime story. Who cares? I certainly don't. About the only other show I like is the Big Bang Theory, but it seems to have run it's course, too. Last season? Two Broke Girls is a character driven show, which is what usually attracts me. Since I have a class the night that it was on, I have to buy the DVDs to see the season.
One person found this helpful

Mark J. HouseReviewed in the United States on October 6, 2018
5.0 out of 5 stars
Married with Children Meets Alice
Verified purchase
Extremely funny show with the most raunchy jokes in rapid fire I have seen in a long time! Remember the show Alice with the waitresses in the diner? Combine that with Married with Children style humor and you understand this show. Two girls from very different backgrounds get along and work together at a diner and a cupcake shop. The humor is edgy and does not let up for entire episodes! If you like dirty jokes and sexy women, this is the series for you!
One person found this helpful

CCReviewed in the United States on September 25, 2016
4.0 out of 5 stars
Two Broke Girls-Season Five
Verified purchase
I watched the entire Season this weekend. I like the talent of all the actors as usual. They're good at giving their all to the lines they're fed. Although I noticed some inconsistencies with the storyline when compared with the past ones, i.e. the first episode of this Season where Caroline was upset Max was over charging her on the rent when for the past four years they were supposedly living in the apt. illegally; THEN Max's boyfriend gets them ON the lease and two months rent free? Other than that, I still enjoyed all of the shows.
One person found this helpful

Jackie blancasReviewed in the United States on August 5, 2021
5.0 out of 5 stars
2 Broke Girls Season 5
Verified purchase
Everything worked great the discs weren’t scratched. Which is a plus what I disliked was the cover shelve was a bit wore. Like it wasn’t brand new like someone returned the cover shelve. And the company that gave me the dvd was like “let’s just put the cover shelve over the dvd cover. The person won’t notice.” I look into detail to make sure everything is working properly. Please do better with your products.

K OrtizReviewed in the United States on February 27, 2019
4.0 out of 5 stars
Disc 3 is defective ** UPDATED
Verified purchase
**Disc 3 is still stuck but Amazon is refunding my purchase.
Disc 3 is defective, there are spots on the disc that won’t come off with DVD cleaner wipe. Tried the disc several times but wouldn’t play in Xbox One. Put the disc in DVD player and it is now stuck in DVD player and it will not open. I am aware that this is more of a technical issue and the problem is actually the disc and not the seller, Amazon or the show but it's still frustrating.
See all reviews
Back to top
Get to Know Us
Make Money with Us
Amazon Payment Products
Let Us Help You
EnglishChoose a language for shopping. United StatesChoose a country/region for shopping.
© 1996-2022, Amazon.com, Inc. or its affiliates