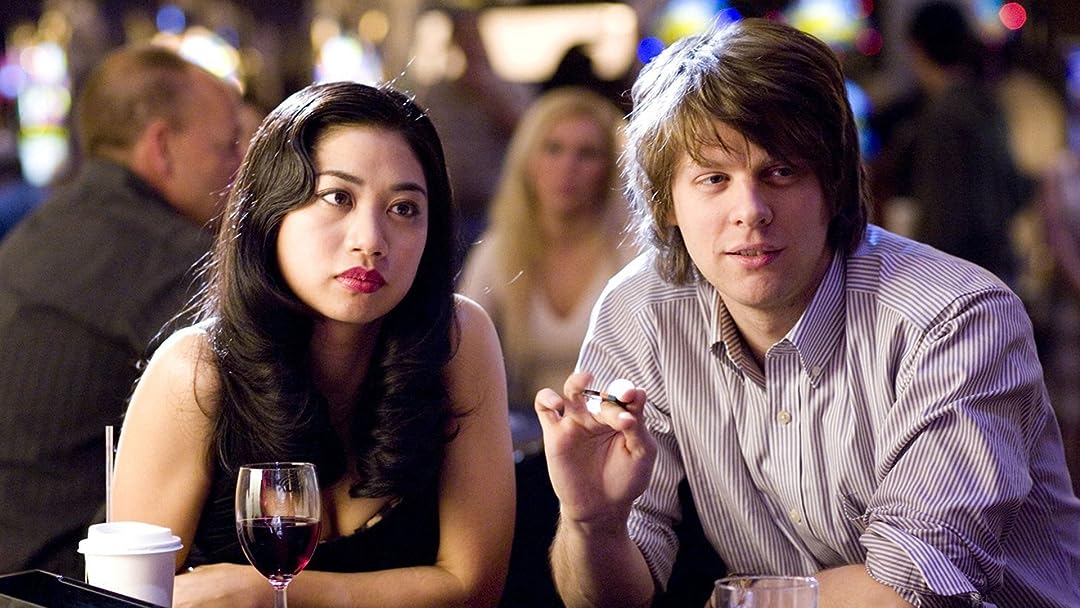 (2,159)
6.82 h 2 min2008X-RayPG-13
Academy Award Winner Kevin Spacey (The Usual Suspects) and young Hollywood super star Kate Boswoth (Superman Returns) star in this clever & adreniline filled heist film. An MIT math whiz is recruited by a teacher to join a specialized team of card counters. They break away from their mentor before casino security finally catches up with them. Based on book "Bringing Down the House." It co-stars..

Mike GishReviewed in the United States on December 23, 2018
2.0 out of 5 stars
Pure Logic Beats Pure Math
Verified purchase
Unless you're using math to design something, pure logic will serve you better in life. Everything in life makes sense, you may not see it right away, but that's the way it's designed and if you keep trying eventually you'll see it. Math can be so complex that the greatest mathematical geniuses that ever lived still haven't come up with a "Theory of Everything", but using common sense you can figure it out. Reason, logic, and spirit are God's gifts for us to use to find our way back to Him. They're our truth and lie detectors. Besides, pure logic and reason are math in conceptual form.
So, trust yourself, take charge of your life, nobody else can do it for you. Don't give away your power.
21 people found this helpful

joel wingReviewed in the United States on September 6, 2020
4.0 out of 5 stars
Gambling brings you in Twists keep it interesting
Verified purchase
An MIT Professor Rosa (Kevin Spacey) recruits the best and the brightest from his math classes and teaches them how to count cards and win big bucks playing Blackjack. He picks Ben (Jim Sturgess) who is desperate for money to pay for Harvard where he wants to go for medical school. There’s an added bonus for him that a girl he likes Jill (Kate Bosworth) is part of the team. Professor Rosa keeps telling Ben what they’re doing isn’t illegal, they’re just counting cards. When they go to Las Vegas however Ben finds out they are going to use fake identities and act like they don’t know each other. That’s an early warning that the house doesn’t appreciate card counters. There’s also the threat of greed destroying the team. Those are the issues that Ben faces amongst all the money and success he thinks he’s getting into.

The film is told from Ben’s perspective. The first half takes the viewer through his anxiety over getting into Harvard and then the excitement of him gambling in Las Vegas and taking home thousands of dollars. It seems like a classic rise and fall story with Ben simply having fallen in with the wrong company. Then there’s a double twist at the end however. Basically the gambling brings you in and then the twists keep things interesting.
C

sixthreezyReviewed in the United States on April 6, 2019
3.0 out of 5 stars
21 - Math is Amazing
Verified purchase
The first time I saw 21 on video I really enjoyed it, and I didn't quite see all of the twists coming so I gave it a fairly decent rating (7/10). Coming back into it again on this re-watch on Blu-ray, I figured I'd be enjoying a clever little Vegas number that would entertain at the very least, because I remembered where the movie was headed. What I found is that this movie has not aged well, and in fact, may have never been that great to begin with. I'll admit that I also am a believer in separating the art from the artist, but watching Kevin Spacey on film for the first time since his whole controversy does not help this film in the slightest.

The biggest problem with this film is the lack of emotion put in by Jim Sturgess. I've never been particularly fond of him as an actor, but during the late 2000s he was a big name in other movies such as Across the Universe, in which he's actually pretty decent. He's serviceable and believable as a young, somewhat quirky man, but something about his performance in this one doesn't seem genuine. Kevin Spacey also plays the type of "scumbag" character that he seemed to play so well, and now we all know why that may have been. Regardless, he probably is the driving character in the film, and I think his story with Laurence Fishburne should have gotten more play before the end of the film.

I think Laurence's character, who is the enforcer in the chain of casinos in Vegas that keep falling victim to card counters, is probably the best in the movie and he has so little screen-time. The story of Kevin's Mickey and Laurence's Cole ends up being the driving force of the whole over-arching plot, and perhaps why it feels like it's just dropped in your lap at the most convenient time because the filmmakers wanted a twist. I would have sacrificed the twist for depth of story in this instance, because this movie has nothing going for it the second time around. Some of the other young actors in this group of players have their rare moments to shine, but Jim is left with the ultimate burden of being the "big player" in two ways.

The real story is probably a lot more interesting, as this film is based on a book about a group of MIT students who hit Vegas hard using math and card-counting. It doesn't seem that challenging, but then you go and actually sit and play a game of Blackjack and find that it's much more complex. Due to the nature of the game and the way it's dealt in casinos, it can actually be quite awhile before you get to a count that's high enough for the big bets. I thought the Special Features were interesting in showing how card counting works, as well as one that shows how they filmed the opening bridge shot, which in the commentary they mention as one of their favorites and talk it up like it meant a lot for them to achieve.

Overall, this movie is worth a rental viewing if you've never seen it before and if you're into movies about poker or casino games. I think of other movies like Rounders when it comes to purchase-worthy poker films, but ultimately it's not that bad of a movie. I bought this Used from a seller on Amazon and it even came with the original Blu-ray insert as pictured, so I was quite surprised with the condition of this item upon arrival. This movie is another example of how math can do so many extraordinary things, even if this case it's in relation to a casino game.

The Blu-ray copy was in perfect condition and all features played exactly as they should. I tried to play the 21 Blackjack Game featured on here but it didn't work in my Blu-ray drive, though I can really play that anywhere so that is not contributing to the 3-star rating. I hope that this review serves you better than the top review on this page right now... Not sure how you can denounce math as essentially meaningless, and then state that logic and our God-given spirits are more definitive... And that logic is basically math in conceptual form, what? 2+2 will ALWAYS equal 4, but logic would state that two 3's make an 8 because they each look like one half of that number on paper. If anything, watch this movie to spite that review that somehow got through the Amazon censors.

S. FoxReviewed in the United States on October 8, 2021
4.0 out of 5 stars
Blackjack thrills
Verified purchase
99% of the viewers will love this tale of a socially inept math genius who discovers the exciting world of gambling victories and all the side benefits that accompany those winnings. If you did not scream at the genius who did not use a bank instead of his ceiling... As a gambling expert and former casino consultant, some minor irritations can be forgiven in the name of poetic license. The movie focuses on card counting and there is a nice extra that makes an attempt to explain why counting overcomes the house odds. However, don't assume that explanation will offer the viewer enough information to try it in a casino. Blackjack counting in Las Vegas is now considered illegal, but not in Atlantic City. For every deck in a shoe, the odds for the counter diminish, and the strategy is altered. The movie does not show the charts for the various changes. Shuffle-tracking is mentioned in passing, but never employed in the movie. A quick definition of shuffle-tracking is if one can identify a clump or cluster of cards unchanged after the shuffle of all decks, the order is known and allows a bettor to win without risk. This skill is also illegal to use in Las Vegas and the casino has software that can identify the groups faster than the player.
One person found this helpful

BobBoylstonReviewed in the United States on September 14, 2021
5.0 out of 5 stars
Great Movie and Better Life Lesson
Verified purchase
I'm a harsh critic, but I really enjoyed this movie. It did what so few movies are able or willing to do these days - it stirred emotions that are other than simple, base rage or lust. Or maybe it just brought memories of the 80's? lol - Anyways, the ending was perfect. sit back and enjoy the ride.
One person found this helpful

MichaelReviewed in the United States on November 16, 2018
5.0 out of 5 stars
It's even better the second time. A Fun....Fun....Movie.
Verified purchase
A teacher and his four best student go to Las Vegas and try to win a fortune by 'counting cards' in
the game of '21'. Lots of twists and turns. There are few movies that are this much fun.
ENJOY!!!
5 people found this helpful

Ron BakerReviewed in the United States on December 9, 2018
3.0 out of 5 stars
Vegas should be more exciting
Verified purchase
I liked this but it's lacking the excitement one would expect from a film about a bunch of college kids beating old school Vegas at its own game. The central character's acting is as dull and wooden as Keanu Reeves (like, one facial expression dull) and the other actors portraying students are lackluster in their performances. Still, there is some fun to be had here and Spacey is good as always. Moderate recommendation.
3 people found this helpful
See all reviews
Back to top
Get to Know Us
Make Money with Us
Amazon Payment Products
Let Us Help You
EnglishChoose a language for shopping. United StatesChoose a country/region for shopping.
© 1996-2021, Amazon.com, Inc. or its affiliates