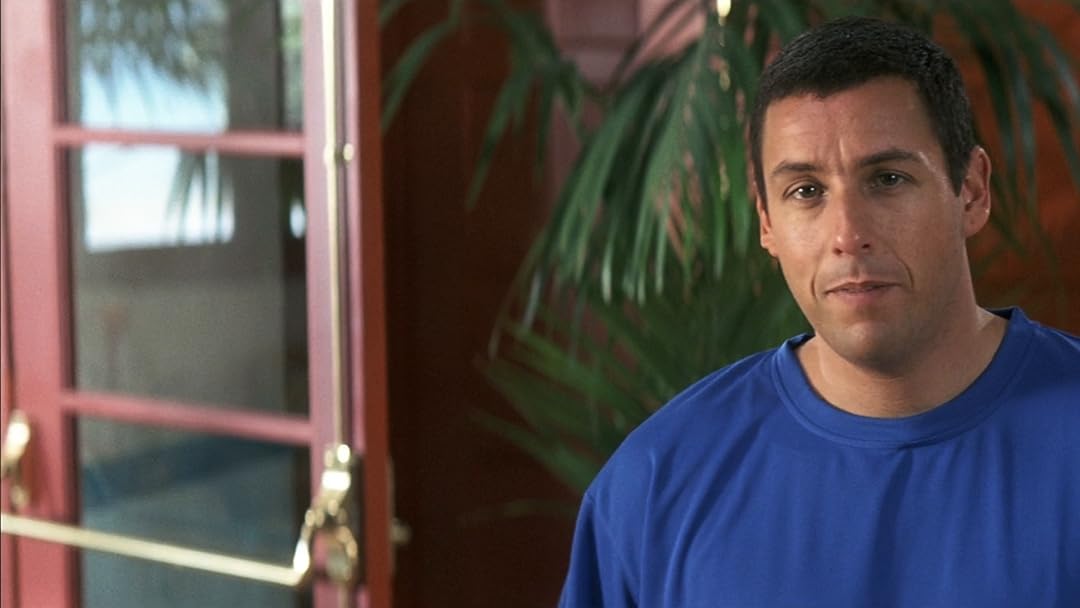 (3,911)
6.81 h 39 min2004X-RayPG-13
A Hawaiian island playboy has to use his imagination to win over the girl of his dreams when he discovers she has no short-term memory. Every night he is erased from her memory so he has to make her fall in love with him all over again the next day...and the next...and the next!

Kindle CustomerReviewed in the United States on April 2, 2019
5.0 out of 5 stars
One of Sandler's best, and a wholesome film overall.
Verified purchase
Plenty of other reviews will give you plot details, etc.

I'll just say that while I enjoy many of Sandler's films, sometimes he doesn't strike the right balance of humor and depth to rise above the shallow comedy. This film is an exception. The story telling is subtle where it needs to be, not drawing out the plot points to bring the viewer along. While there are similar ridiculous characters to other Sandler movies, they are used sparingly and the film focuses on a deeper thread beneath a simple story. Perhaps the message is value today, or treat people and their time as the precious thing they are. Perhaps the film is just having good fun. It is a mood piece with plenty of laughs and feelings, and manages to be wholesome while still being a slight bit of the crude Sandler we expect. Can't go wrong with this one if you like Sandler or a cheesy romance now and then.

Goth Gone GreyReviewed in the United States on September 21, 2020
4.0 out of 5 stars
Start with Groundhog Day, then twist it...
Verified purchase
Ah, Adam Sandler. That goofy guy with The Hanukkah Song, and SNL characters, and vulgar comedy... That somehow turns to actually caring about his character, and most of the cast, and why are you making me feel, this was supposed to be a comedy?

He's done this to me before; I shouldn't be surprised, but somehow it catches me off guard every time.

5 star amazingness? Not quite. A couple of the characters are cringe-worthy, like Rob Schneider's bizarre best friend schtick, and the androgynous co-worker recurring gag that didn't age well. The vomiting walrus is some sort of gauntlet to run to weed out the weak, before the crude comedy fades into the background while romance and emotion rise to the forefront.

Would I watch it again? Not one of my yearly go-tos, but yeah, I probably will.

Nom de PlumeReviewed in the United States on October 25, 2017
5.0 out of 5 stars
Great "Groundhog Day" sort of thing about it
Verified purchase
Nothing like a movie that can work its angles on the rom-com genre with such spot on material and deftly executed skill as to make a regular straight guy FORGET that he's watching a rom-com... From my lips to god's ears: since this first came out I've probably ended up re-watching it twice a year, every year...

As far as the Barrymore-Sandler pairing goes, in general? Well, they'll never be confused with Hepburn-Tracey... But I do believe that this film has a sort of "Groundhog Day" quality that will make it a *go-to-again-and-again* flick that lots of people who are normally one-off movie watchers will enjoy for years.

Incidentally, for the uninitiated: these two were also great in "The Wedding Singer." It's not on that I look for to watch over again--but I don't object to it if someone I'm around tees it up on the telly. I know they did others. But the fact that no titles spring to mind reflects the imression they didn't make on me.
5 people found this helpful

LaurieReviewed in the United States on July 11, 2020
5.0 out of 5 stars
One of my favorite comedies!
Verified purchase
I bought this because it is one of my favorite romantic comedies that somehow I never bought on DVD. My daughter is a teenager who had never seen the movie so I actually purchased it to show her, as well. I simply love Drew's character in this movie! It has a unique premise with sweet moments, hillarious moments, and at least one short-lived tearful moment. I wish it did not have the three or four over the top moments (crude sexual humor) but I guess that's part of Adam Sandler movies as a general rule. His character is loveable, though! This is definitely a light summer fun movie.
One person found this helpful

nycReviewed in the United States on February 27, 2018
5.0 out of 5 stars
Humor & Romance: Woman Loses Short Term Memory Each Day After Car Accident & a Playboy Vet Falls for Her
Verified purchase
This is a sweet movie. A great romance with humor and some sadness. Story is about a woman who loses her short term memory on a daily bases after a car accident, and a guy who normally is a playboy falls for this woman as he enjoyed the challenge to feel like he's dating her for the first time each time being that she thinks it's always her first time meeting him. It may seem unbelievable, but it's not much different than dementia. Plus, I have seen a friend who fell down the stairs and couldn't remember any short term memories that happened that entire day. Adam Sandler plays a vet at a Hawaiian aquarium. It was nice that this movie was filmed on location in Hawaii. Beautiful place with nice people, and cool reference to Hawaiians' love for SPAM.
One person found this helpful

happyreaderReviewed in the United States on December 24, 2021
1.0 out of 5 stars
bait and switch
Verified purchase
The trailer looked fun and family friendly, however five minutes into the movie we could not stomach any more. It was just a string of ilthy language and gross lewd jokes and we had to turn it off. If I had known how to complain and ask for a refund, I would have.

TrixieReviewed in the United States on February 29, 2020
5.0 out of 5 stars
Barrymore carries this film
Verified purchase
So, the scenes with only Mr. Sandler are a little tough (sorry) unless you enjoy his humor. However, Drew carries this film throughout the narrative and she is so believeable in the film altho the plot is a little thin. But again, Drew comes through! I LOLed in several scenes because of her.

film fancierReviewed in the United States on June 16, 2014
4.0 out of 5 stars
Unforgettable
Verified purchase
If you make it past the walrus with an upset stomach, you'll be glad you did. This is the story of a womanizing marine veterinarian who is willing to give up his meaningless one-night stands for a woman whose short-term memory only lasts for one day. The screenplay has its raunchy moments, particularly early on, but it is easily redeemed by a uniquely refreshing premise. The real force of the film is Drew Barrymore. She crafts a character who is strong, joyous, vulnerable, and tragically challenged. While maintaining this believable balance, she delivers some of the funniest moments with wonderful aplomb. Sandler offers a delightful performance through his character's growing love, compassion, and determination. This is a surprisingly unforgettable movie for those of us who choose to believe that there is always hope and who know that our best efforts are made all the better with a little humor.
2 people found this helpful
See all reviews
Back to top
Get to Know Us
Make Money with Us
Amazon Payment Products
Let Us Help You
EnglishChoose a language for shopping. United StatesChoose a country/region for shopping.
© 1996-2022, Amazon.com, Inc. or its affiliates