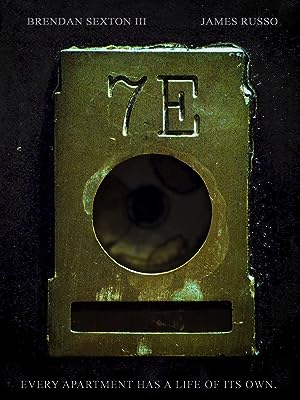 (12)
4.61 h 18 min201313+
Brendan Sexton III (Boys Don't Cry, AMC's The Killing) stars as a young man who struggles with unexplained events inside of a New York apartment building where tenants are not who they appear to be.

Rentals include 30 days to start watching this video and 7 days to finish once started.
Add to
Watchlist
By ordering or viewing, you agree to our Terms. Sold by Amazon.com Services LLC.
Write review

The Movie GuyReviewed in the United States on November 2, 2015
2.0 out of 5 stars
I DON'T WANT TO TALK ABOUT IT.
Verified purchase
I don't know if this review has plot spoilers or not, because I don't know if I understand what this was about. However I will at the end supply you with what I consider to be my explanation of the film for those who did watch it and are still scratching their head.

Paul (John Savage) owns a warehouse. His driver is out and his stepson (?) Clyde (Brendan Sexton III) who he has fired is sitting there. Recently a co-worker died from...? being in the street? Paul asks Clyde to go to NYC to tend to Kate (Ella Lentini) which the DVD cover claims was a "younger cousin", although I don't know if any family relationship was established other than Paul claims his family "is a mess."

Kate's roommate Rob was recently killed and she is traumatized. She didn't know Rob as a boyfriend, he was just a roommate. Kate is taking meds and sleeps all the time. Clyde has odd flashbacks or dreams. His head is not on straight. There are two guys in the apartment building who have a keen interest in Kate. Sam is an older man who has issues getting over his wife being killed and raped. Rich has a thing for Kate and may or may not be her boyfriend.

Clyde finds photos of a woman named Sadie (Florencia Lozano) and speculates on Rob's (Anthony Ordonez) relationship with her as a newspaper article with the photos claims she was murdered. Rob plays detective in her case, which adds to his creep factor.

Yes, the story ends without an explanation to tie things together...or does it?

MY PLOT SPOILER EXPLANATION: The last scene with Sam attacking Rich was the key. Sam apparently believed Rob was the man that killed his wife and Sam was the one that killed Rob who may or may not have been his wife's or Sadie's killer. Sam thought the same thing about Rich. He most assuredly thought the same about Rob.

Dominic Van DeurenReviewed in the United States on February 3, 2015
5.0 out of 5 stars
Five Stars
Verified purchase
Very happy with item!!!

Kathryn D.Reviewed in the United States on September 21, 2014
5.0 out of 5 stars
Five Stars
Verified purchase
thanks

joeReviewed in the United States on February 7, 2014
5.0 out of 5 stars
a slow-burn mystery
Verified purchase
Teddy Schenck directs a slow-burn mystery that feels a heat-stroke hallucination. Brendan Sexton III really delivers here, and James Russo brings it to the table.
One person found this helpful

MinneapolisReviewed in the United States on December 30, 2013
5.0 out of 5 stars
Oh wow!
Verified purchase
Life is like that. No answers. Oh wow! We just do the best we can but once in a while real life invades our sphere. We don't like it but it is true. Kudos to Teddy Schenck. Kudos to Brendan. Ouch and keep on trucking
3 people found this helpful

DonReviewed in the United States on February 19, 2014
2.0 out of 5 stars
Boring
Verified purchase
It was boring it ended poorly. It felt as though they just were running out of time. Nothing really happens

Mindset Editing ProductionsReviewed in the United States on December 14, 2013
1.0 out of 5 stars
Can I get a refund on the 2 hours wasted on this stupid movie?
Verified purchase
I haven't the words to fully express the piece of crap this movie is. I've had more fun watching paint dry. We thought we had paid for a mystery-thriller. The only mystery of it was when would it be over and the thrill came when it finally did. I had a glimmer of hope in the beginning... it was just gas.
6 people found this helpful

Brian CReviewed in the United States on January 1, 2014
1.0 out of 5 stars
Absolutely horrible
Verified purchase
Do not waste your money. If there was a rating lower than one star this would get it. Absolute waste of time.
4 people found this helpful
See all reviews
Back to top
Get to Know Us
Make Money with Us
Amazon Payment Products
Let Us Help You
EnglishChoose a language for shopping. United StatesChoose a country/region for shopping.
© 1996-2022, Amazon.com, Inc. or its affiliates