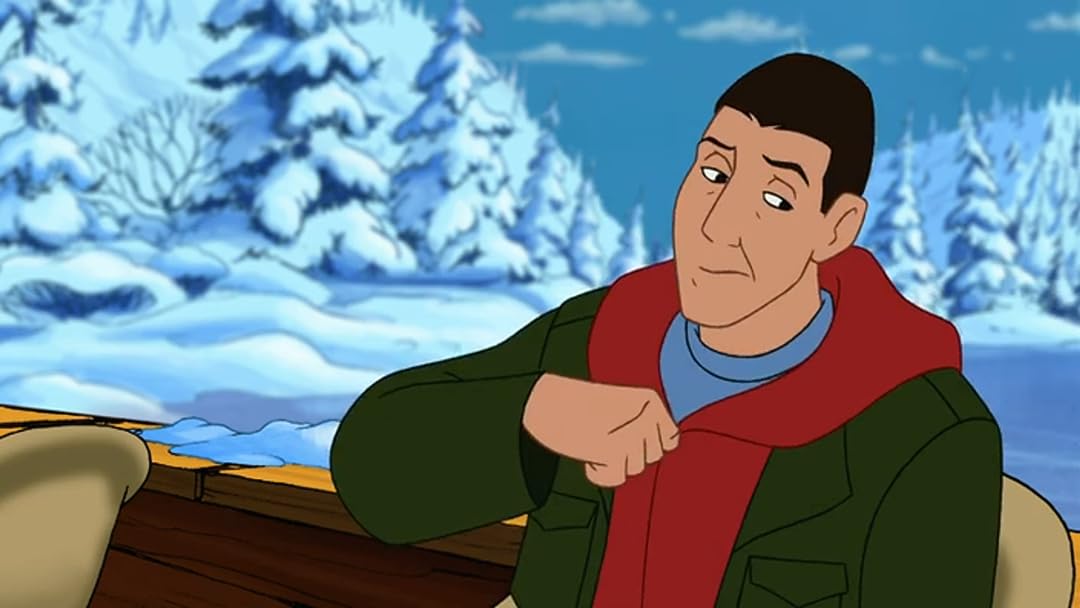 (8,109)
5.31 h 16 min2002PG-13
Once a happy boy and now the town delinquent, Davey (voiced by Sandler) is given one last chance toredeem himself with the community and discover the true meaning of the holiday season.

Cory FosterReviewed in the United States on December 14, 2016
5.0 out of 5 stars
Favorite Holiday movie!
Verified purchase
First off not a big Adam Sandler fan. Couldn't stand Billy Madison, Big Daddy, or Mr. Deeds. Now forget all that rubbish and buy this movie! This is without a doubt my favorite Holliday movie! Sandlers sophomoric humor actually blends really well with the animation style and plot. Don't take it too seriously! Don't go in expecting a feel good holiday movie like A wonderful life, ect, ect. This movie is about an A-hole who actually develops as a character. Not in the normal way where by the end of the movie they are a whole different person, but in a believable "Eh, he is still a jerk, but at least less of a jerk than what he was." kind of way. The songs are fun, the plot is fun, the whole movie is unique. I make my wife watch it every year. SHE hates it, but she is ultra hot so I can look past that minor flaw. I mean that's what love is all about right?
11 people found this helpful

SCOTT A DAILEYReviewed in the United States on December 19, 2020
1.0 out of 5 stars
Truly Horrible
Verified purchase
Kind of breathtaking in its poor taste; actually remove the "kind of". Breathtaking in its poor taste. Unfathomably awful. Recommended by an acquaintance who will be suspect in my eyes for the rest of her life. Makes one wonder about the decision making processes that led to this outcome. Words fail. To actually sell this - as opposed to burying it and pretending it never happened, and never speak of this again - is chutzpah of the highest order.
3 people found this helpful

John CReviewed in the United States on November 13, 2015
4.0 out of 5 stars
Sandler movie Not for little kids (Read Ratings) Over all not bad.
Verified purchase
Not one of His best movies but over all not bad. Look at rating before sitting the little ones down in front of TV. Sandler is know for his raunchy and crude behavior. Some like it knowing all just an act. While others take it to heart thinking how a person acts on screen is same off. Every movie has it story line and scripts so don't go trying to compare this to his past work. I say watch movie here or wherever via strem,etc Like other reviews said have to watch the movie to full understand the main character Davey Stone and why He acts out and in disregard to the law or anybody. Nice turn around at the end. This is jst my opinion and you know what they say about those so watch if you like cool if not always the next movie to enjoy. As for the ones that don't like Adam Sandler yet they watch his movie just to talk smack: Just how stupid are you?? Go play in traffic!! For the parents that let the TV raise their kids Wake up and learn to read even though this is an Animation know that some Anime can get sick and twisted. For Sandler fans trying to compare thinking this is Bill Madison,Happy Gilmore,Etc Not His best work but has that Sandler twist to it. I started out a Adam Sandler fan going to his stand up Comedy shows way before SNL,Movies or Hollywood. So like every other movie I take it as what it is just a move nothing more. The waste of time people reviews good for you maybe you should be writing your speech for The Noble Piece Prize instead of wasting your life away watching movies.....
6 people found this helpful

John D. WilsonReviewed in the United States on January 9, 2016
1.0 out of 5 stars
Not the movie I thought it would be - just too much awful
Verified purchase
This movie needs a better description. Adam Sandler's character isn't a delinquent, he's an a!@#$%^- and his sense of humor dominates this "PG-13" movie. I assumed that the humor would be crude and there would be a few cringe moments, but really the moments of comedic genius were like finding hershey's kisses in a field full of, well, you know.

And I thought there was supposed to be a heartwarming moment but by the time that came around it was mainly a relief that there wouldn't be more crude jokes. And then of course I was wrong, there were more to come.

I guess the idea was to spoof the holiday movie genre, but if that's the case, make that clear in the marketing. And it wasn't the Spinal Tap of holiday movies, that's for sure.

Captain ArgghReviewed in the United States on November 16, 2015
2.0 out of 5 stars
Adam is always a favorite in my house
Verified purchase
Sometimes you just got to let other people play roles in your production. Adam is always a favorite in my house, but unfortunately his grinding voice over of some characters were a little much to take and I felt like throwing my shoe through the TV about 15 minutes into the show. Other than that, this production was perfect for an adolescent boy with plenty of fart jokes, poop jokes and foul language sprinkled in to top off a standard Adam Sandler production that is frankly starting to get a LOT old. But hey, who the hell am I? I live in a tiny house with my four young kids and a sizable debt while "Mister Poop-joke" is a multi-millionaire living in LA, surrounded and loved by his adoring fans.

In any case, rent it, but be warned.
7 people found this helpful

David GordonReviewed in the United States on December 14, 2015
4.0 out of 5 stars
Dated, But Still Holds Up In Comparison To Sandler's More Recent Work
Verified purchase
I remember watching this as a child, and I loved it greatly during that time. As an adult, looking back I can see the humor being a tiny bit dated. Adam Sandler's typical humor was a lot funnier during this time. Still, watching it in 2015 I can easily say it's one of my favorite holiday themed movies.
The movie is essentially what you'd get if more shows/movies highlighted the village idiot's life currently, but in a musical fashion to get people at least slightly moving to the tunes. As a musical, it's a bit.. Lacking in memorable tunes, but I can't deny that Sandler's voice is definitely memorable in this movie, whether it be in a parody-like voice, or his own, he does it pretty well.
Story-wise, it's what I originally said, a village idiot getting more of a backstory and plot. Davey Stone is a mess of a man that has wreaked havoc amongst the public quite a lot, more specifically around the holidays. It's not until Whitey Duvall comes to Stone's rescue in court that he's even saved from jail time. Over the course of the movie, more characters get introduced including Jennifer(Stone's love interest.), Benjamin(Jennifer's son.), and Eleanore(Whitey's sister.). They play a role in the development of Stone's character, making us see a human side of this careless wreck.
Overall, the movie really builds, while it's the same typical humor(I know I said this earlier.), it still holds a candle in the plethora of Adam Sandler films that were kinda good. Moments did feel like it dragged out, and there's a specific scene where you kinda question Whitey and Eleanore for not leaving well enough alone in terms of Davey's past. Despite that, it's a good film for Adam Sandler fans, one that you should put in their stockings this holiday if you know a fan that's yet to see this film.
2 people found this helpful
See all reviews
Back to top
Get to Know Us
Make Money with Us
Amazon Payment Products
Let Us Help You
EnglishChoose a language for shopping. United StatesChoose a country/region for shopping.
© 1996-2021, Amazon.com, Inc. or its affiliates