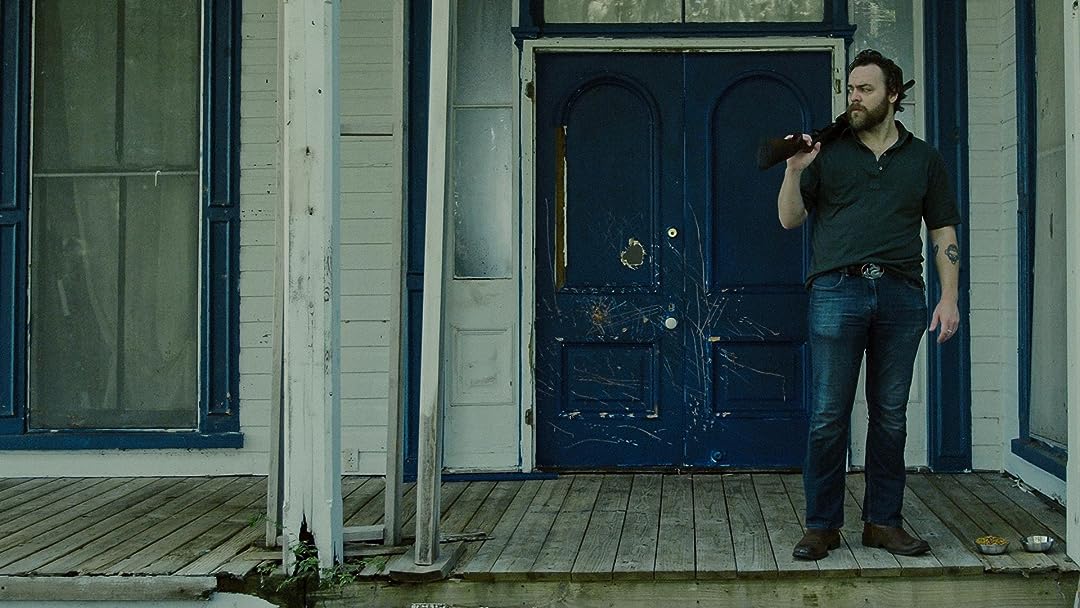 (951)
5.41 h 23 min202118+
After Hank suddenly wakes up to an empty home with nothing but a cryptic note from Abby, his life begins to fall apart and seems to trigger the arrival of a ferocious creature that crawls out of the old grove on the edge of his property.

RCR, Jr.Reviewed in the United States on February 17, 2020
5.0 out of 5 stars
Dark, foreboding, and a hell of a lot of fun
Verified purchase
Jeremy Gardner and Co. (The Battery, Tex Montana Will Survive) have done it again with another incredibly fun, terrifying offering. After Midnight is two movies, bound together by Gardner's very tangible portrayal of a relatively decent (if somewhat self-absorbed) everyman in two difficult predicaments. The tension becomes so thick as the film progresses, I was choking on it.

The takes in this movie go on and on, but the dialogue never feels strained or forced. There is such a natural rapport between Hank and Abby. I remembered myself having that conversation. This film works hard to create it's own mythology. The underlying fears and concerns of marriage and children can be so overwhelming, is there even time for a monster? Let alone an inverted vagina dentata.

Cinematography, coloring, and music (that music), and especially the editing, all contributed to the overall success of this incredible movie. I saw Amazon negative reviews...eh, I don't want to be one of those "you just didn't get it" snobs, but if you didn't appreciate it (you can like it or not, but you can't say it is not well-made), well, I'm not going to be negative...maybe just dismissive.

Gardner, much like his contemporaries Trey Edward Shults and Ari Aster is at vanguard of contemporary American horror. These films exist at a strange crossroads of Roman Polanski, the Mumblecore (mumblegore) movies pioneered by the Duplass brothers and Joe Swanberg, and the Universal monster series. (Jesus, I couldn't sound any more pretentious if I tried.) All of O'Hanna's films to this point have been incredible.

**Update: Discounting as "fake" a review that is different from yours shows a lack of conviction in your own opinions.

wizardofozoneReviewed in the United States on February 28, 2020
1.0 out of 5 stars
MOVIE WHERE YOU DECIDE WHAT WAS BEING CONVEYED
Verified purchase
Oh how I hate movie 'metaphysical thought thing' plots ..... This movie is on the same maddening level as 'Neverending' ...

The parts of this movie which pertain to actual physical events between two people left out the very representations of the romantic death between two people that the movie was trying to express ...They might have shown his memories and thoughts of all the beautiful times, then her thoughts of all of the troubling times to make the story clearer but no ... they obviously judge good storytelling by how confused the audience is !
17 people found this helpful

LindsayH.Reviewed in the United States on February 26, 2020
5.0 out of 5 stars
Not what you might expect...
Verified purchase
We really enjoyed this movie.
The trailer leads you to believe it's a monster movie, but, not quite...

There's something a whole lot deeper going on.

There are a lot of deliberately paced scenes (or "slow scenes," for those who prefer more action in a movie), but those are the scenes that clue you in on what is really going on with the main characters.

Give it watch!
12 people found this helpful

Concerned BuyerReviewed in the United States on February 14, 2020
1.0 out of 5 stars
Horrid amateur effort....'B' movie
Verified purchase
I was led to believe this was some great release. Even 'Rotten Tomatoes' gave it a 94!...But its amateurish junk with 70s special effects and even these are brief. Worst is, you have to pay to see it, when it should be an included 'B' film. I don't know who is giving this 5 stars...probably people associated with the production. BE FOREWARNED...before you decide to rent or buy this.
13 people found this helpful

PReviewed in the United States on February 15, 2020
5.0 out of 5 stars
Dreamy with top shelf scares, 100% worth it
Verified purchase
A bit of a slow burner in the best possible way, this one is totally worth the payoff--I literally jumped out of my seat and screamed at one point. Also Henry Zabrowski explains the nature of cats, so, obviously a must see. Jeremy Gardner, Brea Grant, Justin Benson, and Henry Zabrowski are as fantastic as ever. Highly recommend.
12 people found this helpful

Oscar R. GarciaReviewed in the United States on August 8, 2020
3.0 out of 5 stars
Relationship meataphor, Not Horror if that's what you expect
Verified purchase
As the description says when his girlfriend Abby abruptly leaves he begins to be besieged at night by a creature. Sleeping on a couch that bars the door he guards the house against this intruder. During the day he goes out drinking tries to convince others about his nightly besieger and makes desultory preparatory efforts of defense. Being that this is more about the relationship between him and Abby there are flashbacks to their life together shot in a bright vivid filter I guess meant to convey nostalgia for some forgotten happiness.

Here's what I HATED about this movie; the sound mixing was done, I assume for reasons, intentionally terrible. I mostly watch a movie like this for the dialogue and for some reason in the rendering everything was loud about this movie - except the dialogue which I could not hear very well because the volume was turned down as every song or creature shriek came blasting out. I also did not like the band being put in the movie; their sound is good and I could say I like their music but because they were the loudest part of the movie I felt like they were just put in there as a favor to a performer friend. It felt shoehorned into the movie; that plus being the loudest element of the movie was disruptive to the watching. The shotgun blasts were loud, the sound effects were loud but the dialogue track was simply too low to be heard well.

I did like that it had a creature and that it wasn't CGI which would have made a movie like this completely stupid. Though the creatures presence was so secondary to the intent of the movie as shown by how he acts in the end I can only assume it is meant as a metaphor for his past relationship emotional baggage. If so, that is a likable part of the movie. I don't normally go for such stuff but the chemistry of the actors, the use of colors for night and day and the very inclusion of a monster made it at least interesting. Further that it didn't devolve into some poisonous vitriol about humanity or hatred towards relationships is a plus. It kept the tone a little light which is refreshing in this current world setting of must be Gritty, Dark, Iconoclastic and Hateful that we live in. If only it weren't so loud.
One person found this helpful

6catdsReviewed in the United States on February 12, 2021
1.0 out of 5 stars
OUTSTANDING...if you have insomnia
Verified purchase
Clearly I am running out of quality movies to watch because there can be no other reason I kind of sat through this long winded, terribly plodding, absolute trash of a typical relationship tacky drama bs masquerading as a scary movie. NOTHING HAPPENS. NOTHING. People talk endlessly, NOTHING HAPPENS. You WILL fall asleep, it is an excellent cure for sleeplessness. I woke up towards the end to a guy singing karaoke & a “monster” attacking him briefly. This monster reminds me of the creatures in “The Village,” and is even less scary than a mask you could buy at Spirit Halloween 3 weeks after Halloween. Cheesy, boring, just plain stupid, and the typical Florida guy sidekick is so many cliches in one, sooo over the top hokey & tries waaaay too hard to be “funny.” Just a completely ridiculous, over hyped pos.
2 people found this helpful

Andrew "Big Ugly' HaleReviewed in the United States on September 20, 2020
4.0 out of 5 stars
"Wanna drink a case of this crap with me?"
Verified purchase
Romance. Horror. Karaoke. Relatable yet extreme characters. Worth one watch but probably gonna cause more than one discussion of inquiry. Good music also.

We spend the majority of the film watching Hank wallow in the dumps, missing his girlfriend of ten years, who left 4 weeks prior. On top of that, he is stalked every night for four weeks by some aggressive predator beast. Which one comes off as more of a concern? The runaway girlfriend. We get flashbacks of their relationship which is them intoxicated with each other, a budding romance.

When Abby finally shows up, she preaches to Hank how he doesn't look at her anymore, and is over the pursuit of her, ready for a new thing. As if we didn't spend the majority of the film watching him in a depressed and near psychotic state, not because an unknown creature is attacking his house, but because the girl he wants doesn't seem to want to be around anymore. Guess he didn't See her, Swirl her, Sniff, Sip and Savor her like a fine wine but she forgets that aged wine is better than new grape juice.

It's neat to see Justin Benson's nods to his other movies, like karaoking House of the Rising Sun and discussions on UFO's. I don't know what the message was here, or what was true: inner demons versus literal ones? As long as we defeat our demons, it doesn't matter.

Be warned, the last ten minutes are .... ah nevermind, just watch it.
One person found this helpful
See all reviews
Back to top
Get to Know Us
Make Money with Us
Amazon Payment Products
Let Us Help You
EnglishChoose a language for shopping. United StatesChoose a country/region for shopping.
© 1996-2022, Amazon.com, Inc. or its affiliates