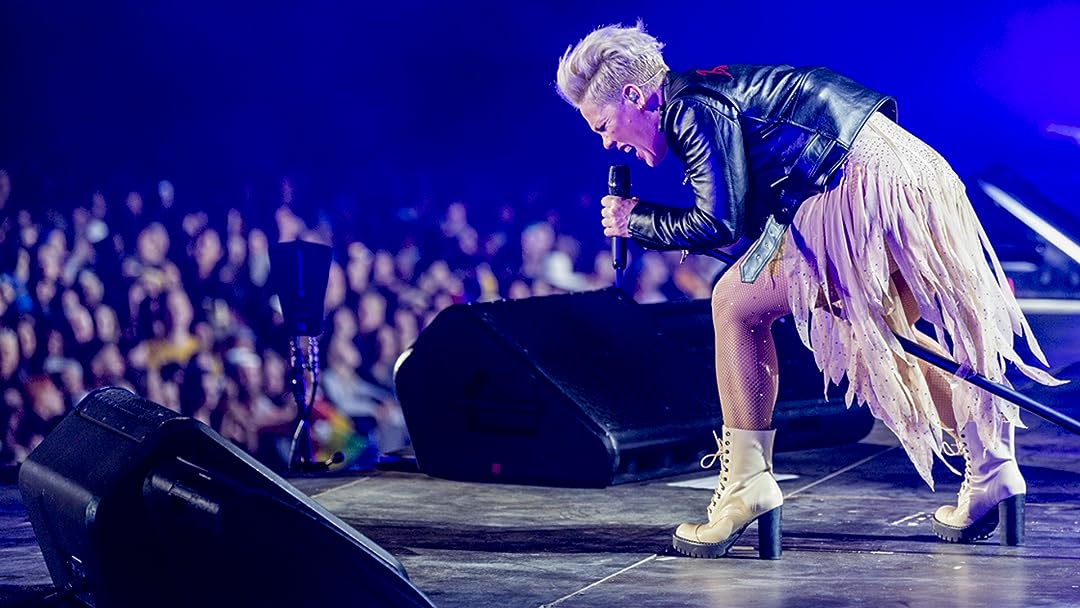 Aimee BethReviewed in the United States on May 21, 2021
5.0 out of 5 stars
What an amazing woman!
Verified purchase
I had never really noticed Pink's music but I saw a video of her giving advice to her daughter that brought tears to my eyes. So I figured the documentary was worth a try. And, wow, was it ever worth my time. It was so good I'm going to turn around and watch it again.

P!nk is an inspiration as an artist, as a mom, as a wife. The only bad thing I can say about her is that she makes us normal mortals look pretty lame. But that's okay too; some of us have to be normal so that others can shine.

Tina G.Reviewed in the United States on May 22, 2021
5.0 out of 5 stars
Will put a smile on your face…a wholesome documentary
Verified purchase
If you aren’t a fan of hers, you will be after watching this. And if you are a fan, you’ll likely love her more. If you’re reading this, go on and give it a watch as it’s sure to put a smile on your face. I genuinely enjoyed this one.

What’s it about? The film follows P!nk (Alecia Moore) when she’s on the road for her Beautiful Trauma World Tour of 2019 with her family accompanying her. Some of the topics include; behind the scenes at concerts/lodging, family (husband Carey and two children, Willow and Jameson), stories/videos of her life growing up (parents, singing), working out the kinks with concerts, motherhood, her dancers/backup singers/band (why she keeps the same people in her life vs. new ones- apparently the norm for many performers is to rotate people out after so long), her relationship with Carey and a little of his history, acrobatics during practice followed by onstage (this is amazing on it’s own, but how they implement it on film is excellent), performances including Wembley Stadium, and the kids. Keep watching as the credits roll for more video.

She appears to be a reasonably grounded person living an uncommon life. The kids add something special to this film. P!nk may be a superstar, but she’s not immune to kid shenanigans. Her and Carey come off like any other parents/caregivers- exhausted but happy.

Should you watch this? Absolutely, as it’s a nicely done documentary that’s relatable.

“Every door they walk through, every room they walk into, they’re like ‘Wow, there’s another person who followed their dreams.’ I think that that’s more of an education than I got.” (regarding having the kids on the road and not having a traditional life)

“Everyone always says, ‘I love P!nk ‘cause she never takes any sh!t.’ I eat sh!t for breakfast.” (Regarding kid antics)

“Willow told me last night that she feels invisible around Jameson. Broke my heart. Two-year-olds get more attention than eight-year-olds. That’s just the way it is, because at the end of the day, two-year-olds are helpless little pyschopaths.”

Parental guidance/trigger warnings: some swearing throughout but not excessive, she reads fans experiences- one was suicidal but described how her music helped them, drinking (mainly wine), talk about her parents divorce. Overall this is a pretty wholesome documentary- you see a lot of happy, normal family life and happiness in general.
47 people found this helpful

Jenna RosenthalReviewed in the United States on May 22, 2021
5.0 out of 5 stars
Nothing Short Of Amazing
Verified purchase
Pink never disappoints! I turn 35 this year and I've been a fan of hers since I was 13. She has always been so unapologetically herself and I love that. She has always stood out to me as not only an incredibly talented entertainer, but as a beautiful, amazing, strong, human being. We need more people like her in this world! All of that aside, this documentary is SO good! It was just released and I've already watched it twice. The only bad thing about this documentary was that it ended. I could have watched 5 hours of Pink! I loved the behind the scenes look at what her life is like on the road. Her kids are adorable and she seems like an amazing mother. It's unbelievable how she can juggle everything so well. In my book, she is an icon and will go down in history as one of the greats. I honestly adore her!
25 people found this helpful

CPReviewed in the United States on May 22, 2021
5.0 out of 5 stars
Yessss
Verified purchase
Rad human being, rad movie/documentary. Loved the intimacy, the sense of humanity and depth. Infinitely better than any other documentary I've seen by other big names in the music industry, that are quite superficial. She's got a brain to be proud of, I wish more women were like her.
28 people found this helpful

RickhReviewed in the United States on May 24, 2021
1.0 out of 5 stars
The show in 9 seconds...
Verified purchase
She loves her kids.
Her world-famous dirt bike riding husband is now her babysitter.
This is a rambling video of backstage "nothing."
There is no complete performance of a single song and only two or three short segments of something good.

There, you've seen the show.
21 people found this helpful

Melissa MReviewed in the United States on May 22, 2021
5.0 out of 5 stars
LOVE LOVE LOVE
Verified purchase
What an amazing look into the life of Pink on tour and with her family. Loved the performances and songs that were chosen to be included in this film.
22 people found this helpful

BikeRunSailReviewed in the United States on May 22, 2021
5.0 out of 5 stars
Awesome Mom
Verified purchase
I was a Pink fan before - not an over the top kind of fan - but loved her music. Listened to her tunes while I would run kind of fan was what I was. After watching this documentary - my admiration for her is truly overwhelming. As a woman, over the years I have enjoyed watching this groundbreaking artist grow in her career as an artist, as a wife, and as an amazing mom - I am in awe. She is so down to earth and authentic. Her children are delightful, her husband is grounded and equally awesome and together they are a truly amazing family. I look forward to seeing her children blossom and impact the world as she and her husband have.
14 people found this helpful
See all reviews
Back to top
Get to Know Us
Make Money with Us
Amazon Payment Products
Let Us Help You
EnglishChoose a language for shopping. United StatesChoose a country/region for shopping.
© 1996-2022, Amazon.com, Inc. or its affiliates