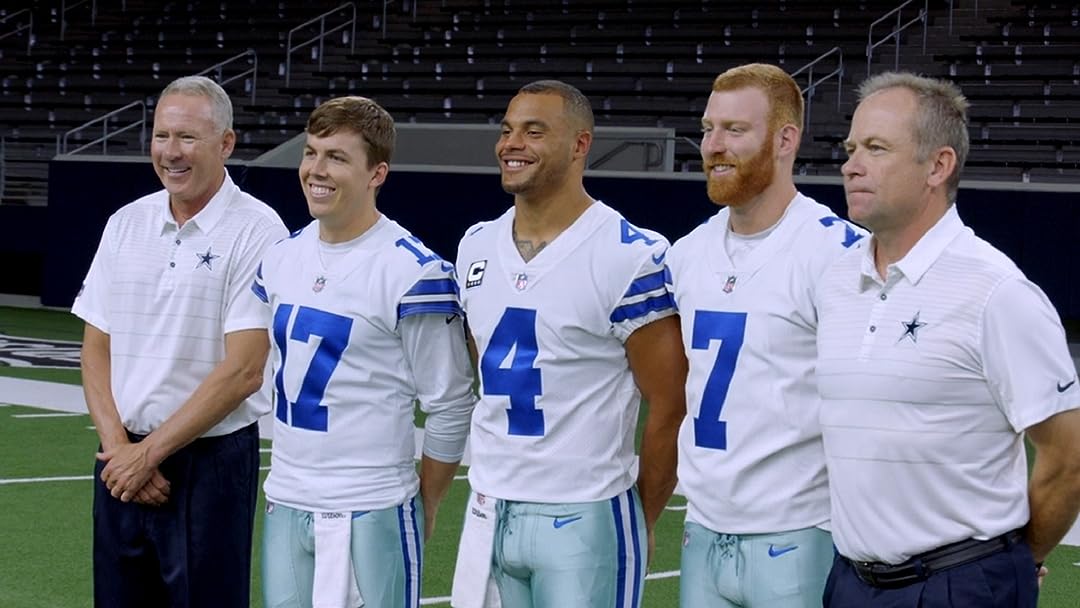 (174)
7.72018X-Ray16+
DALLAS COWBOYS: All or Nothing is the first series to take viewers inside the locker room, on the sidelines and off the field for an unprecedented look inside an NFL team. Season 3 follows the Dallas Cowboys through their tumultuous 2017 campaign, which they enter with Super Bowl aspirations and exit one game short of the playoffs after a roller-coaster of controversy and emotion.

jv1492Reviewed in the United States on October 6, 2019
5.0 out of 5 stars
Great Show
Verified purchase
This show was very interesting for people to see how the Cowboys prepare for there games and what happens in the locker rooms.
One person found this helpful

KT PintoReviewed in the United States on February 2, 2020
2.0 out of 5 stars
Started rooting for the other teams
Don't get me wrong, I luv this series! The Cardinals season was one filled with great and relatable players and coaches. The Rams season made you feel for the team, even though you couldn't figure out what the hell the coaches were thinking.
And then there were the Cowboys.
The good parts first: The Smith brothers. The offensive line going out to dinner together, the running back coach hosting dinner. Lee getting past his injuries. Morris with his '91 Mazda.
Now the rest of it: The coaches were bad. The head coach who was cocky when they won, yelled at them when they lost, and then yelled at them some more with no better results. He showed no support, no growth, no leadership... it was like he was a bad retail sales manager instead of a head coach. The coach with the stupid humorous videos and hugging which - compared to what coaches were like in other seasons of this show - did nothing do improve the game or the men. And those are really the only coaches that I remember, because they covered VERY LITTLE about the rest of the staff.
And then there was the Jones family. Ugh! Were they trying to make these people the most unrelatable, shallow, fake rich people ever? Half of the season was watching these people pretending to be a normal family, trying to make them likable. They weren't. Jones Sr.'s wife looked like she wanted to be anywhere but watching football, the daughter whose big contribution was to choose the colors the team wore, the son having the very phony dinner with his family, who were obviously having a scripted conversation, the grandchildren - or, at least, the ones playing football - that we were forced to watch play their games in their grandfather's stadium, and Jones himself flying around in his helicopter... and touching the players waaaay too much for comfort. I found the entire lot of them a cold, fake bunch, and felt really bad for any member who wasn't interested in football.
Oh, and the fact that the team based their entire season around Ezekiel Elliott, a man who was suspended for 6 games for domestic abuse charges... and we're supposed to root for him? And then spoiled, rich Jones trying to go against the commissioner because he wasn't getting his way? I had no sympathy for any of them.
And by the way, who was that "small", white, running back with blond hair who made a few touchdowns throughout the season who the show decided not to acknowledge at all? They made a big show of all the other players acting like loud, uneducated, nasty thugs (like the one guy who called a reporter dumb?), but this guy they blew right past all season long.
By the end of the season, I could care less if they won, could care less who was fired, barely saw any of the likable players, and couldn't wait to get on to the next season with the Panthers.

Fight ClubReviewed in the United States on April 30, 2018
5.0 out of 5 stars
The Jones Boys
Seriously well done this year. I am a Cowboys fan, but I am not a drink the KoolAid fan boy. I remember the day Jerry fired Coach Landry and the day he fired Jimmy and my view of him as an owner has been colored by those events ever since. That being said, I now understand why Jones keeps Garrett around. I understand why Sean Lee is such a huge part of that team and I now see the Jones clan as more human than perhaps I did before.

Coincidentally, there is some definite insight into why they let Dez go AND the time proximity to Witten's retirement adds a poignancy to several aspects of this show that will only be lost on the truly emotionally crippled.

This show is well produced, slick and has some excellent use of epic music scoring that you would expect with an NFL Films style production.

Any NFL fan that enjoys this genre - behind the scenes, all access - will enjoy this. I felt it was better than either of the first two seasons and FAR FAR better than the All or Nothing: Michigan series which felt like a giant Jim Harbaugh tribute film.
28 people found this helpful

SIGReviewed in the United States on October 8, 2018
2.0 out of 5 stars
Disappointing inside look of the DC
I'm a lifelong DC fan. I don't support them anymore. This series demonstrated how polluted the DC culture is with the constant profanity and lack of respect for the head coach by his assistants. This sleaze goes from Jerry Jones to Jason Garrett, to many of the other players and coaches. Not to mention over two decades of poor management. What NFL owner fires a coach (Jimmy Johnson) who wins two Super Bowls in a row? This organization has been mired in 23 years of mediocrity and mismanagement and I don't think this will change until: 1) Jerry Jones steps back - takes his hands off and hires a real GM, 2) Fire Jason Garrett and hire a GREAT coach with a championship winning track record, 3) Reset the corporate culture to a positive one, and 4) Christian players and coaches on the team need to step up and be the men God has called them to be. If people stop watching the games and buying the merchandise, someday the DC management will wake up and hopefully make real positive changes to this organization.
7 people found this helpful

ugadawgReviewed in the United States on September 27, 2018
2.0 out of 5 stars
First seasons were better
I love the concept but this season seemed to be a little stretched on material. There are points where if you didn't know better you'd think it was a special about Jerry Jones and his family, not the team. Sorry but I don't care about watching Jerry's grandson play high school football for 10 minutes and watch the Jones family eat hotdogs at the high school stadium. This series is going downhill if this is how future seasons will go. I hope it gets back to more of the first two seasons focusing on the team and their ups and downs, not the billionare owner and his extended family.

Stop pushing all your shows down our throats before and after every episode. We pay a yearly subscription for Amazon but I still have to watch commercials for other shows. This is making me less inclined to watch other shows, I don't have to deal with that on Netflix.
4 people found this helpful

Margaret ThatcherReviewed in the United States on June 23, 2022
3.0 out of 5 stars
Daddy Issues
This was a giant Hallmark card for the Jerry Jones, Jones Family, and the Jones’ helicopter. Family dinners, high school games, shirtless player hugs, flying over the commonfolk in their pathetic Hondas and Toyotas. Each episode is like browsing the social media newsfeeds of any of my fake, conniving, manipulative, controlling, backstabbing girlfriends, complete with tone deaf displays of wealth, feigned everyman gravitas, with a required heavy dose of charity "work".

We got to see a bit of behind-the-scenes with the Cowboys, like Jason Garrett's optimism, positivity and all-encompassing sense of responsibility devolve into blaming his losses on the character flaws of his players. Each guilt trip he lays on his players remarkably resembles my dad telling me I'm a loser because I'm lazy and weak minded.

I guess in the end, this season dredged up a lot of painful memories, but if was fun to watch because I'm glad someone else is stuck with my lame ex-girlfriends, and I don't even talk to my dad anymore so I don't have to take any of the crap these players need to deal with. That makes me feel good inside. Thank you, NFL films.

3 Stars!
See all reviews
Back to top
Get to Know Us
Make Money with Us
Amazon Payment Products
Let Us Help You
EnglishChoose a language for shopping. United StatesChoose a country/region for shopping.
© 1996-2022, Amazon.com, Inc. or its affiliates