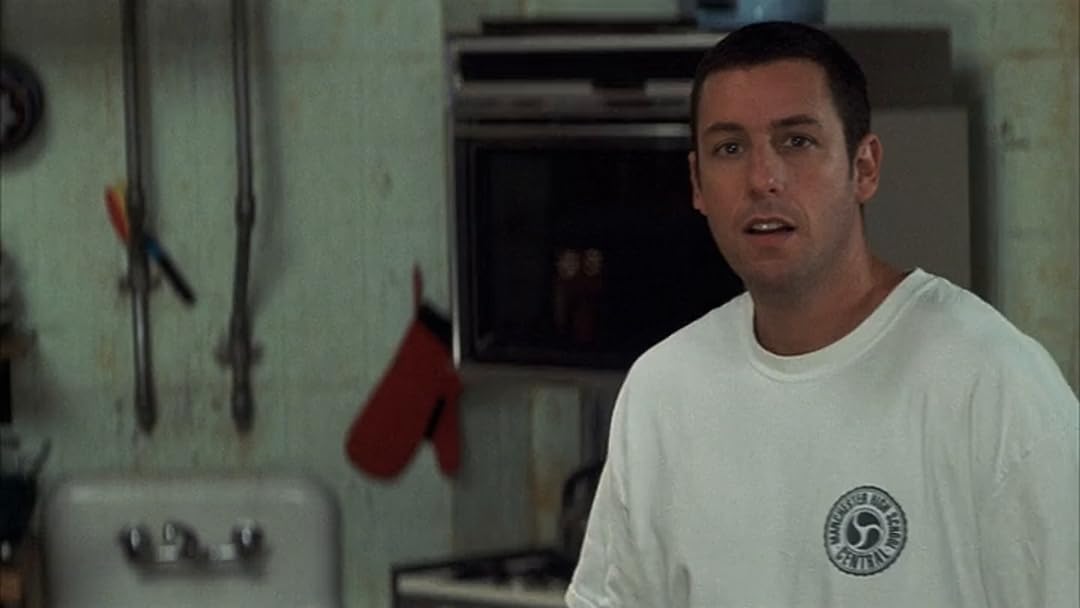 (2,757)
6.21 h 45 min2003X-RayPG-13
A timid businessman is wrongly sentenced to an anger management program, where he has his life turned upside-down by an ultra-agressive instructor who hardly practices what he preaches.

John BunyanReviewed in the United States on March 18, 2019
1.0 out of 5 stars
Horrible, horrible movie
Verified purchase
With the headline stars, and my daughters recommendation (who had seen the first scenes previously), we set out to watch this for a funny "birthday" movie with the teens in our house. While early jokes were crude, it descended to more and more sexualized crudeness (not really comical, just blatant over-the-top constant gential-reference crudeness). The idea of court-ordered anger management on a model citizen by a sociopathic doctor-in-charge with his own anger problem could be comical. But it was constant psychological inversion to the point of not being funny anymore, but just depressing or even oppressive. If there is any joke, it is the producers laughing at audiences who will be subjected to the same heavy-handed feeling they would get if they were actually imprisoned with psycopathic guards. I began to sympathize with the main character rather than feel any comedy. We turned the movie off less than halfway through, as the situation became inappropriate for the younger teens, and the adults were not enjoying it. I want a refund of my money, but Amazon does not have an easy way to find that, so I'm writing this review first to save you the money. Find another flick if you want to have fun.
12 people found this helpful

joel wingReviewed in the United States on July 14, 2021
3.0 out of 5 stars
Sandler and Nicholson who woulda thought they make the perfect duo?
Verified purchase
Adam Sandler is given a court order to attend Anger Management. There he runs into a bunch of exaggerated characters such as John Turturro and Luis Guzman, two of my favorite character actors. That’s just the start of the strong supporting cast. Plus Jack Nicholson is his doctor. He is the ultimate provocateur and instigator while being hilarious as well. For instance he gets Sandler to sing I Feel Pretty from West Side story in the middle of a bridge while all the other drives are passing by and cussing him out. It’s definitely one of Sandler’s better movies.
One person found this helpful

A. HarveyReviewed in the United States on March 7, 2021
2.0 out of 5 stars
Too much phallic symbol humor
Verified purchase
We have watched a couple Adam Sandler movies with our teens and so we thought this would be another funny film. The references to male genitals was endless, out kids and us opted to turn the movie off in the middle. Other elements of comedy where employed that were truly funny but were overshadowed by mentions of male body fluids or genitals. Too bad this isn't more like The Wedding Singer.
One person found this helpful

RoyeReviewed in the United States on January 5, 2021
1.0 out of 5 stars
How does this have so many good reviews?
Verified purchase
It's the good guy getting screwed by psycho people movie. Frustrating, not even funny and very (very) inappropriate. Save your money and your even more valuable time and find something else to do.
2 people found this helpful

Christine M.Reviewed in the United States on July 28, 2021
5.0 out of 5 stars
The best medicine for anger is laughter.
Verified purchase
After his roles dealing with pshycology in One Flew Over the Cookoos Nest, Shinning, and As Good As it Gets; Jack Nicholson's comedic portrayal of a phychologist/ anger management counsler is profoundly humorous. Adam Sandler's is matched up perfectly with his role playing a charachter who the physycologist deems as anger introvert. Any one with this type of anger can relate, as real anger issues and life issues are dealt upon with comedic outlook.

The best medicine for anger is laughter. This comedy was filled with laughs for those who appreciate its humor.

J. BarnesReviewed in the United States on February 8, 2014
5.0 out of 5 stars
Anger Management dvd
Verified purchase
I have purchased this DVD twice because I enjoyed it so much that I have given the first copy away to to a friend in need of Anger Management.

Although the story has a lot of humor there are many serious truths to the story of managing one's anger.

Adam Sandler plays his role so well as the inhibited geek unwilling to express his true feelings for his fiance played by Marisa Tomei. Whilst Jack Nicholson plays the role of the supposedly shifty anger management consultant.

The stars in this movie were excellently supported by by several other stars who assumed lesser roles but who all played their parts most convincingly.

You really should watch this movie for both laughs and for serious contemplation of what might happen to us when we fail to allow ourselves to be ourselves.

Tom WaylettReviewed in the United States on August 4, 2018
4.0 out of 5 stars
What do you have to do to manage your anger?
Verified purchase
Any movie with Jack Nicholson in it is bound to be extraordinary. Adam Sandler is obviously hilarious. My boss recommended this movie to me. Now I recommend it to others. It is hilarious and quite the charade between the two of them. You'll never guess the punch scenes. That is why it is so funny. Go ahead, get the movie.

JennyReviewed in the United States on May 5, 2021
5.0 out of 5 stars
I feel pretty
Verified purchase
The disc and case were in perfect condition and the movie played beautifully. I love the comedic duo of Sandler and Nicholson in this, an odd combo that seems to work.
See all reviews
Back to top
Get to Know Us
Make Money with Us
Amazon Payment Products
Let Us Help You
EnglishChoose a language for shopping. United StatesChoose a country/region for shopping.
© 1996-2021, Amazon.com, Inc. or its affiliates