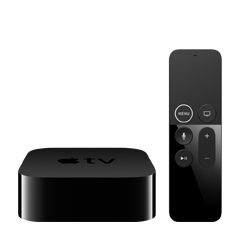 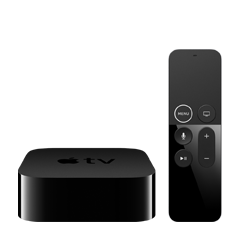 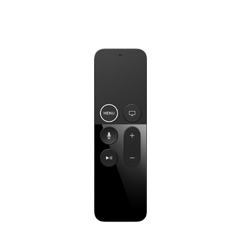 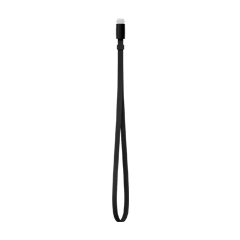 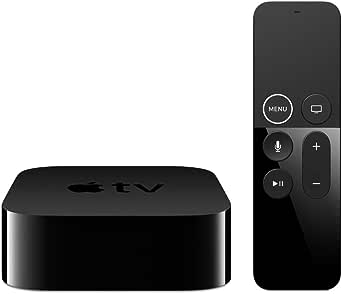 Secure transaction
Your transaction is secure
We work hard to protect your security and privacy. Our payment security system encrypts your information during transmission. We don’t share your credit card details with third-party sellers, and we don’t sell your information to others. Learn more
Details
Ships from
Amazon.com
Sold by
Amazon.com
Support: Free Amazon product support included
What's Product Support?
In the event your product doesn’t work as expected, or you’d like someone to walk you through set-up, Amazon offers free product support over the phone on eligible purchases for up to 90 days.
To access this option, go to Your Orders and choose Get product support.
Apple TV (32GB, 4th Gener... has been added to your Cart
Add to your order

Other Sellers on Amazon

4.8 out of 5 stars
4.8 out of 5
14,882 global ratings
How are ratings calculated?
To calculate the overall star rating and percentage breakdown by star, we don’t use a simple average. Instead, our system considers things like how recent a review is and if the reviewer bought the item on Amazon. It also analyzes reviews to verify trustworthiness.

D. J. Burns
5.0 out of 5 stars Apple TV is the best
Reviewed in the United States on March 4, 2018
Verified Purchase
I've tested the Fire Box, Roku Box (the new one), and the Apple TV and the Apple TV box works far better than the rest. No buffering; no waiting. It interacts with Amazon Prime and Netflix without a problem. I have a Netgear X6 AC3200 and combined with the Apple TV box it's unbeatable. I pump Directv Now thru it and the signal is great. I got rid of all my cable boxes and have the Internet only. Saved over $75 a month.
Read more
556 people found this helpful
Helpful
Report abuse

LittleJoe
3.0 out of 5 stars Disappointed after coming home to Apple
Reviewed in the United States on July 15, 2018
Verified Purchase
I loved my 3rd gen Apple TV, but after a while it was lacking apps and features so I switched to a Fire Stick. Used that for a couple years and was pleased with it to an extent, but there was too much advertisements and I didn't care for the layout. I'm also in the Apple ecosystem so I was missing some features like Airplay and Apple Music. Decided to spend the money (a lot more than the Fire Stick) and get a 4th Gen. Overall I'm disappointed. The biggest flaw with the new Apple TV is the remote. Whoever thought this touch pad on the remote was a good idea should be fired. It's TERRIBLE and quite honestly a somewhat crippling flaw. Also many of the apps on the TVos App Store are terrible. For the price theres too many flaws here. If this thing was $50-100 it might be easier to swallow.
Read more
398 people found this helpful
Helpful
Report abuse

Lizbeth
5.0 out of 5 stars airplay with apple products
Reviewed in the United States on April 14, 2018
Verified Purchase
I bought this product because we all have apple products, I want it to play the MacBook Pro on my tv and this makes it possible with the airplay function. I am very satisfied with my product, I can finally watch my Mac on the tv...no wires wow and sound too
Read more
219 people found this helpful
Helpful
Report abuse

Trek
4.0 out of 5 stars So Many Remotes!
Reviewed in the United States on September 4, 2018
Verified Purchase
I have some older TV's that I want to watch MLB on. And maybe some NetFlix. I originally thought one Smart TV would be enough but once I got a Smart TV, I wanted all my TV's to be internet-connected. I have an iPhone and an iPad, so the Apple TV was a logical choice. It was easy to setup. I like that I only have to login once to my apps. I also like that I can use my other Apple devices as input devices as the on-screen keyboard is tedious.

The remote is not intuitive. I can deal with that. What is harder for me (and more so for my family and guests) is that having the Apple TV gives me yet-another-remote. I often have to turn on the TV for others. I have to use multiple remotes (we have a sound bar also) to get to a program or to switch between cable and streaming content. I get calls for help.

Now a plus for Apple TV: My one Smart TV just had the wireless stop working. Without a wireless or wired connection, my expensive Smart TV is an expensive Dumb TV. I immediately realized that I would have to get yet-another-Apple TV for my home. That is a much cheaper alternative than another 65" Smart TV.
Read more
142 people found this helpful
Helpful
Report abuse

Kassius
4.0 out of 5 stars Similar to Roku with exception of a few more apps
Reviewed in the United States on April 30, 2018
Verified Purchase
My home was had a Roku 4, Roku 3, Roku TV and two Roku sticks (Express). I replaced the 3 with the Apple TV. There are pros and cons with both, mostly one having certain apps that the other doesn't. For instance, I wanted to have access to a Nest app that Apple TV has and Roku doesn't. Besides that, both function much the same as far as the interface goes. The Arial screensavers on the Apple TV are stunning when the device is asleep. The Roku screensavers, although not likely important for most people, are boring imho. The difference between the two will likely come down to apps as many of the popular iPhone apps can be used with the Apple TV, giving you more variety. Still most of the favorites like Sling TV, DirecTV Now, Vue, Hulu, NetFlix, YouTube are all here.
Read more
245 people found this helpful
Helpful
Report abuse

Reclusive Reader
5.0 out of 5 stars Super fun for the whole family - even those who have trouble with technology
Reviewed in the United States on March 27, 2018
Verified Purchase
Bought this for my parents, and they have loved being able to see their vacation photos and videos on their giant TV screen, as well as online videos from YouTube, Netflix, Amazon Prime, and other sources. The Siri remote makes everything so easy - you just ask her verbally, and SHE figures out which screen something is in, how you open it, etc. We also used it to play Drawful 2 with three generations of family (including several teenagers who are often too cool for everything...), and they all had so much fun they invited off-site friends to participate in the game's audience. (Finally - a way to interact with them that doesn't involve begging them to get off their phones! XD )
Read more
152 people found this helpful
Helpful
Report abuse

F. E. Hindmarsh
5.0 out of 5 stars Apple TV
Reviewed in the United Kingdom on October 25, 2018
Verified Purchase
Bought to replace an earlier model, this Apple TV is just what we wanted. Easy catch up on BBC iPlayer etc and streaming from an iPhone or iPad. This 4th Generation is much easier to use and has more apps already available. Just plug in and play. Love it.
Read more
24 people found this helpful
Report abuse

Papadelta
5.0 out of 5 stars Brilliant but HDMI cable issues
Reviewed in the United Kingdom on February 8, 2019
Verified Purchase
Be aware that the HDMI cable must fully engage in the slot so that the cable shoulder sits against the case, otherwise there is no signal.

I struggled to find a cable in my box that would fit, including premium cables, despite them connecting to other devices, without problems. (had the same issue with a 4K unit that I returned as I thought it was faulty)

However, once I got a cable that would fit, installation was a breeze, using my iPhone.

I can confirm that it runs: BBC iPlayer, ITV hub, 4OD, My5, Amazon Prime and NowTV.

I can also control it with my Harmony Ultimate remote.
Read more
11 people found this helpful
Report abuse

Amazon Customer
1.0 out of 5 stars Why not include the cables?!?!
Reviewed in the United Kingdom on March 19, 2020
Verified Purchase
Why not tell me I need an HDMI cable at the time of purchase!!! Instead of the instructions saying “Apple TV is way to set up. Connect on end of an HDMI cable (not included).... FFS either include the cables needed or be clear that they also need to be bought!! This might be a fantastic product who knows until my HDMI cable arrives!!
Read more
8 people found this helpful
Report abuse

Lee UK
3.0 out of 5 stars Great machine, only half the equipment needed in the box.
Reviewed in the United Kingdom on July 20, 2020
Verified Purchase
Very good machine, a million times better than the earlier generation version I had. Straightforward to use, and relatively easy to navigate. The remote is a bit faffy, with a mind of it’s own. I really like the fact that it is rechargeable.

What is just not good enough is the failure to supply a HDMI lead or a plug for charging. I know a lot of people have the odd charger plug knocking about the house, but that’s not good enough. I want the equipment needed, not to have to hunt around for the stuff. Considering the price I expect more.
Read more
2 people found this helpful
Report abuse

Jerry
5.0 out of 5 stars Why buy Apple TV?
Reviewed in the United Kingdom on May 22, 2019
Verified Purchase
Ok, first off, it’s from Apple so it going work, and work well, but the remote, it’s a tiny work of art, metal back, rechargeable with cable included, only a few buttons and a track pad, and being Apple, it just works. Enter your Apple ID put your iPhone or iPad nearby and it takes the WiFi info from it and in 5 mins you’re watching telly or a movie. I swear the picture quality is better than my old Amazon fire stick. Well pleased. Thanks Apple and Jonny Ives!
Read more
4 people found this helpful
Report abuse
See all reviews
Back to top
Get to Know Us
Make Money with Us
Amazon Payment Products
Let Us Help You
EnglishChoose a language for shopping. United StatesChoose a country/region for shopping.
© 1996-2021, Amazon.com, Inc. or its affiliates