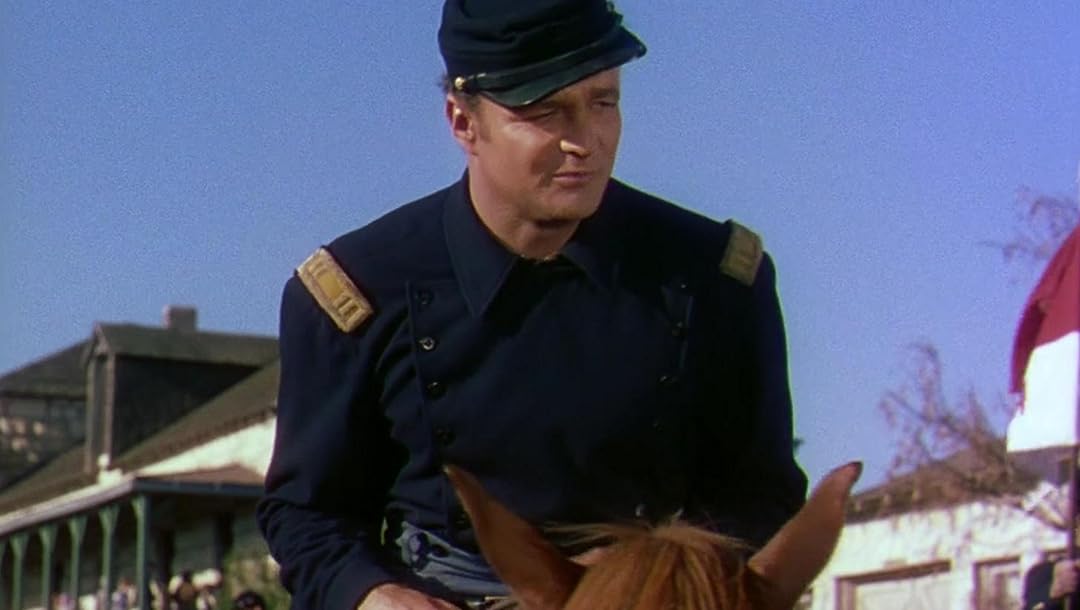 (174)
5.91 h 45 min1953ALL
Apache brave Toriano has returned to his people after schooling in the Eastern U.S. "He comes in peace," say cavalry officers and townsfolk. "He comes for war," says cavalry scout Ed Bannon.

pcsnakeReviewed in the United States on September 29, 2019
5.0 out of 5 stars
Heston and Palance in a great western
Verified purchase
First of all if you don't like Heston and Palance in a western which is not screwed up by
bad script and bad directing, then you really should not watch westerns. This is a good
movie and it kind of sets the bar pretty high for some of the other westerns which look
pretty clownish compared to this. That is what 2 and three star ratings are for. I save the
one star ratings for BAD movies. But this is a 5 star movie.

Jim RobertsReviewed in the United States on November 27, 2013
4.0 out of 5 stars
Pretty Much a Guy Thing
Verified purchase
I am drawn to stories based, at least in part, on fact or on the life of a real individual. This is such a story. It is well acted with a strong cast. The characters are powerful at times, which enhances the entertainment aspect of the movie. The action vs. storyline sequences are mixed in such a manner as to keep the film from dragging or being dull at any point. Probably more of a guy's movie, though several of the key actors involve male stars who were quite popular with the ladies at the time this movie was released. Through the years, I've probably viewed this film a half-dozen times, having seen it first while serving with the U.S. Army in Germany a long time ago.
9 people found this helpful

Professional StudentReviewed in the United States on June 28, 2021
5.0 out of 5 stars
Plot twists at every angle: Expect the Unexpected
Verified purchase
Most of the time, I found myself thinking: "Didn't see that coming!" But, maybe, it is because the film was inspired by a true story (which is partially shared in the beginning and at the end of the movie). I gave 5 stars mostly for the storyline.

Parl GuthrieReviewed in the United States on February 28, 2017
4.0 out of 5 stars
"Arrowhead" Much more than just Charlton Heston, Jack Palance!
Verified purchase
I don’t think I have ever seen this movie before, at least I don’t remember it. I may have, but at my age I have a problem remembering a lot. I must say that it was interesting, I’m a huge western fan so any time I find something that holds my interest it’s worth watching. Although it brings up a lot of questions.
5 people found this helpful

SpudReviewed in the United States on June 22, 2019
5.0 out of 5 stars
One of Charlton Heston's Best Movies!
Verified purchase
This is a good movie! Heston does an excellent job portraying his character which was based on a real life cavalry scout. The movie was shot entirely on the location where this story took place. I like how the cavalry was shown as rough and tough guys with dirty uniforms. It makes it look like these guys have seen a lot of action.
One person found this helpful

Judy MaeReviewed in the United States on March 24, 2014
5.0 out of 5 stars
All you want from a western
Verified purchase
This is my kind of western! The cast is ideal with Charlton Heston as maverick scout Ed Bannon. The Army is trying to talk peace with the Apaches and move them to reservations in Florida, but Bannon's activities seem to go against this new policy.

Toriano, the son of an Apache chief, is aptly played by Jack Palance. When Toriano returns from an Eastern education, Bannon is suspicious of his motives and their mutual distrust makes for a very exciting western.
One person found this helpful

Jaime ContrerasReviewed in the United States on March 11, 2014
4.0 out of 5 stars
Raw and rugged western
Verified purchase
Charlton Heston plays Bannon, an embittered and suspicious cavalry scout who warns of deception and an Apache uprising. Sadly, no one believes him until it becomes too late. Jack Palance plays Toriano, his Apache foe and self-proclaimed 'the prophesized fearless one. The interplay between Bannon and Toriano is full of bravado, testosterone and gusto. Brian Keith plays a 'by-the-book' cavalry officer who is suspicious of Bannon's hate-driven actions. This is one of my favorite westerns.

Rick LaneReviewed in the United States on February 11, 2013
5.0 out of 5 stars
Arrowhead (2013 re-release)
Verified purchase
This review is for the 2013 Warner Bros. release of Paramount's, Arrowhead. There isn't much difference between the Warner release and the original Paramount release. To sum it up, Warner didn't release it as their own, but to re-release for they were out of print. The only difference is on the barcode in which it says, "Distributed by Warner Home Video."

Overall this is a great Western and I would recommend it to anyone who wants to add to their collection.
14 people found this helpful
See all reviews
Back to top
Get to Know Us
Make Money with Us
Amazon Payment Products
Let Us Help You
EnglishChoose a language for shopping. United StatesChoose a country/region for shopping.
© 1996-2022, Amazon.com, Inc. or its affiliates