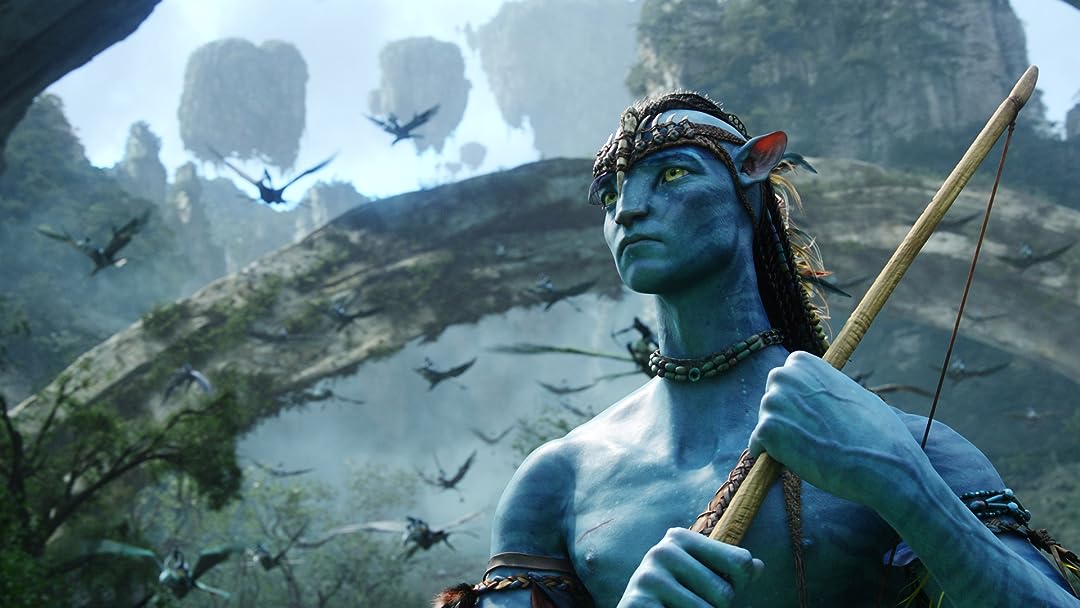 (35,576)
7.82 h 41 min2009X-RayPG-13
From Academy Award winning director James Cameron (Aliens, The Abyss, True Lies, Titanic) comes Avatar, the story of an ex-Marine who finds himself thrust into hostilities on an alien planet filled with exotic life forms. As an Avatar, a human mind in an alien body, he finds himself torn between two worlds, in a desperate fight for his own survival and that of the indigenous people.

Robert A. RaymondReviewed in the United States on October 31, 2018
1.0 out of 5 stars
Great movie, but not for the blind.
Verified purchase
I am giving this movie a one star review because I am a blind man, and I was directed to this disc, because I thought that this would have a dvd in it with audio description since the blue ray does. Since I have no need for a blue ray player, and only need the dvd for sound, I always look for standard discs. This may be a great film, but as a blind listener, you will not enjoy this unless you have a blue ray player.
68 people found this helpful

MichaelReviewed in the United States on May 19, 2018
5.0 out of 5 stars
Must Have - 3 Mind Blowing Movie Versions - What 16 More Minutes does, will bring TEARS! Beautiful Collector Binding! BUY IT!
Verified purchase
[[ASIN:B0044XV3R8 Avatar (Three-Disc Extended Collector's Edition)]] OH MY GOSH! THREE COMPLETE MOVIES, THE THEATER VERSION, THE 8 MINUTE LONGER RERELEASE VERSION AND A 16 MINUTE LONGER COLLECTORS CUT EDITION. YOU CANT BELEIVE WHAT 16 MINUTES MORE CAN DO FOR THE POWER OF THIS EPIC! Also has tons of cut removed Scenes. It comes in a holder with very clever book style DVD holder Folders, its a TIMELESS gift and $21.00 its so WORTH IT. If you have TwighlightForever, it would remind you of this layout except the DVD Folder Design is SO MUCH EASIER to remove and not damage the binder! A MUST HAVE if you are a Collector of the AGES of WORKS to TRUE Sci FI ART![[ASIN:B0044XV3R8 Avatar (Three-Disc Extended Collector's Edition)]]
54 people found this helpful

ChuckReviewed in the United States on November 25, 2018
5.0 out of 5 stars
Wow. Wow. Wow. Beyond Amazing!
Verified purchase
Avatar is Easily one of the most amazing films I have seen in my life. So, I'm sitting here attempting to summarize my thoughts about this film, but it was so beautiful that I think my simple words will not do it justice.

Avatar illustrates with astounding eloquence that so very much of what many people spend their entire lives pursuing is, in the end, just trivialities. But there are those among us who shine their light upon the Transcendent. And one of the greatest privileges is to truly inwardly "See" what is Transcendent -- and then to live our lives for the Transcendent.

Omar C.Reviewed in the United States on April 16, 2020
4.0 out of 5 stars
Really good, but no longer superb
Verified purchase
This is more a review of the presentation on modern 4k sets. I'm sure this was flat out amazing when it was released on blu-ray back in the day. Today, a good 4k set is more revealing. Does this film have any imperfections? To be honest, not really. Among FHD only releases available, Avatar is still tops. Compare this to the LOTR extended edition blu-rays. In some of those scenes, there is unsightly noise around certain objects. I thought it was slightly drizzling in a couple of scenes...nope, just noise. Avatar is leaps and bounds above this. Additionally, it really shows its prowess when the Eywa scenes come in. Spectacular contrast and vivid color enhance the definition. Still, when compared to the 4k HDR presentation of The Matrix, it's easy to see where Avatar falls short. Close-ups are not as crisp. Contrast throughout the film is a little weak. Because they did such a phenomenal job on the blu-ray for FHD displays, they probably saw little need to rescan and HDR grade the film. I bet, however, that if they did that the 4k HDR edition of Avatar would be exceptionally hard to beat.

The audio still rocks and competes with the best of them. If you have a stereo setup, make sure to put the film in English 2.0 mode. You'll be surprised at how much more alive and dimensional this is over the 5.1 track. I'm sure if you have a 5.1 setup, the 5.1 track will be awesome, but with a stereo setup flip back and forth between the two and you'll immediately hear (and feel) the difference.

Overall, great film and still very engaging even though it can't quite keep up with a more modern large screen 4k display (I'm viewing on a TCL 65R). Very much worth $10 or less that you can grab it for now.
11 people found this helpful

James MacKayeReviewed in the United States on January 19, 2015
5.0 out of 5 stars
Be aware: all these reviews are for all versions
Verified purchase
This review is for the 3 disc Blu-Ray version that has the theatrical version, re-release version, and extended version.
I mention this first because there have been several Avatar releases (DVD, 3D, Blu-Ray, extended, collections, etc. etc.) As you read all the reviews here, do notice that ALL the variations are included, and so you need to be sure you are reading the one that pertains the the one you're considering purchasing. This is not a review of the movie, but specifically of this Blu-Ray version.

I don't expect to get a 3D TV, but as a both a fan of this movie and someone interested about the art and craft involved in film making I thought it was worth waiting for this version.
And boy, howdy, was it!

The transfers are beautiful and (while much of the extras are "fluff") there's more than enough great extras to be well worth it. Certainly the $25 I paid at the beginning of 2015. I especially recommend the "Message from Pandora" which documents Cameron's journeys to the Amazon jungle (one with some of the main cast members) to help publicize the dams being planned that will displace thousands of people. If one of the reasons you love this movie is because of Cameron's well-known deep involvement and knowledge of technology's collision with our planet, you will find this really informative.
If you think he's just another tree-hugging liberal spewing ecological propaganda with this movie....well, you probably aren't interested in the movie (or this feature) anyway.
46 people found this helpful

JohnWReviewed in the United States on December 11, 2015
5.0 out of 5 stars
Fantastic Movie - Improved with 3D
Verified purchase
This movie has a fantastic story and some of the most beautiful images I have seen in a motion picture. I originally saw the movie in IMAX 3D and quickly purchased Blu-ray version when it was initially released. While the regular Blu-ray is great, I missed the WOW factor of seeing the movie in 3D. So when I upgraded my home theater with a 3D projector and I wanted this to be the first movie I watched.

Amazing!! I had intended to just watch the first few minutes, to test it out, and ended up watching the entire movie. I do not recommend testing this out at 11 pm when you have to be at work early the next morning. But as I write this, I have no regrets.

If you enjoyed this movie and want to improve your home viewing experience, I highly recommend purchasing the 3D version.

Note - The 3D version is the standard theatrical release.
39 people found this helpful

RowanReviewed in the United States on December 16, 2018
5.0 out of 5 stars
Great for kids, adults and family to enjoy on many levels!
Verified purchase
This was a replacement to the 1st Avatar I bought. The 2nd disc was so scrated it was unwatchable. Amazon sent me another copy and I've had no problems with it.
As for the movie: it's a testament to the of what real actors and CGI we can accomplish together if it's done right and be transported to another world and be sucked into the story completely. James Cameron is an absolute genius. The story itself is one of self discovery, toleration, love of one another and of taking a step back and really seeing what we're doing to our own planet and resources. On the surface it's a very enjoyable movie but underneath that it's very thought provoking. All and all a great movie especially with 3 different versions you can choose to watch. The extended directors cut has 16 minutes added I hadn't seen before and the behind the scenes extras are great. BUT THERES NO GAG REEL *sigh. Guess you can't have everything lol.
6 people found this helpful
See all reviews
Back to top
Get to Know Us
Make Money with Us
Amazon Payment Products
Let Us Help You
EnglishChoose a language for shopping. United StatesChoose a country/region for shopping.
© 1996-2022, Amazon.com, Inc. or its affiliates