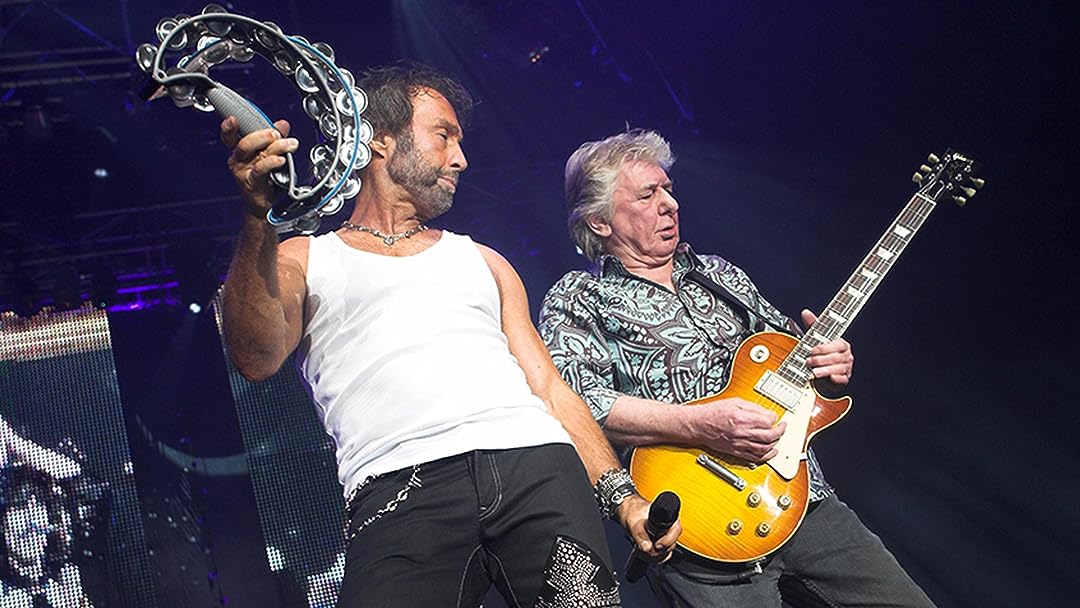 John WernerReviewed in the United States on November 28, 2019
5.0 out of 5 stars
Pretty Much A Total Shock...In A Great Way!
Verified purchase
Where to start? Respect…Any band that can capture some of the fire in a bottle about 4-decades on deserves loads of it. Fact is this reunited 3/4ths BC does. They are worthy. It helps to have a very basic and primal R&R catalog that is derived from the blues and R&B. It has a inner connection more than the current fad or whatever. Then there’s the weapon of destruction: the voice. Paul Rodgers is pure down in the streets rock and roll spiritualness with impressive range and depth. Arguments aside, he is one of the top 5 greatest rock vocalists of all time. More impressive is he still has great pipes and like wine he’s advanced in a mature way. This band has the sound, look, and feel of Bad Company at a high peak. It grabs me a bit more because at this late date it wasn’t expected to be so good. Its more than good.

Kirke and Ralphs deliver at 90% or higher here so absolutely no complaints, especially Kirke and Ralphs pulls it off stupendously with the able help of seasoned sideman Howard Leese. It’s an aural assault of succinct lead rips and Phil Spectorish power chords with a hell of a foundation. Credit Lynn Sorrensen for walking in and filling some talented shoes of the missed Box Burrell. Burrell was one of the very few bassists who would play a fretless bass in concert where there was no parachute for missed stop positions. He was an utterly fantastic bassist and Sorrensen seems to have both respect and talent enough to make Burrell’s absence more of a celebration of the band and less of a hole.

This concert is very well produced, recorded, and presented. The edits do not distract even as they won’t be confused for the more lingering Austin City Limits type. The recorded audio is a gem. Two channel is all you need and if you opt for the surround version it is nice for live without any odd cues and great ambience. This concert only has a few reviews and I’m a bit taken back. Any Prime member who loves real meat and potatoes rock and roll should not only take a look, but it should impress enough to garner quite a few reviews I’d say. This is likely the best video of what the power of Bad Company was/is and at this late date it is like an unexpected huge gift.

Tim RobersonReviewed in the United States on January 11, 2019
5.0 out of 5 stars
Bad Company is, well Rock at its best!
Verified purchase
I enjoyed this concert so much. Its all of the ole basic Bad Company songs just the way I like them. What makes these guys so special to me is that there is not all the glitz and glamour its just straight up Rock! I use to listen to them all the time back in the 70s and 80s and never got tired of hearing them. I always listen, put them away for a while, then one day get in the mood for some foot stomping jump up and shout rock and out Bad Company comes to make the day!
One person found this helpful

Mikey77Reviewed in the United States on April 23, 2019
5.0 out of 5 stars
Bad Company...still great to this day!
Verified purchase
Watching Paul Rodgers and his band mates do up the Bad Company playlist was AWESOME. No, this is not a bunch of old rockers trying to pull it together one last time...it is a great celebration of a great band coming together to deliver an awesome concert! Paul has been around since the 60's with FREE, and still has one of the best rock and roll voices to this day. Enjoy at full volume!
One person found this helpful

Joe from ColoradoReviewed in the United States on September 18, 2019
5.0 out of 5 stars
Terrific Sound Quality
Verified purchase
If you start this at 13.45, you will truly hear how amazing Paul Rodgers voice still is, let alone forty years ago when he was cranking out these wonderful tunes.

The sound engineers should be applauded; every instrument is clear, concise, and distinct, but Paul's vocals truly shine and surely beats my first eight track that I jammed to.
One person found this helpful

Geasy MoneyReviewed in the United States on February 7, 2019
5.0 out of 5 stars
One of Rock's greatest vocalists.
Verified purchase
From listening to cassettes of Bad Company in an '80 Datsun 280zx, cruising through the Southern mountains, to watching this show today; I'm constantly reminded of the fact that Paul Rodgers is one of the all time great rock vocalist of our time and that Bad Company help shape Southern Rock for my generation. So happy to blast this show through the house tonight. Watch this show very loud, if you have an idea of what it was all about.
4 people found this helpful
See all reviews
Back to top
Get to Know Us
Make Money with Us
Amazon Payment Products
Let Us Help You
EnglishChoose a language for shopping. United StatesChoose a country/region for shopping.
© 1996-2022, Amazon.com, Inc. or its affiliates