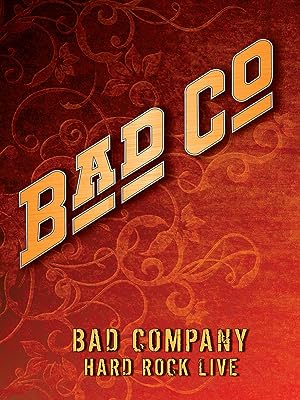 Included with Qello Concerts on Amazon for $7.99/month after trial

Watch with Qello Concerts
Start your 7-day free trial
Add to
Watchlist
By ordering or viewing, you agree to our Terms. Sold by Amazon.com Services LLC.
Write review

Edward Reviewed in the United States on March 1, 2021
2.0 out of 5 stars
Audio is really lacking on this disc.
Verified purchase
Good concert, poor sound quality. For a Rock & Roll concert recording this bluray really lacked the gusto for sound, no bass, the group that mixed the sound for this Disc sure didn't know what real quality audio is. I Will keep this bluray disc, but i do regret buying it. O-well live and learn i guess. Do not recommend this to anyone planning on listening to it on a good sound system, you will be greatly dissapointed.

DANIEL RYNOReviewed in the United States on May 28, 2016
5.0 out of 5 stars
One hell of a rock band still on top after all these years
Verified purchase
Bad company is one of my favorite rock bands they still sound fantastic Paul Roger's voice hasn't changed at all. The picture on the Blu-ray is very good the dysfunction HD master sound rocks it is a wonderful concert. I have several bad company concerts and I love them all. The band still rocks it has the hits I especially like burning sky and gone gone gone these are my favorites all the tracks are top notch. If you want too see a real rock band watch this disk it is awesome I also recommend the bad company Weblew concert.
I purchased this with prime and the shipping was fast and the price was right. If you want this concert spend the extra bucks on the Blu-ray it also has a pcm 2 ch track for the people that don't have 5.1.
4 people found this helpful

CamberReviewed in the United States on February 14, 2017
5.0 out of 5 stars
Still rockin'
Verified purchase
I'm glad to have rediscovered Bad Company nearly four decades after I first heard them. While their more 'honkey tonk' songs aren't really my taste, I do like most of the songs on this DVD, and overall these guys rock. Paul Rodgers definitely has one of the best voices in all of rock music - ever - and that alone is a reason to buy and enjoy this DVD.

Also, some other reviewers complain about the sound quality, but I find it to be reasonably good.

Stephen BredenReviewed in the United States on January 31, 2012
5.0 out of 5 stars
The Best Reunion Concert Ever
Verified purchase
I have to laugh at the technoids who have commented on this reunion concert over its so called failings; apparently they have never struggled with 70's vintage live videos of this group (and there are incredibly few examples to be found). How about we listen to the music first and critique the surround mix later???

In my opinion, this is the best reunion concert I have ever heard or watched on video, at least on a musical level. These guys really show the additional 30 years of practice, and this concert sounds better than any other example of the group that I can find from the 70's. I am not a patient person, but I have watched every bit of this concert at least 12 times. Paul Rodgers is simply twice as good as he ever was back in Bad Company's heyday, and Simon and Ralph sound just incredible, the additional 30 years of practice being very obvious. Howard Leese adds a great deal to the show as well, and never detracts from the basic lineup.

This 62 year old lead vocalist has got to be heard and seen before he finally retires. I feel so lucky that I will get to see him in Vegas on March 31st, and I only hope that show is half as good as this one.

A solid outstanding for music and technical merit.
6 people found this helpful

BRIAN BOYLE, Thunder Bay, OntReviewed in the United States on January 13, 2012
5.0 out of 5 stars
110% From 3/4 of Bad.Co
Verified purchase
This is my first review that I've sent in, so go easy on me. I've bought several Bad Company & Paul Rogers Dvd's over the years & have generally been happy with all of them... except for one flaw- Mick Ralphs missing. I realize Mick was on the Wembley Dvd, but the amount he played was minimal and he didn't seem to have much life too him. I don't know if this was agreed upon within the group or that Mick maybe felt that he wasn't up too par on that particular night & decided too let Howard Leese have most of the axe time. D'ont get me wrong, Howard is a very competant player, but Ive been waiting years too hear these songs done just right & they were on the Hard Rock Dvd more than the Wembley one. Mick seemed too be so much more alive and on fire, strutting around and having the time of his life. He's the type of player that doesn't waste a note, and that quality seems too be missing from a lot of speedier players around. The three original players were playing like it was their last night too play and the other two players knew that they were guests in the band, and too let BAD COMPANY shine.
Both Wembley & Hard rock are excellent Dvd's- fairly similar set lists, all songs done with a lot of passion & fire, but I would have to give a slight edge too the Hard rock concert.

PS: If after viewing either of these Dvd's you don't come too the conclusion that Paul Rodgers is the most soulful rock singer since the late sixties and is at the top of his game at age 62, then please drop me a line and educate me.
5 people found this helpful

RichardsonReviewed in the United States on February 15, 2010
5.0 out of 5 stars
A blast from the past for baby boomers Bad Company rocks!
Verified purchase
Anybody who wants to argue that Paul Rodgers isn't the greatest blues rock voice of all time should watch this DVD...or his recent outings with Queen, or his Solo DVD or grab the FREE DVD from 40 years ago and then apologize. This is a very good set of Bad Company classics...filmed and recorded well and presented with a bonus CD...for less than the cost to park at a concert venue!!!

For once I can't really argue with the song selection and unlike the previous Bad Company DVD they stayed away from FREE material even though Simon Kirke (Drums) was in that group with Paul Rodgers as well. Mick Ralphs (the bands original guitarist and co songwriter on many of their classics) is on board for this DVD which is a nice bonus. Ralphs isn't going to be compared to Hendrix but he does have a strong pedigree (Mott The Hoople) and its obvious Rodgers was happy to have him there.

Overall...for anyone, particularly guys, who were high schoolers in the 70's this will bring back loads of fun and rockin memories...or a Rock n Roll Fantasy or two!!
2 people found this helpful

M. S SwansonReviewed in the United States on April 2, 2010
4.0 out of 5 stars
"What you're getting is rough and ready..but its real."
Verified purchase
Paul says this to the crowd after Mick hits a couple clinkers in his solo to Live for the Music and he's right. Some of this show has a rough feel to it, but that's not necessarily a bad thing. The first thing you notice is that Paul Rodgers has really preserved his voice. He sounds strong and gives a rocking performance throughout. Simon is also right on driving everything with his drums. Mick Ralphs looks a little frail and you get used to it after a few cuts. Howard Leese backs him and never tries to overshadow him. IMO Leese adds much to rounding out the sound and throws out a few leads for good measure. Rock and Roll Fantasy has that dual guitar part that the boys nail beautifully. Overall, a fine show with lots of energy and love from the crowd. The set list was perfect for me and the band really nailed Boz Burrell's Gone, Gone, Gone in the first half. I was also happy they threw in Sweet Little Sister. One more thing I liked was the CD came with the Blu-Ray. You have to pay for that on Paul Rodgers Live in Glasgow, which I also recommend, but this one is better.
One person found this helpful