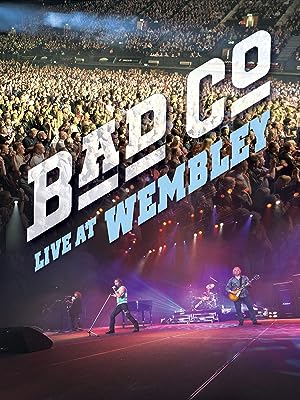 (337)
7.81 h 29 min201113+
There are not many bands who can claim to be rock legends but Bad Company are the real deal, featuring the original line up of singer Paul Rodgers, drummer Simon Kirke and guitarist Mick Ralphs, we watch them blow the roof off a sold out Wembley Arena, London in this hit packed show.

VirtuosoReviewed in the United States on January 17, 2013
3.0 out of 5 stars
Paul Rodgers holds it together
Verified purchase
The positives: Paul Rodgers is amazing, as one expects, as one of the greatest vocalists in rock history. Mick Ralphs, who shakes off the dust to put on a credible performance, with superb backing musicianship from Howard Leese (from girl rockers Heart), and a strong technical bass effort from Lynn Sorensen. The song-list is extensive, with all the hits. Addressing the dark side: the crowd: they seem to have never seen the boys in the 'glory days', which happened to be around 1975. And, sheer *age* has stifled things quite a bit (except for Paul Rodgers, who is the ultimate showman throughout). I love Mick Ralphs...he has never been a virtuoso, no, but his contributions to the totally unique Mott the Hoople (before Bad Co.) are legendary. Here, he is around 62, and it is quite impressive he agreed to attempt to replicate the old show. He seems to perk-up when Rodgers plays 'Seagull' with him on acoustic guitar (quite heartening). Ralphs is again young on the 'tribute-to-the late Boz Burrell' called 'Gone, Gone, Gone' (Sorensen shines, as you might expect). The finale is impressive 'Deal With the Preacher', where Mick lets it 'all hang out'. This is worth viewing if you heard the band when they were superstars (mid-70's), and love em'. Otherwise, you might not 'get it', like the crowd apparently didn't that night. *Three-stars* because you can't really bring back what you were when you were a young lion, sadly for us all. Thank you, though, Paul, you brought it all back as best you could.
10 people found this helpful

boc_spectreReviewed in the United States on May 6, 2014
4.0 out of 5 stars
Great concert, great songs
Verified purchase
This is an outstanding pick of songs from a classic rock band. The only band member not present is the deceased bass player. The songs are sung outstandingly, and accurate. They did only one thing wrong on this release. They recorded it at 120,000 seat stadium. Too big, too many people, too much background. Sadly I purchased this one with another blu-ray by Foreigner. That one puts this one to shame...the difference? They recorded it in a very small hall in Memphis...not a stadium. Overall performance is a 10 but engineering and management decisions is an 8. Sorry but blu-ray and a great audio system shows all your engineering mistakes
4 people found this helpful

Mr. CrankshaftReviewed in the United States on February 1, 2014
5.0 out of 5 stars
IT'S BAD COMPANY ... IT IS THE BEST !!
Verified purchase
A great performance by a GREAT band .... Jann Wenner and his crew of sycophants should vote them into the Rock & Roll Hall of Fame !! I mean come on ... fronted ny Paul Rodgers, arguably one of the Top 10 rock / blues vocalists / front men ever ... and they have a huge catalog of superb rock & roll ... this show is a document of their prowess as a live act ... too bad Boz Burrell had passed away ... yet his replacement Lynn Sorensen is a solid, if not spectacular player who gets the job done in a no frills manner.

Other than the "Brian Howe Years" I am a fan of all things Bad Co. ... this DVD should NOT be missed !

keith dudzakReviewed in the United States on July 12, 2019
5.0 out of 5 stars
great concert with three original surviving members of the band
Verified purchase
30 years later the band plays all the hits from the first six albums and they still sound amazing Paul Rodgers voice is better than ever and Mick Ralphs guitar playing does not miss a beat this is a must have for any Bad Company fan especially if your like me and never had the opportunity to see them live
2 people found this helpful

GTRJUNKIEReviewed in the United States on June 14, 2017
5.0 out of 5 stars
Great show
Verified purchase
When I started watching this, it took me a while to really get into it. However, as the show went on it grew big time. The band is in excellent form. Having 2 guitarists in the band thickens up the sound and, as always, Paul's voice is amazing. The video and sound are excellent. Fans of the band should pick this up. You will not regret it.
4 people found this helpful

K. BaerReviewed in the United States on March 21, 2016
5.0 out of 5 stars
Are you a real Bad Company Fan.??? Then buy this , NOW......
Verified purchase
What words could I use to describe how much I love the music this group has put out.. MOVING, VERY MOVING.!!! There, Best I can come up with today.. From their first album to Rough Diamonds.. I have found myself singing along, tapping my foot and thinking about several of their tunes over the years.. If you call yourself a fan and you do not buy this.. Then at least, find a friend who has bought this.. And watch this with your friend.. Long Live Bad Company... ROCK ON !!!!
4 people found this helpful

bmac32Reviewed in the United States on March 18, 2013
4.0 out of 5 stars
30+ Years
Verified purchase
Although this leaves me a little wanting. It is live and years have slipped by, like 30 years! Audio is fine other than Paul's mic might be turned a bit loud so at times he he seems over modulated. I usually watch these once and then turn it up enough to hear it on the Florida room. Have noted some strange shots and for me the camera work wouldn't be something I want to watch over and over. Took the audience time to get into the concert, seems many didn't know what to expect. By the end they were pretty much in to things and it left me wanting more.
2 people found this helpful

Kindle CustomerReviewed in the United States on October 6, 2011
5.0 out of 5 stars
Must have for the Bad Co. fan.
Verified purchase
The Blu Ray picture and DTS Master Audio are fantastic. Having Mick Ralphs back makes it feel more like the real Bad Co. than the previous Bad Company Merchants of Cool DVD. Simon Kirke is still there and still one of the best rock drummers of the era. What can you say about Paul Rodgers? The guy has found the fountain of youth! He has not lost a thing and may even be better than ever. The addition of guitarist Howard Leese from Heart, fills out the sound very nicely. He aptly handles most of leads, which were never Mick's strong suit. If you're even a casual fan of Bad Co., Get it.
2 people found this helpful
See all reviews
Back to top
Get to Know Us
Make Money with Us
Amazon Payment Products
Let Us Help You
EnglishChoose a language for shopping. United StatesChoose a country/region for shopping.
© 1996-2022, Amazon.com, Inc. or its affiliates