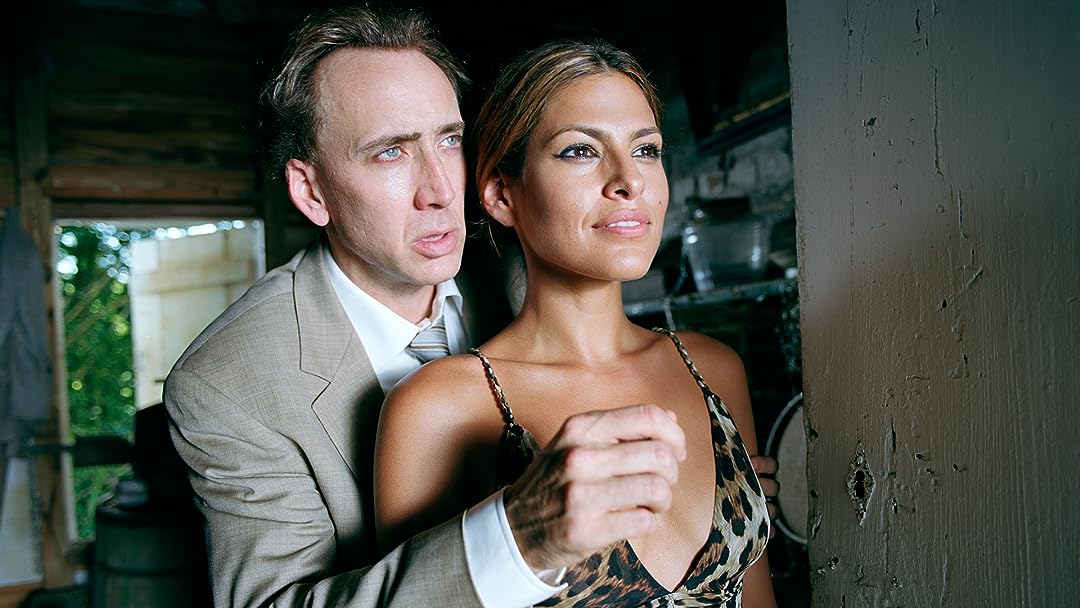 ProfessorReviewed in the United States on August 15, 2019
5.0 out of 5 stars
Insane and brilliant
Verified purchase
Werner Herzog has made over 50 films in his long career, both documentary and fiction. Many are considered "crazy." (Fitzcarraldo and Heart of Glass come to mind). Crazy or not, his films have been universally acclaimed. He's just that good.

Herzog is always behind the curtain winking at you, even during the most distasteful scenes. Although the title and the main character would suggest a remake of Aber Ferrara's 1992 Bad Lieutenant, it's not. It's entirely Herzog's weird vision.

It's primarily a cop procedural about the murder of a family in post-Katrina New Orleans. But it's way more than that. Playing the "bad" cop, addicted to painkilling drugs due to a back injury and becoming more and more addicted throughout, Nicholas Cage literally chews up the scenery in this film, in one of his most over-the-top performances ever. He's doing what he does best. And we care about his character.

The film is a parade of dichotomies. It's lurid, dark, violent, and hysterically funny; senseless and sensible; farcical and tragic; sentimental and heartless; repellent and magnetic.

The conclusion is suitably insane, but it made perfect sense. I loved it. It's positive but bittersweet.

This is over the top, crazy filmmaking at its absolute best. And it's guaranteed to keep you watching.

Warning: This movie is not for kids, including teenagers!

Lady ReaderReviewed in the United States on June 23, 2021
5.0 out of 5 stars
Bad Lieutenant: Port Of Call New Orleans - An Awesome, Awesome Movie!
Verified purchase
This is a well directed and well paced movie about the day to day life of A New Orleans Police Lieutenant and his colleagues. This is not a Fast-Action Movie. There is plenty of sensible action with out any blood shed.
Nicholas Cage is a corrupt and an addicted, smart and a fearless Police Lieutenant who finally gets the Drug Dealer responsible for the mass murders that the Drug Dealer has committed but will not be caught because the investigation hits a snag. This Lieutenant in his own way, makes the Drug Dealer get the Debt Collector and his Hench men who are working for a Loan Shark, who is after the Lieutenant who is in debt due to his Live Pro-Football betting. The Debt Collector just feels like setting up his own extorsion rules as he goes on his debt collections. So, the Debt Collector, likes to milk the Lieutenant for an exorbitant amount, because the Lieutenant is late in his payment.
Nicholas Cage has done an excellent job as the Lieutenant. Eva Mendez has acted well as the Lieutenant's drug addicted, prostitute girl friend who also works in concert with the Boy Friend.
Photography is very good of the Gulf and the Back Waters. I liked the elegant homes and the apartments with the interior decorations, the pastel colors of the walls, the furniture set up and the lamps and lighting. All the details of the sets are exceptionally well done with elegance; where ever, the elegance is needed. The story and the script are very good. Good Cast and Director. Director HERZOG is one among the best. Extremely Well Directed Movie.
Please watch this Gem and Enjoy. I did.

Todd M.Reviewed in the United States on November 10, 2018
3.0 out of 5 stars
He wasn’t as “bad” as the other Bad Lieutenant.
Verified purchase
Harvey Keitel was much better but if you’re a fan of Nicholas Cage this is one of his better films and but it wasn’t much better than okay. It suffers from predictability and length and those are often too hard to overcome after you’ve seen a few bad cop movies there’s not a whole lot you can do to differentiate one from another so putting it in post Katrina New Orleans was about the best they could do and that didn’t help it all that much. Cage does have some redeeming qualities that are out of character considering the title of the movie and that makes him a little more likeable than needed. He has the guy with a bad back nailed and if you’ve ever had that issue you’ll know what I mean in watching his movements.
5 people found this helpful

area manReviewed in the United States on December 10, 2020
2.0 out of 5 stars
So much to like about this movie ...
Verified purchase
... except for the movie itself. Great actors, great director ... but ... naw.
This movie is surprisingly uninspired and uninspiring. But there is something to Nick Cage's hulking around like Quasimodo that comes off like an inside joke. In fact, there are elements to the film that are at times very campy and leave you wondering if there's something your missing. The direction seems always to verge on self-reference, some revelation where you face palm yourself and say, "Of course, that's what it was about!". But it doesn't. It doesn't lead anywhere, despite all of the clues. It doesn't work. In fact, it's kind of boring.
In spite of the high ratings, this film really deserves about a 4/10. It's not much of an action film, nor does it succeed as satire if that was the intention.

Amazon CustomerReviewed in the United States on July 10, 2018
4.0 out of 5 stars
One of Nicolas Cage's last decent movies.
Verified purchase
Somebody involved with the production of this film had an odd fascination with reptiles, if you can get around that then this is an entertaining movie with a unique mixture of appearances from once popular celebrities like Val Kilmer and Xzibit and almost popular celebrities like Michael Shannon and Jennifer Coolidge. Interestingly enough, I had never heard of this movie and did not know it was almost 10 years old until I went to go give it a review,It has aged well in addition to being entertaining. I thought for a moment Nicolas Cage still had some decent acting left in him....
One person found this helpful

Russell SReviewed in the United States on March 18, 2017
4.0 out of 5 stars
Pleasantly surprised.
Verified purchase
Color me shocked! Nicolas Cage does a great job as a bad cop or is he a good cop in a bunch of bad situations? He does a great job as a cop that loves his job but definitely plays fast and loose with the law and tailors it to whatever he thinks it should be and does whatever he thinks should be done. I definitely cannot say too much about this movie primarily because it is very complicated and to give away one thing would in turn give away other things. I will just say that as cop movies go this one is all over the place but in a very good way.
8 people found this helpful

Jeff WignallReviewed in the United States on October 21, 2014
5.0 out of 5 stars
Nicholas Cage is fantastic, a dark but wonderful film--and a blues-singing iguana
Verified purchase
I love Nicholas Cage in this movie! Wow, what a wild and demented character he plays, but oh, so real, I'm sure! He's the bad (really bad) cop with a heart that seeks justice. His version of justice is a bit skewed, but I'll let you find that out on your own, lol.

Cage is a brilliant actor and I can't think of anyone else--not anyone--that could have nailed this role the way that he did. I hope he makes more movies like this. And watching it on blu ray is fan-tas-tic!

The photography of post-Katrina New Orleans is also incredible. A great movie. Dark, not for the weak of heart, but wonderful and strange.

How are you going to not love a movie that has iguanas singing the blues?
11 people found this helpful

HoosierGuy12Reviewed in the United States on April 12, 2010
5.0 out of 5 stars
Shoot him again...his soul is still dancing
Verified purchase
I have to say this is Nicolas Cage's better performances in a while, reminds me of early Cage, that he can actually do a good movie and not Hollywood fluff, plus doesn't hurt when teaming up with an intriguing, genius, masterful story teller, visual director as Herzog.

But this Bad Lieutenant is far far different than the gritty, dark, depressing original, played by perfection by Keitel.

Cage plays a New Orleans cop Terence McDonagh who is addicted to painkillers, cocaine, just drugs in general, likes to gamble, has a prostitute g/f (Eva Mendes), has a recovering alcoholic father. He roams New Orleans basically free, wielding badge and gun (.44 magnum that he tucks in his belt)and steals from junkies, or he is taking drugs from the police evidence room. He plays the role on such a fine line where it doesn't seem he is "over acting" or being over the top, a perfect performance, as he tries to solve a murder of a family and bring in a suspected drug king pin played by Xzibit. We see McDonagh go through police procedures all while coked up. Unlike Keitel he isn't an amoral cop, he is smart and believe it or not does seem to have some morals somewhere in his soul. McDonagh is a street wise, smart, crooked, junkie cop, he's in his own surreal world.
He plays the tormented cop very well, always on edge, off kilter, then has some somber moments, again great acting performance by Cage.

Herzog's direction here is great, some will argue basically nothing is happening in this movie, no violence, we watch Cage solving this murder, going from Point A to Point B. Herzog's direction is tight, and the way he lets some scenes linger on a crocodile and the iguanas it was weird, and yet surreal, almost as if we now see what McDonagh is going through while all doped up and working.

I felt the original was awesome, a masterful movie but yet so dark, so sad, but unflinching, and depressing, this Bad Lieutenant Port of Call New Orleans didn't leave me with that feeling, it was Cage's performance that hooked me and had me laughing at some of the crazy scenes. If anything worth checking out for Cage's performance
10 people found this helpful
See all reviews
Back to top
Get to Know Us
Make Money with Us
Amazon Payment Products
Let Us Help You
EnglishChoose a language for shopping. United StatesChoose a country/region for shopping.
© 1996-2021, Amazon.com, Inc. or its affiliates