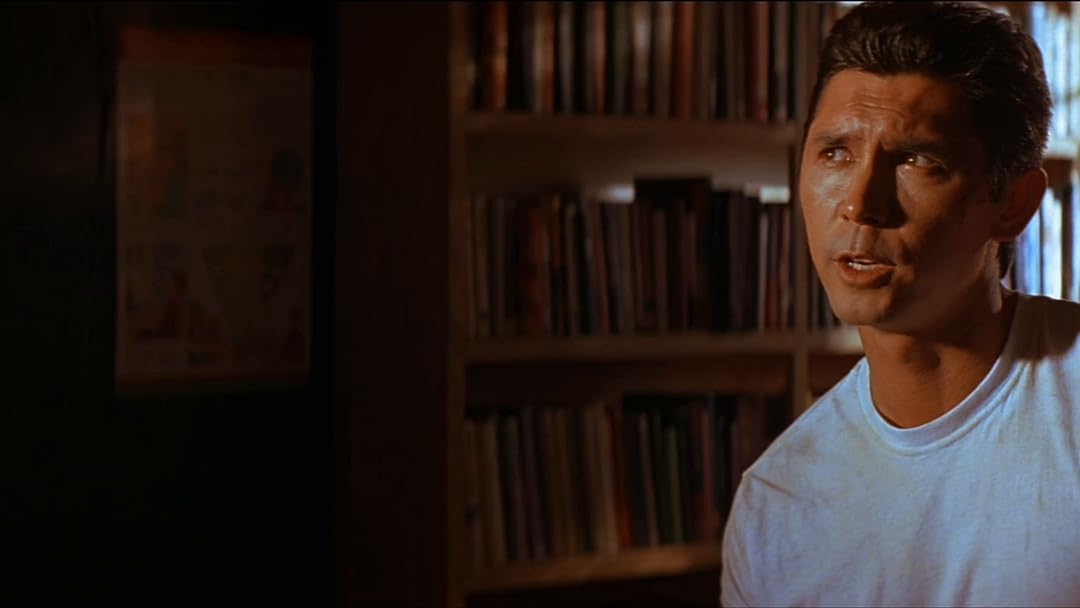 (562)
1 h 31 min1999PG-13
Something is coming in the night. The dark air fills with the sound of flapping wings and menacing shrieks. The night has wings and fear takes flight. Swarms of genetically altered bats have descended upon a sleepy, small Texan town and no one is safe. The only hope to stop the growing tide of bloody devastation is a zoologist who studies bats, her assistant Leon, and the local sheriff.

Geoffrey F. ArnoldReviewed in the United States on July 2, 2021
4.0 out of 5 stars
Just sit back and let it happen...
Verified purchase
...because sometimes you just gotta let go and enjoy the madness.

Look, it's not Shakespeare, okay? It's just fun...if you allow yourself to simply go along with the premise.

Phillips and Meyer make a decent team, and the "sidekick" comedy relief is okay, not overdone...too much. The evil bad guy was well played, too.

Bats, engineered bats, acquire a taste for people. But you kind of already figured that out, given the nature of the idea...that bats are now a threat to humanity. What's not to love?

And threaten humanity they do.

One of the cool things here is the minimal CGI employed. The swarms were CGI, BUT, a few scenes at night where you see the bats flying in silhouette are actual shots of real bats. Yeah, a bit of trivia. But in the town, that's CGI. But there are "real" bats, puppeteer managed models, which were cool. Back in 1999 CGI was still rather expensive, so you used it judiciously to save money. The models is a great feature because they're real.

The story is pretty typical, just now with bats, so you know the tale already, which actually makes it easier to enjoy. You know how the tale will progress and sometimes that's actually nice. No surprises, just a fun take on an old plot...with bats now.

Really, just get the popcorn and sit back with friends and loved ones and go with it.

We knocked one star off for profanity, not that it was too bad. It was actually okay, but in a few instances uncalled for.

Red SonyaReviewed in the United States on October 16, 2020
2.0 out of 5 stars
Bad actors but fun movie
Verified purchase
This is a well made low budget movie, but with bad actors.

It’s funny how the female scientist had only a few scratches on her, when she was attacked by a bat in the street, and everyone else was ripped apart. There is also a scene at the end, where she runs fast, but starts limping, when she catches up to the sergeant. She just didn’t fit the role of a TOP expert. She was way too pretty and her hair style never changed.

Her co-partner didn’t fit his role either. He acted way too nonchalant to be a top expert in anything. He was just there for comic relief. That was obvious from the beginning.

And the sergeant looked way too pristine in every scene, like he just stepped out of the shower. His hair was slick back in every scene. And his uniform was ironed and pressed in every scene without a mark or smudge, even though the country was on the brink of death.

These 3 were the main actors, who led the whole expedition. There was no one else. Everyone else was in the background and had a few lines and that’s it. These 3 did everything alone, without a team or additional support.

The mad scientist who created the bats didn’t have much of a role either. He just showed up everywhere in his suit and bag. It was kind of funny.

DanchiReviewed in the United States on September 6, 2020
5.0 out of 5 stars
I Love this movie
Verified purchase
I tried to catch it on TV every time it came on but I haven't seen it in a long time. It's campy and ridiculous but a good way to spent a couple of hours on a Saturday night. Big plus is no nudity, no love scenes, a little bit of gore and profanity but for the most part pretty tame. I probably will watch it again.
4 people found this helpful

Avid readerReviewed in the United States on October 1, 2020
3.0 out of 5 stars
Silly fun
Verified purchase
When asked about the unusual behavior of the bats, the "evil" scientist said: “Because I am a scientist. That’s what we do.” The movie was a lot of fun. Campy, but really covered no new ground. The tired story of a scientist developing a weapon, thinking he can control them. There is a lot of action, which is fun, but that doesn’t cover for the gaps in the story. They have a plan for the bats, and the military brings the unit to the site, and they are attacked by the bats and killed. Later, it is shown the unit has been put in place deep underground. How did it get there, as the bat attack was while it was above ground? The bat scientist and sheriff have an hour to do their ‘magic’ yet jets are already in the air to level the area. Hard to think the jets would be that far away. But it is entertainment, just don’t think too much, nor expect anything new. Early on, the mayor was told to get everyone in the town inside, and when they get there, most are outside walking around. The mayor said: They are Texans, and they think they know everything. So yes, that is some of the silliness. And one knew the stage was then set for a massive bat attack.

ACJeanReviewed in the United States on August 14, 2020
1.0 out of 5 stars
So bad, it's just bad.
Verified purchase
You know how some movies are so terrible that they are almost good again? Even if it's just for the comedic value? Yeah, this ain't that.
2 people found this helpful

StargazerReviewed in the United States on July 16, 2021
5.0 out of 5 stars
A believable story about genetically altered bats
Verified purchase
The environmentalist in me could so see the origin of these bats in the movie so that allowed me to get interested in it. I hadn't bought it earlier when I was replacing Lou Diamond Phillips Filmography cuz these kinds of movies are a little intense for me. But thankfully scenes of the attacks weren't gory. I didn't have to look away. This was a believable & entertaining movie. As always LDP was awesome in the movie

KayciReviewed in the United States on August 6, 2019
2.0 out of 5 stars
Terrible, but I watch it anyway
Verified purchase
Unfortunately, I went though a Lou Diamond Phillips phase, and as a 19 year old with no self control I have purchased many of his movies. As most of his movies are sh*tty B-movies anyway, this one is certainly one of the lower quality ones, and even ranks below Route 666 and The First Power. Definitely overpriced for the quality of the movie overall - but hey, he wears a cowboy hat and fakes a terrible Texas accent and it’s beautiful.

wanda hardwickReviewed in the United States on October 28, 2015
5.0 out of 5 stars
Bats
Verified purchase
Great movie. Anyone that is a fan of horror movies and Lou Diamond Phillips will want this movie in their
collection. A zoologist that studies and has a love for bats is called in to find and destroy some genetically
altered endangered species of bats. She is called in by the scientist who injected the bats with a virus creating
the mutations. Her desire is to capture and save the bats until she finds out just how dangerous the bats really
are. After finding out that these genetically altered bats are spreading the virus to other species of bats she and
the sheriff (Lou Diamond Phillips) find that they are in a race against time to save the world from the rapidly
spreading virus. They have got to stop the bats before they spread from their little town to more populated areas.
Fun movie to watch.
4 people found this helpful
See all reviews
Back to top
Get to Know Us
Make Money with Us
Amazon Payment Products
Let Us Help You
EnglishChoose a language for shopping. United StatesChoose a country/region for shopping.
© 1996-2022, Amazon.com, Inc. or its affiliates