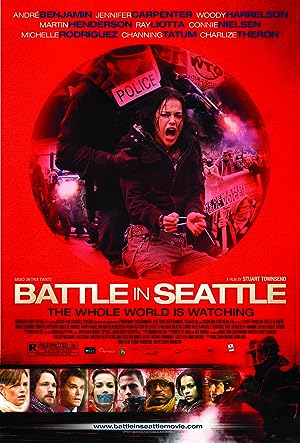 (146)
6.71 h 39 min2007R
In November of 1999, Seattle broke into a full-scale state of emergency as thousands of peaceful protesters gathered in resistance to the World Trade Organization. The city's mayor, a SWAT cop on the streets and his pregnant wife, and four demonstrators are caught in the crossfire as their lives intersect in the ensuing riots. Stuart Townsend, in his debut writing and directing role, seamlessly merges actual footage of the devastating chaos with brilliant performances.

Ken DetroReviewed in the United States on May 7, 2019
2.0 out of 5 stars
Interesting
Verified purchase
Neither good nor bad. consists of an expensive cast uttering lines that appear to have been written by committee. The movie appears to have an agenda, that of creating a false dichotomy. If a nonviolent protest features interlocked humans then the only solution is to poison them and use terrible violence. It would be insidious were it not so obvious. As it stands its not a very good movie. Kinda boring interrupts the suspension of disbelief several times a scene with dumb dialogue and an annoying aim of normalizing the ridiculous.
10 people found this helpful

JimReviewed in the United States on December 11, 2019
1.0 out of 5 stars
Rattled in Seattle
Verified purchase
I am a proud member of the Silent Majority and have no interest in watching a bunch of people blowing their corks over political issues. I only watched this because Charlize Theron was in it but she had a small role and it was just as boring as the rest of this movie. After wasting about an hour of my life which i will never get back, I hit the close button and went somewhere else and watched Atomic Blonde.

I hope someone finds this review helpful.

C.R.Reviewed in the United States on February 5, 2016
5.0 out of 5 stars
I love anything with Channing Tatum
Verified purchase
I love anything with Channing Tatum, I picked the moving because of him, however once you get into it it does become eye opening and sad. Reality is life is sad, events are sad, and we fight for what we believe in and stand for, as someone who does not live to far from Seattle it was somewhat educational as well. If I had not watched it so late at night it might have inspired me to research the issue at hand. Still good to watch though.
2 people found this helpful

Annie Van AukenReviewed in the United States on May 3, 2011
5.0 out of 5 stars
"The people I'm really trying to fight are the ones who destroy so much, and they hurt so many lives... Literally, millions"
Verified purchase
In Stuart Townsend's fascinating true story of BATTLE IN SEATTLE, acts of vandalism and a violent, wide-reaching police response to them destroy an intended "peaceful" demonstration against the World Trade Organization's summit talks. However, the protestors' planned shutting down of certain streets to choke the conference into failure is just another form of anarchy. Cops continue to bash heads and amidst total chaos, hundreds are arrested.

The upshot of this four days of craziness is all subsequent WTO meetings have better security and demonstrators can't get near the events or disrupt traffic.

LLReviewed in the United States on January 25, 2017
4.0 out of 5 stars
A good picture about protest, in a time of protest!
Verified purchase
I enjoyed it alot. Stuart Townsend did an excellent job for a first time director. Great assumable cast, great story in leui of true events with the World Trade Organization.

I look forward to seeing what Townsend directs next, should he choose to direct again.
3 people found this helpful

CoyoteReviewed in the United States on September 23, 2020
5.0 out of 5 stars
Happy with purchase.
Verified purchase
Arrived on time and in great condition
DVD played very well. Thanks.

Sheila Reviewed in the United States on November 24, 2020
5.0 out of 5 stars
Eye Opening
Verified purchase
the Scary thing is , all i could see was tRump , not the world i want my Grandchild to inherit ! Great Work Stuart !

JKReviewed in the United States on January 31, 2017
4.0 out of 5 stars
This movie is good representation of life
Verified purchase
This movie is good representation of life. It teaches freedom as a sensation within. Those who remembered it and kept it are lucky. It's hard to have a clear perception of who we are, when each group sees itself in a different light and scope of things happening around them and within them.
5 people found this helpful
See all reviews
Back to top
Get to Know Us
Make Money with Us
Amazon Payment Products
Let Us Help You
EnglishChoose a language for shopping. United StatesChoose a country/region for shopping.
© 1996-2021, Amazon.com, Inc. or its affiliates