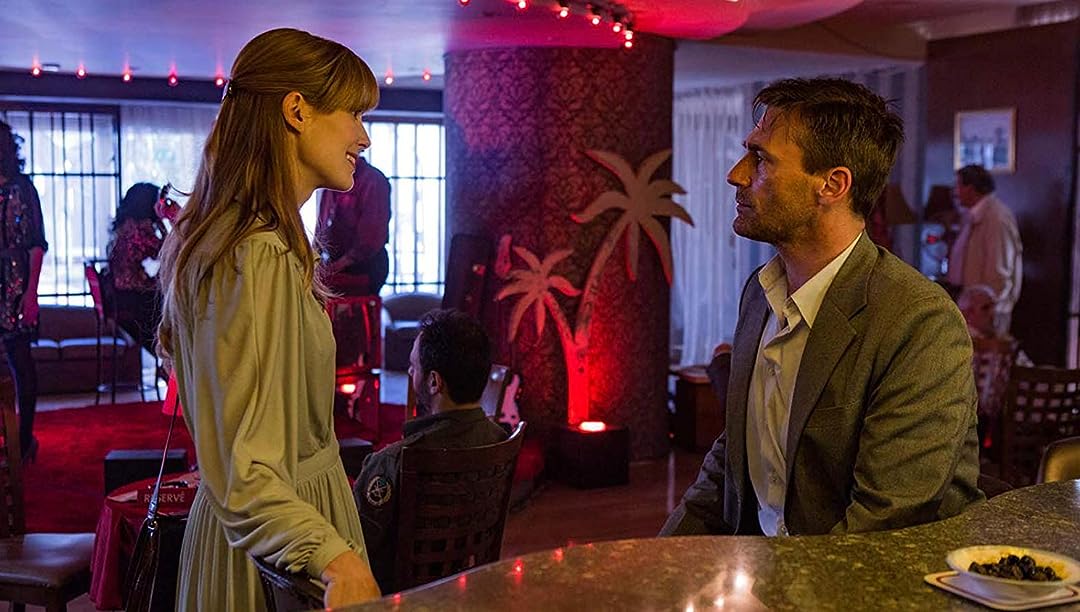 (791)
6.41 h 49 min2018X-RayR
Caught in the crossfires of civil war, CIA operatives must send a former U.S. diplomat (Jon Hamm) to Beirut to negotiate for the life of a friend he left behind.

UrennaReviewed in the United States on September 8, 2018
5.0 out of 5 stars
Stellar Performances by All
Verified purchase
John Hamm performed a skillful portrayal as Jason Skiles, the once consummate State Department employee in Beirut in 1972. A decade later, he’s a tanked-up, self-employed union mediator in the States.

In 1982, the U.S. government asked Skiles to return to Beirut; he refused. The cause and effect of Skiles’ life being altered occurred there. The suspension of his friendship with the Cal Riley’s portrayed by Mark Pellegrino, and wife, Alice, portrayed by Kate Fleetwood occurred there. Yet when told his friend, Cal, has been abducted, he returned.

Skiles did not receive a warm welcome in Beirut by those in charge. He was unwanted, although considered an excellent mediator. Foremost seemed to be Skiles’s alcoholism, but in actuality, some government officials covertly uncared if Cal Riley returned. Those officials are expertly portrayed by Dean Norris as the deceptive Gaines. Norris’s expertly applied makeup had me guessing until I looked at the actors in this movie, and Shea Whigham as the irritated Ruzak

Rosamund Pike is outstanding as the cool, unpretentious, Sandy Crowder, the multilingual, State Department employee who eventually contrives with Skiles and, with good reason.

The grown up Karim, portrayed by Idir Chender was also exceptional. In fact, the entire cast were superb. Great movie!

HMS WarspiteReviewed in the United States on August 26, 2018
5.0 out of 5 stars
The negotiator...
Verified purchase
This movie probably didn't get the attention it deserved when it was in the theaters. The situation in Lebanon was and is a mess, and very few people now living can have pleasant memories of it. But once, it was known as the Paris of the Middle East...

Mason Skiles is a U.S. diplomat working in Beirut before it all fell apart. An incident at his home leads to tragedy. Ten years later, Skiles is an alcoholic, working as a commercial negotiator and living with his memories of Lebanon. Out of the blue, his old life reaches out for him. A friend has been kidnapped in Lebanon, and Mason Skiles may be the only person who can get him back.

The movie does take a while to get going Telling the sides apart does take a program and some prior knowledge of recent Middle Eastern history. But once the story gets going, it is a tense thriller with a lot going on. Jon Hamm is terrific as Mason Skiles. Rosamund Pike is surprisingly good as his CIA minder. A very decent cast fills out the storyline, and you'll love the '70's and '80's fashions. Well recommended as an entertaining thriller.
35 people found this helpful

MBA, SETReviewed in the United States on September 17, 2018
4.0 out of 5 stars
Career Ambition in Seconds Makes Best Friend a Drunk, His "Adopted Son" a Terrorist
Verified purchase
Others praising this movie are overall accurate. Much more layered and intriguing than the Tom Cruise August 2018 Mission Impossible. This sticks with you. Can haunt you. Make you ask questions. Are there really any good or bad nation or group, cause? Or only good or bad people, with that characterization depending on a particular moment, in any one hour, during a lifetime?

The compulsion for professional and political and military power, anywhere, anytime throughout time, is a destructive psychopathology replicated in behaviors of characters in this movie. A similitude of the consequences of that behavior is the view from above, of what once was the thriving, beautiful city of Beirut. It had been one of the most religiously, culturally and economically diverse cities in the Middle East. But since the "civil war" (1975-1990) largely instigated and funded by outsiders seeking power and control there, the city has violently divided into East Beirut (almost exclusively Christian) and West Beirut (predominantly Muslim), as well as into a number of further subdivisions. Like the man seeking professional advancement regardless of the ethics of his behaviors, in a minute turning his friend into a drunk and the 13 year old loving boy and scholar he and his wife were sponsoring, into a terrorist, the sum of a multitude of similar selfish behaviors by others transformed beautiful Beirut into a bombed out incubator of hatred and vengeance.
20 people found this helpful

MBReviewed in the United States on July 4, 2018
5.0 out of 5 stars
Yes to a great political thriller
Verified purchase
Loved this movie. Well acted (Jon Hamm redeems himself), beautifully shot, and politically savvy.
27 people found this helpful

As far as the acting I think that John Hamm and Rosamund Pike did a great job.
44 people found this helpful

IntoMoYouKnowReviewed in the United States on August 27, 2020
4.0 out of 5 stars
Jon Hamm, movie star
Verified purchase
It's very strange watching someone as handsome as Jon Hamm in so many comedies. It's like he really doesn't want you to think he is sexy or a leading man. Maybe because he's too good at it in Mad Men, he wants to do everything but that kind of role. And even when he's in other dramas, he's never really as good in those.

But this one gave me hope he might finally translate that easy charm of Don Draper into something on the big screen. He plays a burned out negotiator who returns to Beirut after experiencing a terrorist attack years earlier. The CIA asks him to help negotiate a deal with former associate after a kidnapping involving a kid he used to know. Hamm is so good in this role, you'd be right to think he'd be great in the CIA. He brings the right amount of seriousness to the role, really stealing the show in so many scenes, even though the other performances are quite good as well. I've watched this twice before, and I can see myself giving it a spin again sometime down the road. Highly recommended!
One person found this helpful

Maui DougReviewed in the United States on October 12, 2019
5.0 out of 5 stars
Deserves at least a 4.5/6! Realistic Action/Espionage!
Verified purchase
After a pleasant, party banter intro, the lead character Mason Skyler's (Jon Hamm) wife dies in his arms at a party for Embassy and High CIA staff during a Muslim assault. After a career as a private sector negotiator in small ponds, he's recalled to active service to negotiate the release of an American hostage, his former good friend, a CIA field agent. The Beirut he returns to is totally unlike the one he'd left a decade earlier. Now an urban warfare zone with many warring factions, each jockeying for power and position, the gritty sets and videography reflects the realities of of the decay and desolation of war, much like many American urban inner cities today.

The action scenes were realistic, conservative and very believable unlike standard Hollywood, which probably accounts for the deluded audience given a larger than normal number of 1 star to a superb espionage drama. Trained, or inculcated, on unrealistic fist fights and fire fights by an ever pandering movie industry, each film outdoing the next in spectacular stunts and bellowing, manipulative sound tracks, this movie will not appeal to those addicted to stupendous stunts or romantic endings. Its message is clear, war, conflict, espionage are all Hell and outcomes are tenuous at best and even "our side" is corrupt to the core. Jon Hamm is one Hell of an actor. As is Ms Pike.

Julian KennedyReviewed in the United States on October 16, 2018
4.0 out of 5 stars
Handsome production with slightly underwhelming narrative.
Verified purchase
Beirut: 7 out of 10: A washed-up professional negotiator (John Hamm) returns to Beirut to rescue a former friend whom he blames for the destruction of his family.

The Good: Well they certainly captured the look and feel of early eighties Beirut. This is a ridiculously handsome production with nary a misstep in production design. The film decorates Tangier with enough extras and burnt out tanks to give the perfect representation. A true spectacle.

Everyone is solid to good in his or her roles. John Hamm does a fine job considering the issues with his character (see below) and Rosamund Pike shows once again why serious filmmakers put her in their movies.

The overall plot of forgiveness and closure with the past is well thought out. For the first half of the movie, this is a very tight drama told in a very convincing manner.

The Bad: Tony Gilroy’s script gives a great opening and floor show but simply cannot stick the landing. The latter third of the film simply seems rushed. Where character development should be paying off and emotions taking the foreground we have deus ex machina piling upon deus ex machina. Last minute revelations undermine the carefully crafted plot while characters pull the negotiation version of a superweapon from thin air to fill obvious plot holes. The movie wants a happy ending the story (and location) certainly does not deserve.

In addition, we have the problem with John Hamm’s character. We are told he is a self-destructive alcoholic and an expert negotiator. We are told this over and over again. We are not really shown this, however. While Hamm’s character is certainly gregarious, at no time in the movie does he seem to do a good job negotiating. In fact, considering the cards he is holding, by any honest measurement he is pretty awful at his job

Even stranger Gilroy’s script plays that old convention drunk guy sobers up for the big task. He has set back and oh no he is going for the bottle again. Watch the audience shriek in horror as they yell at the screen “No don’t do it” as he pours another whiskey. In reality, self-destructive alcoholics are not triggered to drink when things go badly. They are triggered to drink when things go well. The whole will he drink thing seems more hamfisted audience manipulation than actual actions by the character.

The Ugly: The film ends with a completely unnecessary credits clip about the actual US involvement in Beirut in the early eighties. In a few minutes, the clips manage to downplay a real tragedy (The marine barracks bombing in 1983 that killed 241 U.S. and 58 French peacekeepers), skip the incident the movie is obviously based on (The kidnapping and murder of CIA station chief William Francis Buckley in 1985), and generally undercut the artistry that came before it as well as insult the audience watching.

In Conclusion: Despite the ending, as well as some issues with the focus on plot over character, I enjoyed this movie. I cannot overemphasize how handsome a production this is. The film really manages to take you a different time and place. As a setting early eighties Beirut is a fantastic one. There is a great fall of civilization/ Mad Max vibe that permeates every scene. The film does a nice job during quiet moments to capture the horrible destruction and the human nature of those still occupying the city going about their daily lives. There are wonderful stories that can be told in such chaos. This story was just a little less wonderful than it needed to be.
One person found this helpful
See all reviews
Back to top
Get to Know Us
Make Money with Us
Amazon Payment Products
Let Us Help You
EnglishChoose a language for shopping. United StatesChoose a country/region for shopping.
© 1996-2022, Amazon.com, Inc. or its affiliates