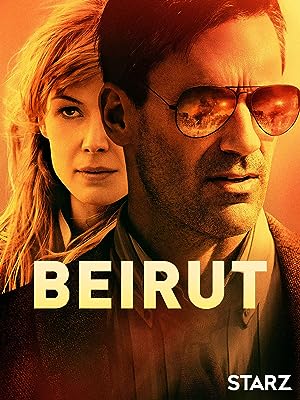 (748)
6.51 h 49 min2018R
In 1980s Beirut, Mason Skiles is a former U.S. diplomat who returns to service to save a colleague from the group that is possibly responsible for his own family's death.

UrennaReviewed in the United States on September 8, 2018
5.0 out of 5 stars
Stellar Performances by All
Verified purchase
John Hamm performed a skillful portrayal as Jason Skiles, the once consummate State Department employee in Beirut in 1972. A decade later, he’s a tanked-up, self-employed union mediator in the States.

In 1982, the U.S. government asked Skiles to return to Beirut; he refused. The cause and effect of Skiles’ life being altered occurred there. The suspension of his friendship with the Cal Riley’s portrayed by Mark Pellegrino, and wife, Alice, portrayed by Kate Fleetwood occurred there. Yet when told his friend, Cal, has been abducted, he returned.

Skiles did not receive a warm welcome in Beirut by those in charge. He was unwanted, although considered an excellent mediator. Foremost seemed to be Skiles’s alcoholism, but in actuality, some government officials covertly uncared if Cal Riley returned. Those officials are expertly portrayed by Dean Norris as the deceptive Gaines. Norris’s expertly applied makeup had me guessing until I looked at the actors in this movie, and Shea Whigham as the irritated Ruzak

Rosamund Pike is outstanding as the cool, unpretentious, Sandy Crowder, the multilingual, State Department employee who eventually contrives with Skiles and, with good reason.

The grown up Karim, portrayed by Idir Chender was also exceptional. In fact, the entire cast were superb. Great movie!

HMS WarspiteReviewed in the United States on August 26, 2018
5.0 out of 5 stars
The negotiator...
Verified purchase
This movie probably didn't get the attention it deserved when it was in the theaters. The situation in Lebanon was and is a mess, and very few people now living can have pleasant memories of it. But once, it was known as the Paris of the Middle East...

Mason Skiles is a U.S. diplomat working in Beirut before it all fell apart. An incident at his home leads to tragedy. Ten years later, Skiles is an alcoholic, working as a commercial negotiator and living with his memories of Lebanon. Out of the blue, his old life reaches out for him. A friend has been kidnapped in Lebanon, and Mason Skiles may be the only person who can get him back.

The movie does take a while to get going Telling the sides apart does take a program and some prior knowledge of recent Middle Eastern history. But once the story gets going, it is a tense thriller with a lot going on. Jon Hamm is terrific as Mason Skiles. Rosamund Pike is surprisingly good as his CIA minder. A very decent cast fills out the storyline, and you'll love the '70's and '80's fashions. Well recommended as an entertaining thriller.
36 people found this helpful

MBA, SETReviewed in the United States on September 17, 2018
4.0 out of 5 stars
Career Ambition in Seconds Makes Best Friend a Drunk, His "Adopted Son" a Terrorist
Verified purchase
Others praising this movie are overall accurate. Much more layered and intriguing than the Tom Cruise August 2018 Mission Impossible. This sticks with you. Can haunt you. Make you ask questions. Are there really any good or bad nation or group, cause? Or only good or bad people, with that characterization depending on a particular moment, in any one hour, during a lifetime?

The compulsion for professional and political and military power, anywhere, anytime throughout time, is a destructive psychopathology replicated in behaviors of characters in this movie. A similitude of the consequences of that behavior is the view from above, of what once was the thriving, beautiful city of Beirut. It had been one of the most religiously, culturally and economically diverse cities in the Middle East. But since the "civil war" (1975-1990) largely instigated and funded by outsiders seeking power and control there, the city has violently divided into East Beirut (almost exclusively Christian) and West Beirut (predominantly Muslim), as well as into a number of further subdivisions. Like the man seeking professional advancement regardless of the ethics of his behaviors, in a minute turning his friend into a drunk and the 13 year old loving boy and scholar he and his wife were sponsoring, into a terrorist, the sum of a multitude of similar selfish behaviors by others transformed beautiful Beirut into a bombed out incubator of hatred and vengeance.
21 people found this helpful

MBReviewed in the United States on July 4, 2018
5.0 out of 5 stars
Yes to a great political thriller
Verified purchase
Loved this movie. Well acted (Jon Hamm redeems himself), beautifully shot, and politically savvy.
27 people found this helpful

As far as the acting I think that John Hamm and Rosamund Pike did a great job.
44 people found this helpful

IntoMoYouKnowReviewed in the United States on August 27, 2020
4.0 out of 5 stars
Jon Hamm, movie star
Verified purchase
It's very strange watching someone as handsome as Jon Hamm in so many comedies. It's like he really doesn't want you to think he is sexy or a leading man. Maybe because he's too good at it in Mad Men, he wants to do everything but that kind of role. And even when he's in other dramas, he's never really as good in those.

But this one gave me hope he might finally translate that easy charm of Don Draper into something on the big screen. He plays a burned out negotiator who returns to Beirut after experiencing a terrorist attack years earlier. The CIA asks him to help negotiate a deal with former associate after a kidnapping involving a kid he used to know. Hamm is so good in this role, you'd be right to think he'd be great in the CIA. He brings the right amount of seriousness to the role, really stealing the show in so many scenes, even though the other performances are quite good as well. I've watched this twice before, and I can see myself giving it a spin again sometime down the road. Highly recommended!
One person found this helpful

Okemos56Reviewed in the United States on October 2, 2018
5.0 out of 5 stars
Not perfect but very good
Verified purchase
I found this a very entertaining thriller about a failed diplomat who finds redemption where he failed. Mason Skiles lived in Beirut with his Arabic wife when the place was still at peace. His wife is killed and leaves for the USA where he becomes a drunkard reaching the end of his line. He's called back to negotiate another deal in Beirut. The lead is strong as is the supporting cast. For some reason, Rosamund Pike is occasionally able to show emotions through facial expressions in this movie. It makes her a credible actress.

The movie is not perfect. The plot line is not very original. Early key elements are easily guessed for those who want to do so. The later ones less so. Some find the opening scenes very slow. I did not. This was old style movie making that allows for slower development of the plot. Some find the lines clunky. Some, mainly the ones involving negotiations, were, but I've heard worse lines in many other movies. For others, they reject the particular political point of view in the movie. That's fair, but it's not an outlandish pov. I didn't like the dues ex machina in the ending, at least on first blush. There are questions of how. There are questions of whether the negotiator set it up. I suppose that's what the movie wants us to think, but it still seems far fetched to me, even in a movie that is necessarily far fetched at points. I would give it 4.5 stars because of that, but I enjoyed it before that so I rounded up.
One person found this helpful

Maui DougReviewed in the United States on October 12, 2019
5.0 out of 5 stars
Deserves at least a 4.5/6! Realistic Action/Espionage!
Verified purchase
After a pleasant, party banter intro, the lead character Mason Skyler's (Jon Hamm) wife dies in his arms at a party for Embassy and High CIA staff during a Muslim assault. After a career as a private sector negotiator in small ponds, he's recalled to active service to negotiate the release of an American hostage, his former good friend, a CIA field agent. The Beirut he returns to is totally unlike the one he'd left a decade earlier. Now an urban warfare zone with many warring factions, each jockeying for power and position, the gritty sets and videography reflects the realities of of the decay and desolation of war, much like many American urban inner cities today.

The action scenes were realistic, conservative and very believable unlike standard Hollywood, which probably accounts for the deluded audience given a larger than normal number of 1 star to a superb espionage drama. Trained, or inculcated, on unrealistic fist fights and fire fights by an ever pandering movie industry, each film outdoing the next in spectacular stunts and bellowing, manipulative sound tracks, this movie will not appeal to those addicted to stupendous stunts or romantic endings. Its message is clear, war, conflict, espionage are all Hell and outcomes are tenuous at best and even "our side" is corrupt to the core. Jon Hamm is one Hell of an actor. As is Ms Pike.
See all reviews
Back to top
Get to Know Us
Make Money with Us
Amazon Payment Products
Let Us Help You
EnglishChoose a language for shopping. United StatesChoose a country/region for shopping.
© 1996-2021, Amazon.com, Inc. or its affiliates