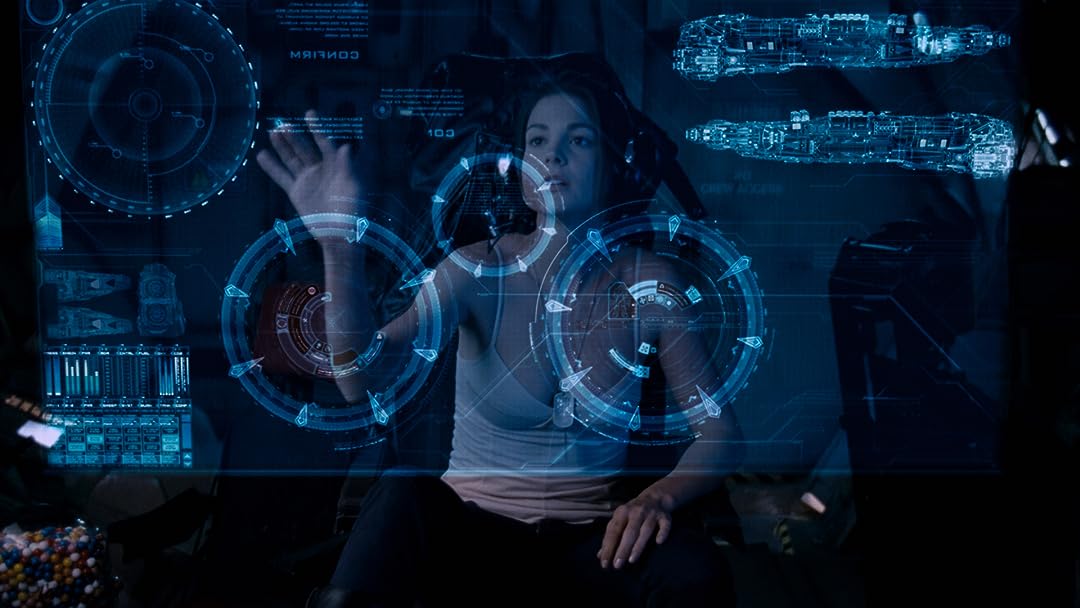 (690)
4.51 h 33 min2018X-Ray16+
When a deep space fishing vessel is robbed by a gang of pirates, the Captain makes a daring decision to go after a rare and nearly extinct species. His obsession propels them further into space as the crew spins toward mutiny and betrayal.

CTBReviewed in the United States on December 17, 2018
2.0 out of 5 stars
A lot of promise, but....
Verified purchase
The overall concept here is great *a Space version of Moby Dick). The casting was fairly decent and the effects were top notch. The Problem???

GOOD LORD....there ends up being like 20 Story lines, non of which are completed. The 1st half of the Movie seems to be following a good path and then everything splits up into a crazy amount side stories that have little to do with....with....with really anything!?

You've got the 'Moby Dick' theme and then
- Dying Space Cop (why she's there never makes sense) - who want to go into 'White Space' for no clear reason
- The Captain who starts off by purchasing a Deep Space map (to avenge father)
- Parasites that infest the Ships Engineer, making him a crazed killer that eventually is killed by a Sword of some kind that is, randomly, given to Space Cop by the Captain
- A Mutiny (of 2)
- Space Pirates
- Random 'Alien' creatures that attack the ship
- A pregnant Chef
- A 2 Brothers that never understood each other story offshoot
- 'White Space' that is explained as a Black Hole exit in about 30 seconds by Space Cop

I could go on and on...this movie had potential, but the Director(s) could never decide what this movie was about. They then ran out of Time and/or Money and then just slapped it all together with everyone dead accept Space Cop (and no...I'm not calling that a **Spoiler** because there is nothing 'Spoil'.

Anyway...as the Plots kept adding up, I found myself looking at the 'Time Left' in the Movie and wondering, "How in the hell are they gonna wrap this all up?????". Well...the answer, unfortunately, is that they don't.

C. BiscuitReviewed in the United States on January 11, 2019
1.0 out of 5 stars
The Absolute State of Hollywood Re-Boot's
Verified purchase
The idea isn't a horrible one: Remake Moby Dick so that instead of an 1800's whaling ship chasing a whale, its astronauts chasing a space-dragon. Unfortunately this movie has every Hollywood-Approved PC formula out there.
-The Clever Chinese Gangster (with sexy sidekick) who's always a step ahead.
-The hard-boiled Captain, complete with edgy backstory.
-The Nerdy Guy, who of course gets smoked.
-The Grizzled Old Guy, complete with drinking problem and skill at poker
-The Cool Black Guy who knows whats up.
...and of course every woman in this story, y'know, cook, pilot, law enforcement type, they're all centerfold-caliber 20-something's with a penchant for tank-tops and hooking up with Cool Black Guy.
Add to all of that, the movie doesn't resolve anything, it just kinda ends. This is so formulaic and bad, it would almost be better to just sit in a dark room and punch yourself.
69 people found this helpful

Brother PunchReviewed in the United States on December 20, 2021
1.0 out of 5 stars
Bad.
Verified purchase
Beyond White Space: The acting isn't particularly bad. The CGI isn't terrible. The general concept, though, and the concepts conveyed, indicate a fundamental divorce from storytelling. It's like an investor took over directing. Scenes don't make sense. The entire opening sequence doesn't make sense. White space in space where giant whales swim. Through space. Breathing? Space? But oh no the whales can counter-attack, which appears to take our heroes completely by surprise, even though the premise is revenge for a prior killing. Perhaps they lost a family member to hunting these things before and thought, "Hey, I'll go shoot this thing's girlfriend in the neck, that will end well" then that idiot doesn't even make it to escape pod before a justifiably irate space whale tore his ship apart as if it were made of legos. Really, looked like legos but not because of CGI limits just no one in the creative loop could be bothered to create a believable ship being believably destroyed for unbelievably stupid reasons. If anyone had bothered to watch the film more than five minutes they'd be able to tell you whatever passes for reasoning in this film's choices but they wouldn't make sense either. This film does not deserve 3.5 stars.
21 people found this helpful

ShootingInTheDarkReviewed in the United States on January 1, 2022
4.0 out of 5 stars
The Bad Reviews Are Amusing but It's SCIENCE FICTION - Don't Take it So Seriously
Verified purchase
Seriously it's a sci fi film and you have to let your imagination (you know that thing you used to use when you were a kid) run a little wild here. We don't know what the state of humanity will be in blah blah blah years. We don't know if we will survive as a species and we don't know what criminal elements will be like in the future or society for that matter. Take "fishing" as a term used loosely to describe what they're doing. Those aren't space whales, but they spew ambergris. You catch fish with bait and that's exactly what they do. So what if it's a cargo container and they're using "space rocks" It's fiction. Don't question all of the details.

For the one who said, "Why does the spaceship have headlights?" The Millenium Falcon has headlights, the Enterprise has headlights. Airplanes have headlights. How else do you see when there's an absence of light? Wait wait! I know!!! Headlights!!! Candles won't work and oh damn I left my magic wand in the space port so I can't just say Lumos.

I liked the idea of a space Moby Dick. This could have developed a little better but it didn't suck. There were some funny moments in this. Tongue in cheek dark humor moments, but they were there. Yes it is full of cliches and token characters and borrowed concepts from other films, I don't care. It was entertaining. Lighten the hell up folks. It's fiction.

*****SPOILER ALERT******
Those who panned the movie and complained about how that one person survives because of getting into the cryo chamber, take a good listen to the results of the scan from the deep space explorer. Someone or something else survived the trip.
10 people found this helpful

PeterReviewed in the United States on February 16, 2021
1.0 out of 5 stars
"deep space fishing"??
Verified purchase
Look, I'm all for suspending judgment for fiction, but "deep space fishing"?? I mean I even suspended disbelief, gave them the benefit of the doubt... maybe they go into deep space and hunt on foreign worlds? Maybe they scavenge asteroids?? No. They actually mean deep space fishing. I started watching this and in the first minute there are two dinosaurs swimming in space and screaming and people are shooting at them with spaceships. You have to have some regard for the laws of physics. This movie is so fundamentally illogical that I believe showing it is performing a disservice to human scientific advancement. The person who made this movie should be slapped in the face. Not okay.
21 people found this helpful

Gun4hireReviewed in the United States on December 21, 2021
2.0 out of 5 stars
It's Moby-dick in OUTER SPAAAAAAAAACE!
Verified purchase
A fairly loose retelling of the old classic, and proof of why the original is a classic and subsequent retelling are forgotten about.

The movie has its issues, some hectic editing and busy plot. This is supposed to be Moby-dick in space, which is not a bad idea and opens the door into some interesting possible reinterpretations. The movie fails at this because of its lack of focus, at times it feels like in the movie the captain has no real motivations. The obsession, the need for vengeance, I just did not feel it. Yeah, they gave the characters their own sob story as a motivator, but none of them seemed all that motivated. Not until the ending than, it's like, "oh yeah I have this thing I care about".

A major aspect they totally dropped the ball was in Moby-dick how the captain's obsession infected his crew to that one single driving force, kill Moby-dick! Here we have just a bunch of dysfunctional idiots bouncing around inside a spaceship.

The actors were not able to give much depth to their characters. Captain and brother very 2D, space cop she was the typical 1D strong female protagonist/antagonist, everyone else was as shallow as a sidewalk rain puddle.
[This right here is why most current day remakes don't do well. It is because those remaking them do not understand what made the original so great and why people loved them.]

The movie's effects were good enough, and the acting and direction was serviceable enough to tell the story. I was able to get to the end with hating it for wasting my time, it was reasonably entertaining for a movie included with prime, so catch if you have time to kill and want something sifi.

ClarenceReviewed in the United States on March 18, 2021
1.0 out of 5 stars
2 Hours of my Life Wasted
Verified purchase
SPOILER ALERT! As a Sci-Fi nut I tried to give this movie every chance but even in the end when it had one last chance to redeem itself, it took a turn towards the stupid. Surviving with the cryo was workable, but not by her. The story jerked along from the second scene to the end. I was given plenty reason to dislike all of the characters except 2 both of whom were ultimately betrayed. What turned out to be the main two characters were the two I was rooting against the most. It was completely dissatisfying how their stories evolved. The one cryo scene at the end was ok, but it involved one of the 2 characters I disliked the most. There was no hero. Not that I required one, but the story could have really used one. Instead it was a filled with backstabbing idiots who all lied and blundered along from one scene to the other the the very anti-climactic end. Wait... I take that back. There was a hero. The dragon. I just wish I could have taken him out of this debacle and placed into a decent sci-fi movie.
9 people found this helpful

Chris LReviewed in the United States on January 12, 2019
1.0 out of 5 stars
A mish mash of ideas that don't make a coherent movie
Verified purchase
This movie tries very hard to be many things and misses on all of them. The city scenes are desperately trying to be Blade Runner. The interior spaceship scenes are trying to be Alien. The spacesuit heads up displays are trying to be Iron Man. The pirates are trying to be Reavers from Firefly.
The acting is trying to be good.
The CGI is OK but not brilliant and for the love of Sci fi why is there so much sound in their version of space? And why does the main ship have headlights?
I wanted to like this film but I just couldn't get into it. There was too much going on that pulled me out of the moment. I couldn't get over how hard it was trying to be so many things without achieving any of them.
12 people found this helpful
See all reviews
Back to top
Get to Know Us
Make Money with Us
Amazon Payment Products
Let Us Help You
EnglishChoose a language for shopping. United StatesChoose a country/region for shopping.
© 1996-2022, Amazon.com, Inc. or its affiliates