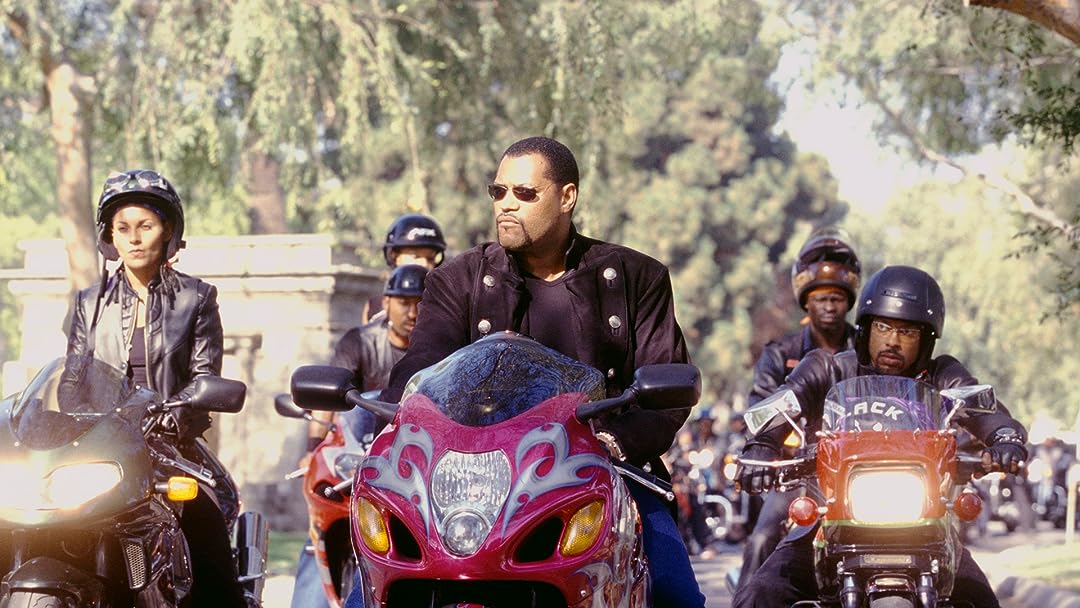 (1,962)
1 h 50 min2003X-RayPG-13
Laurence Fishburne [The Matrix] is Smoke, the "King of Cali" - the undefeated and undisputed racing champion. His dominance and title are challenged by Kid [Derek Luke, Antwone Fisher], a fierce young racing prodigy, in this electrifying story of modern-day daredevils in the ultimate race to win the survival of the fastest.

Jay P.Reviewed in the United States on April 7, 2022
3.0 out of 5 stars
not terrible, but too much about the characters
Verified purchase
For most people, movies that focus on the characters is a good thing. But in this case, it was too much about the characters and not enough about the bikes and not enough actual biking action except for the occasional stunt. Because of this, the movie didn't do better than lukewarm with audiences and critics alike since it wasn't at all special, was highly formulaic, and it did even worse with actual motorcycle enthusiasts. Hell, most RL bikers seem to talk about "Wild Hogs" far more than "Biker Boyz".

For the TFATF series, they hit gold because they also focused on the cars and the engines, mentioning several actual models and even mentioning the 2JZ engine by name which 95% of the audience probably had no clue what it actually was but were still able to figure out that it was special somehow. In this movie, if they mentioned even a single bike make or model by name, I can't even remember it. And the action in TFATF was legit, if stereotypically overblown in Hollywood fashion but at LOOKED great, while BB's action was just a few seconds of stunt riding, choreographed kickstand dropping, and a, "Look at this cheesy vision tunnel get looonger!" Very weak. If you didn't care much for the characters, then you didn't care much for the movie as a whole.

potooleReviewed in the United States on July 9, 2019
5.0 out of 5 stars
What Fast & Furious coppied
Verified purchase
I LOVED this movie. Super fun, engaging, great acting, exciting, with depth. This is the movie that the Fast and Furious creators watched, and then copied with cars instead of motorcycles. Laurence Fishburn was amazing as always. I will watch this movie over and over again.
4 people found this helpful

chris hansfordReviewed in the United States on February 11, 2022
5.0 out of 5 stars
Great movie
Verified purchase
Love this movie if your into street bikes and racing this is the movie for you. Watched this movie for the first time when it was on VHS. Hunted it for years on DVD finally found it.

DIMPLESReviewed in the United States on August 22, 2019
5.0 out of 5 stars
Loved it
Verified purchase
Loved this movie. Adding to my movie collection. I'm very big on having family movie night. We loved this movie. Thank you for adding happiness to my families movie night. Will be purchasing more from the company.
One person found this helpful

Ric RogersReviewed in the United States on June 25, 2019
1.0 out of 5 stars
Dreamworks? Really?
Verified purchase
I can't believe spielberg had anything to do with this silly, shallow nonsense of a film. and Lawrence? what in the world is he wasting his time and talent on this trash?
3 people found this helpful

Flynn FlanneryReviewed in the United States on November 12, 2020
1.0 out of 5 stars
Not good
Verified purchase
I was hoping to see some good mc racing, instead it was more about gangsta homies in the hood. I'd rather take out my hoe... and garden than waste my time looking at this.

MisterEaseReviewed in the United States on November 11, 2020
3.0 out of 5 stars
Bikers Have Feelings Too!
Verified purchase
This movie tries to be serious but comes off as corny. Think biker gangs done in a rom com style. It's ultimately about emotions and relationships, not speed and insanity.

Rose GardenReviewed in the United States on July 23, 2019
1.0 out of 5 stars
Definitely the Battlefield: Earth of racing movies.
Verified purchase
Definitely the Battlefield: Earth of racing movies.
3 people found this helpful
See all reviews
Back to top
Get to Know Us
Make Money with Us
Amazon Payment Products
Let Us Help You
EnglishChoose a language for shopping. United StatesChoose a country/region for shopping.
© 1996-2022, Amazon.com, Inc. or its affiliates