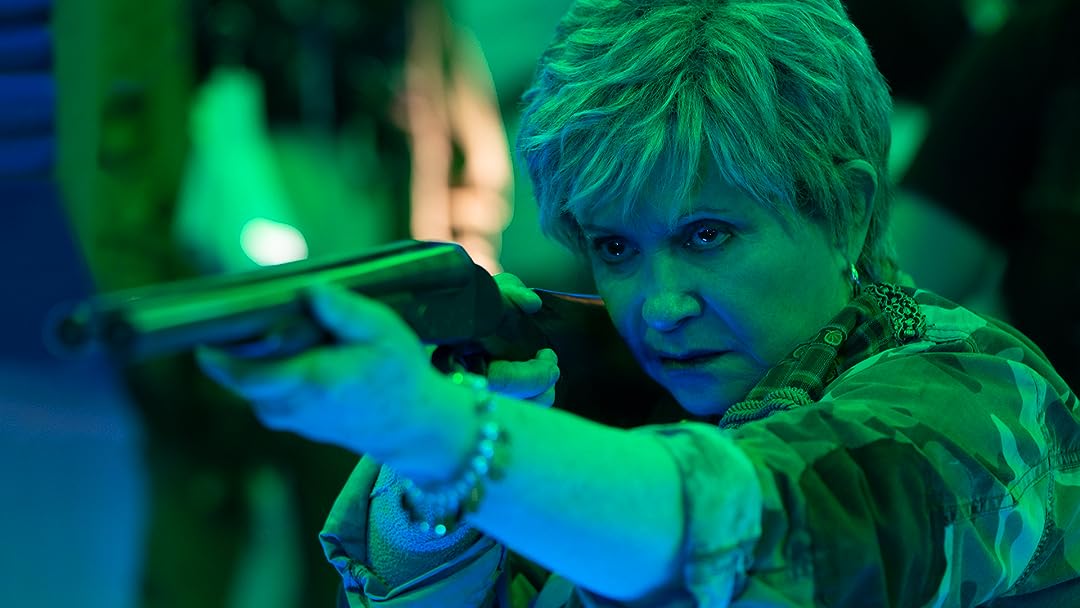 (299)4.31 h 25 min2021X-RayHDRUHD18+
A feisty senior citizen fights to protect her beloved neighborhood from an evil force that’s taken over the local bingo hall and is killing the residents in gruesome ways. Part of the Welcome to the Blumhouse collection.

Christopher M. SorrellReviewed in the United States on October 2, 2021
2.0 out of 5 stars
Two Stars for the two heroes...
Verified purchase
What a dreadful Spielberg wanna be movie. Yes, a dreadful Spielberg wanna be movie that fails miserably. The Spanish and Afro-American Grandmas were the most interesting characters. No, not that Mr. Big Bingo sardonic murderer one bit. Is that all he had that Joker smile? And, the absolute RACIST statement when the neighbours went into the Bingo Hall for the first time and said it's owned by a WHITE man, yes, a WHITE man. What in the hell were you thinking to let this piece of garbage be shown on Prime? Oh, and of course the black kid is a thief robbing cars, finding guns etc. Well, as to plot you can kiss your backsides goodbye. Hated it on principle...just goes to show actors can prostitute themselves for their craft, and work for horrid scripts and equally horrid direction. And, lastly, don't think I didn't get the Leftist Hollywood crap thrown in between the lines. Shame On You!!!
63 people found this helpful

JULIAReviewed in the United States on October 1, 2021
1.0 out of 5 stars
Racist
Verified purchase
Enough attacking the white people. The villains are white. The black lady keeps calling. The daughter in law a” pasty broad “. Turn the tables and see how a black person would like being called a “dark skinned broad”. There would be a riot. Sheesh.
77 people found this helpful

fatandhappyReviewed in the United States on October 2, 2021
1.0 out of 5 stars
garbage
Verified purchase
Looked good, until it wasn't. It was nice of them to denigrate white people, but it's hardly surprising to see that. Avoid.
63 people found this helpful

JenniferReviewed in the United States on October 1, 2021
5.0 out of 5 stars
Don't count out older folks!!
Verified purchase
Just a good happy, not to fast, but not too slow awesome flick. Money isn't everything is the message. I will watch again!
26 people found this helpful

Kindle CustomerReviewed in the United States on October 1, 2021
5.0 out of 5 stars
A hidden gem?
Verified purchase
Wow, simply stellar acting.
I was surprised to see only 3 reviews before I watched it. Glad I did.
The story if not original, is still more relevant than ever.

Caitlin, Renee,Meir & FrankReviewed in the United States on October 1, 2021
5.0 out of 5 stars
Oh boy do you want to play BINGO & win big
Verified purchase
OH boy
this truly is one insane movie but in a good entertaining way.
Bingo you think its for the old folks? Think again
These are not just any old folks trying to win
if you have ever really played a serious bingo game you will know some players are nuts
get a snack and a drink and get into this bingo hell it will entertain you not for the faint of heart
heh heh heh
18 people found this helpful

linda galellaReviewed in the United States on October 2, 2021
3.0 out of 5 stars
Geriatric horror? Leave it to Blumhouse to
Verified purchase
bust out this funky woke genre!

BINGO HELL is one crazy, wannabe fright film. Lupita, the lead Abuelita, is a force to be reckoned with. She and her posse of senior Community Watchers have been protecting their town for decades. It’s on its very last leg and is falling victim to gentrification only there’s something very rotten come to town.

Evil infiltrates thru the town Bingo game that was previously used to help floundering residents. Absolutely everyone in town can use help and the dollar signs plastered about by the new Bingo company have almost the entire town loosing their collective minds. Lupita stands strong and tries to keep her faithful besties on task with her to keep their town free from outsider influences.

The movie starts out ok except that it’s difficult to understand some of the dialogue. Lupita speaks Spanish and English, mixing them and flipping them together. I speak Spanish quite well but this was a Mexican dialect or bunch of colloquialisms that was hard to catch and the translations didn’t capture. This character was really good and I’m sure we missed some funny stuff. The other really good character was Dolores, a tough talking, hard loving grandma and Lupita’s best friend.

Totally over the top is the bad guy; his teeth made me nauseous. The special effects are weak - green goo, red light photography, smoke, flying blood and body parts and yeah, gross teeth. The more evil Mr. Big gets, the more he needs a really good dentist.

This is one of those “so bad it’s good” movies. Half the cast really does a good job with this B minus script but it’s just too cheesy for my liking, even tho’ the ferocious seniors were great🍿
19 people found this helpful
See all reviews
Back to top
Get to Know Us
Make Money with Us
Amazon Payment Products
Let Us Help You
EnglishChoose a language for shopping. United StatesChoose a country/region for shopping.
© 1996-2021, Amazon.com, Inc. or its affiliates