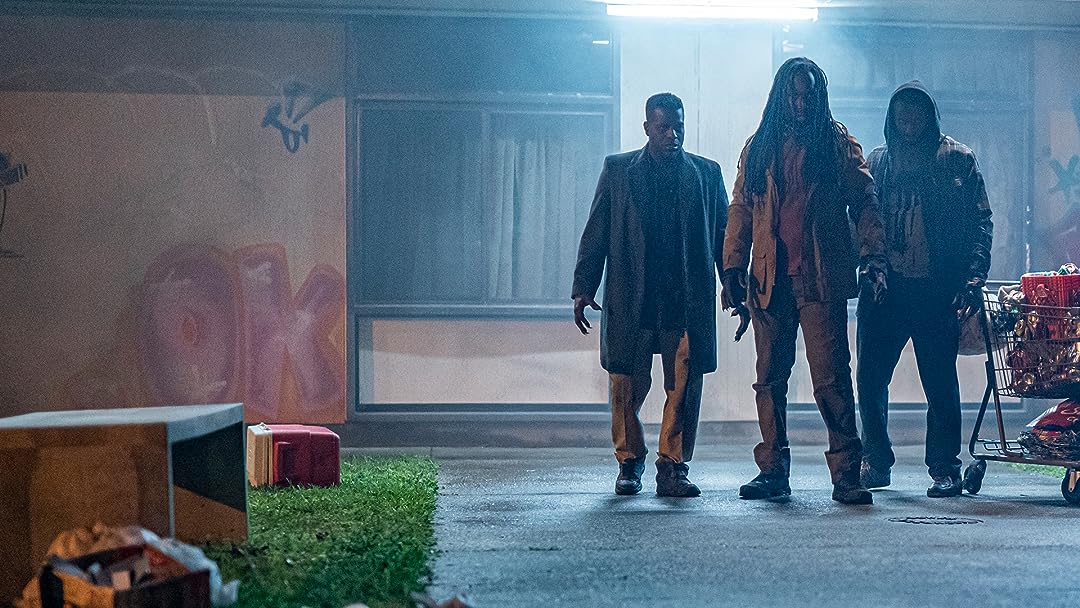 Melissa BReviewed in the United States on October 1, 2021
1.0 out of 5 stars
Colorist, Racial and Sterotypical
Verified purchase
Poorly written, with no clear plot, theme or message beside promoting colorism. I wanted to like it, but I watched it and it missed the mark completely. If colorism was brought into the movie to condemn, or expose it that might have been uplifting. When you make a beautiful dark skinned woman the punchline for a “dark skinned,” Wesley Snipes joke, it’s not funny. I wish I could Unwatch this horrible movie.
Why do black characters have to portray characters that are Thugs, drug addicts, low self esteem, poor and living in a urban area, even in horror movies. This is so unimaginative, it could have been a great movie.
55 people found this helpful

tharrison004Reviewed in the United States on October 1, 2021
3.0 out of 5 stars
Drugs as weapons against the people.
Verified purchase
Did you know the CIA bring in Drugs to the US as a way to control the population,they hit the Black community pretty hard,and anybody who is political,Musicians,Actors,Activists,College Students,and anybody who tried to warn the people of what was really going on in our Government,they attacked the Blank Panthers,MTKG,and Tupac,and so many other people,it didn't matter if you are black or white,they tried to get as many people addicted to drugs as possible so they couldn't raise up against the Government,their still doing it,that's why Trump went after the Drugs so hard,he knows what the CIA is doing to us. There's a great Doc called Drugs as weapons against us,i recommend people watch it,especially the Black community. Please learn your history,some of the people you vote for come from families who enslaved your ancestor's and are controlling you right now. It doesn't matter if your black or white,we've all been brain washed since birth,and we all kinda woke up a little in the past few years since Trump became president,whether you like him or not,it doesn't matter,we've all learned how the Media and social Media are manipulating us,as well as the Government.If you want to enrich your life,stay away from drugs,and educate yourselves,that's the best way to break away from the manipulation,and learn how Social media is manipulating you,stop putting your whole life story on Social Media,stop clicking on MSM News feeds,do your own research,don't look for that first easy answer because the one you get on Google is manipulating you. There's great Documentary's out there,learn what Google is doing,learn what our Government is doing to us,and maybe we can break the cycle of manipulation and drugs.PEACE
24 people found this helpful

Linda AnzaloneReviewed in the United States on October 2, 2021
3.0 out of 5 stars
Could have been a really good movie.
Verified purchase
This movie was well made and had good actors. It had the potential to be a very good movie. The problem with it started when the plot tried to pick up extra themes. It started out as a vampire movie where they got their prey by killing homeless because they wouldn't be missed. Made total sense. Somewhere along the line, they brought in politics, prejudices against black skin, and Hurricane Katrina. If they needed a filler...why not have a little romance? Anyway... the main character is a teenage girl who has a mother for a junky. Of course, she gets killed by the vampires and is turned into one. That puts her daughter on a determined course to kill all vampires...not caring who she gets killed in the process doing it. It's clear after she kills her first few vampires, she becomes a bit of an adrenaline junky herself. There is one thing that has always bothered me in all vampire and zombie movies. When someone gets killed and they are buried in sealed coffins seven feet deep in the ground, how do they get out of the coffin... Much less dig their way up through all of that dirt? Maybe I am being picky, but that's just how I see things.
20 people found this helpful

linda galellaReviewed in the United States on October 1, 2021
4.0 out of 5 stars
Old school style, teenage vampire horror flick that
Verified purchase
will have you screeching and squeezing your eyes shut!

BLACK AS NIGHT is full of typical vampire tropes that are done in a contemporary way. The New Orleans projects are a great setting for the story. It has a creepy factor that’s just on the edge of too much but tempered with a humorous, dusty POOF - watch the movie for details on that😉

Acting is decent by the teenagers but Keith David is great as the head of the evil, rogue vampire faction. He’s a LONG way from the pastor he played in Greenleaf! Music fits the movie and the photography is ok. There’s some stock footage of NOLA but most of its in and around the neighborhood where these kids live.

It’s a short action oriented film. Violence is 6.5 without being gratuitous. There are a few rogue expletives, 1 f-bomb and no real sexual content. There are some short, suggestive scenarios but that’s it. The 16+ rating is mostly about the vampire acts of violence. The ending has possibilities…🍿
18 people found this helpful

LJLeeReviewed in the United States on October 5, 2021
1.0 out of 5 stars
so much potential
Verified purchase
One of my heroes is Nelson Mandela. I once heard him speak about ubuntu and he described it as humanity and humility and caring for anyone and everyone regardless of who they were or where they had walked before. Some translate it as "I am because we are." How beautiful. I think it is great to have all colors, races, orientations etc. portrayed in lead roles-that is awesome. However, it should not be at the expense of those without so much melanin in their skin. One character states "melanin is a (expletive) super power." Another states they will try and survive being at a good school littered with white people. Because, you know, those white people. An ancient vampire states something about the darker the skin the more beautiful and royal (not it is beautiful, it is more/better). The token white person doesn't have what it takes and can't continue because, you know white people don't have what it takes. What? Reverse stereotype and racism to build up others is not helpful or productive. Please, go read Frederick Douglas, Martin Luther King Jr and skip this…
14 people found this helpful

TMReviewed in the United States on October 1, 2021
2.0 out of 5 stars
Started out meh...
Verified purchase
... standard-issue, yppoe suck wokeness, then it got stupid extra-stupid; for example, they assault an ally that could rip them in half for no good reason.
18 people found this helpful

Just JJReviewed in the United States on October 2, 2021
5.0 out of 5 stars
Good, Modern Vampire Flick
Verified purchase
I love Vampire movies, and so many are cheese fests. This one had good actors, script, special effects, make-up, and filming. None of the stereotypical NOLA faux Vampire garbage. Nice to see Amazon making decent movies, as so many "Indie" flicks look like a high school project gone wrong. I sincerely hope there will be a "Black As Night II"...
12 people found this helpful

TDTReviewed in the United States on October 1, 2021
5.0 out of 5 stars
Great vampire movie and great young actors!
Verified purchase
I loved it! The acting is very good. The script is fun and not too cliche for a vampire movie. I would have paid for this movie.
11 people found this helpful
See all reviews
Back to top
Get to Know Us
Make Money with Us
Amazon Payment Products
Let Us Help You
EnglishChoose a language for shopping. United StatesChoose a country/region for shopping.
© 1996-2021, Amazon.com, Inc. or its affiliates