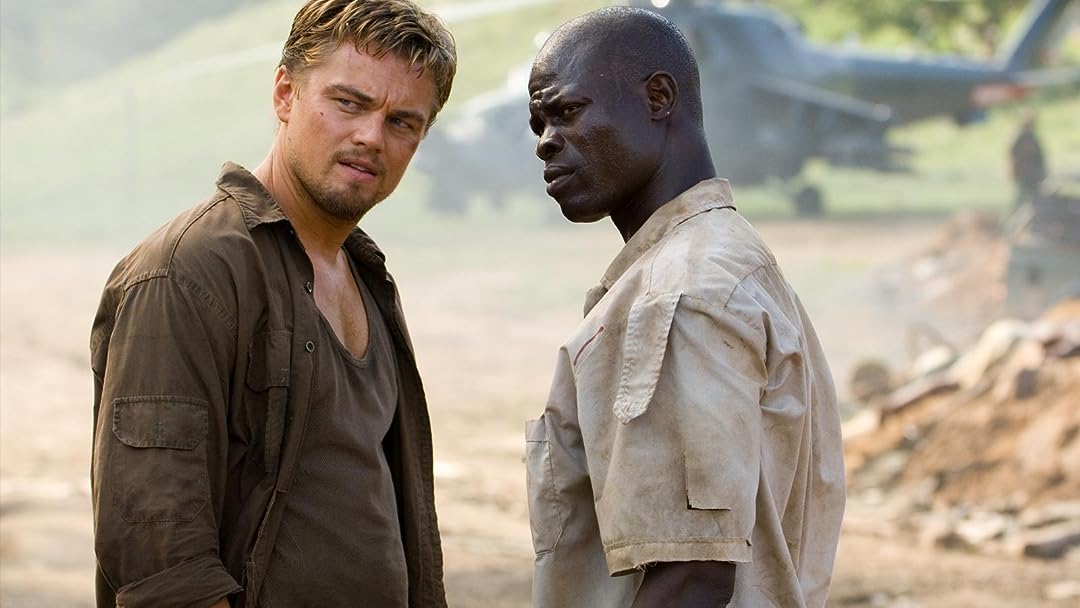 Christina ReynoldsReviewed in the United States on July 17, 2020
5.0 out of 5 stars
Hard to Watch - But Important To
Verified purchase
Blood diamonds: Diamond mined in war zones and sold to finance conflicts (Through the means of affording ammunition and etc)

I avoided watching this movie in full for a long time. Unlike most people, I'm vaguely familiar with the concept of blood diamonds (and other conflict-related trades) and I tend to not enjoy war/political related films to begin with; they can be mundane (and not to mention, hard to follow) and they, to be quite honest, can sometimes feel like a waste of time. After viewing this in full however, I will say -this is a film worth watching regardless of your political affiliations or opinions.

I am a fan of all things controversial, and this film is riddled with concepts and moments that are discomforting when not expected. The violence in this movie is non-stop (and is also mostly uncensored). The
audience witnesses children being kidnapped and forcibly trained to use guns to kill targets at will. There are scenes where drug use is both explicit and alluded to - and, again, children young enough to be in grade school tend to be involved in this kind of activity. For some people this might be a deterrence, but if you're anything like me it's intriguing and ends up demanding the audience to stay engaged.

Building on this last point, the violence in this movie is seemingly never-ending; at times it feels random, but its shown to be very systematic through the use of brief conversations and interactions the characters have with one-another. The best part about the use of violence in this film, however, is how often it is used to /interrupt/ scenes meant to be evoke a sense of peace and order. The violence feels as chaotic for the audience as it does for the characters in the film, and it pulls out a sense of empathy that would otherwise be based purely off of shock-value; nothing about this movie is comfortable to watch (and, it shouldn't be) and the feeling of dread of what might happen next is nothing short of ingenious.

It goes without saying that the acting in this film was damn-near flawless. Djimon Hounsou won an at least 3 awards for best supporting actor for his role - and it was more than well deserved. The emotional range of his character is appropriate given the subject matter, and his performance is as powerful as it is convincing.
DiCaprio's acting is as authentic as usual (paired with an accent that feels legitimate), and I would say this is one of his best performances of his entire career.

My only criticism is this - by the end of the movie, I don't feel as an audience member any better at identifying diamonds that can potentially make me complicit in contributing to this system of violence and chaos. The film ends with a meeting in which the Kimberley Process Certification Scheme was created to restrict the flow of conflict diamonds in the main market, but the film doesn't let the audience know that the success of this meeting is controversial. At the end of the day, it's still up to the buyer to ensure that any diamonds they may or may not purchase don't contribute to any of the actions seen in this film - and a little reminder of that would have sufficed. It doesn't take away from the overall message of this movie, but it would have taken this film just a few steps further in to the right (and morally correct) direction.

A hard watch, but an important one.

Asereht128Reviewed in the United States on April 10, 2017
5.0 out of 5 stars
Best of the Best.
Verified purchase
This movie is an actual masterpiece. I've watched it around 10 times over the years, and it is one of those movies that does not ever decrease in greatness. From the acting, to the plot, to the direction and story line to the bone-chilling truth of what the movie showcases, it is just masterfully done. I love Leo in this movie and Djimon Hounsou's performance as Solomon Vandy is second to NONE and literally gives me the chills and goosebumps and watery eyes every single time. This movie is beyond great. Truly.
18 people found this helpful

Country RefugeReviewed in the United States on May 26, 2017
5.0 out of 5 stars
An incredible story that shows enough reality to understand the context
Verified purchase
This is one of those movies that will stay with me for some time to come. I note that it has been termed 'disturbingly violent' by some reviewers, but that isn't the reason this will stay with me. The mining of blood diamonds is based on forced labor in war-torn countries, primarily to finance insurgents, so I expected violence. What I didn't expect was for this movie to portray such a wide range of humanity--from international greed through what happens to people living in a war zone, to the simple love of family and a desire to restore that family. The story within this movie is moving, tender, violent and powerful.
7 people found this helpful

Lochlan LongstriderReviewed in the United States on July 23, 2020
4.0 out of 5 stars
Intense action and real emotion
Verified purchase
I got this because I had read reviews saying it was like Joseph Conrad's "Heart of Darkness". Conrad's book is layered with metaphor and atmosphere; you have to study it to find it's deeper meanings. This movie is more like a sledgehammer. No fault of the movie, that's what modern viewers want. The story is compelling and the acting is excellent. Djimon Hounsou earned his academy nomination, DiCaprio nails the South African accent, and Jennifer Connelly is believable and ravishing at the same time.
The depiction of the forced recruitment of child soldiers is probably the best ever captured on screen.

Cecelia Aube Reviewed in the United States on October 25, 2020
5.0 out of 5 stars
Watch this movie!
Verified purchase
I'm not great at reviewing films. I had to at least attempt to encourage others to watch this incredible movie. I am a fan of Leonardo DiCaprio and his performance was outstanding. The movie is based on true events. Acting by the 3 main characters is absolutely fantastic. There's violence but it's not overdone as so many movies seem to. This movie will leave you with a little more confidence in the basic decency of men, black and white. The plot is exceptionally well played out. And...the best of endings!

Matthew OlsonReviewed in the United States on October 7, 2016
5.0 out of 5 stars
Deeply engrossing, sadly historical, well worth owning and watching many times!
Verified purchase
One of the best movies of the decade. Piercing story, brilliantly performed, tied together perfectly with a brilliant score. This film brought a small taste of the Joseph Conrad's "Heart of Darkness" back to me through a 21st century lense. You can also watch this movies with different lenses, maybe you like action, redemption, a certainly unconventional love story that perhaps will make you elevate the idea of love despite circumstance. I could go on for pages. Well worth a viewing.
14 people found this helpful

Colleen SReviewed in the United States on December 20, 2012
5.0 out of 5 stars
Blood Diamond is well worth seeing more than once!
Verified purchase
Blood Diamond is a true story of how material objects, greed, and selfishness can get in the way of doing the right thing, having compassion and empathy. If you have a conscience and a good heart it will make you think twice about wanting diamonds instead of opting for CZ or the like. Leonardo is very good and conviencing as a self-centered, greedy guy with a conscience and a good heart- deep down inside. But is it strong enough to make him do the right thing? The other actors in this movie are believable as well in what their mission is and how they feel about the diamond trade business in African and killing for it. At times it's hard to take the horrific scenes of violience; mostly because you know that really happened and still happens today. The price of diamonds is like the price of oil/gas, but is it worth killing and dying and going to war about them? Are diamonds really as necessary to have as oil/gas? It's the kind of movie that really gets you involved with what is happening to the characters and after the movie is over it sticks with you-in your mind and heart- and you want to talk with someone who has seen the movie. I would call it a must see movie for many reasons, but if you're looking for a romantic comedy this is not the movie you want to see. It does have just about everything else though- drama, action, truth, and good acting and cinematography.
2 people found this helpful
See all reviews
Back to top
Get to Know Us
Make Money with Us
Amazon Payment Products
Let Us Help You
EnglishChoose a language for shopping. United StatesChoose a country/region for shopping.
© 1996-2022, Amazon.com, Inc. or its affiliates