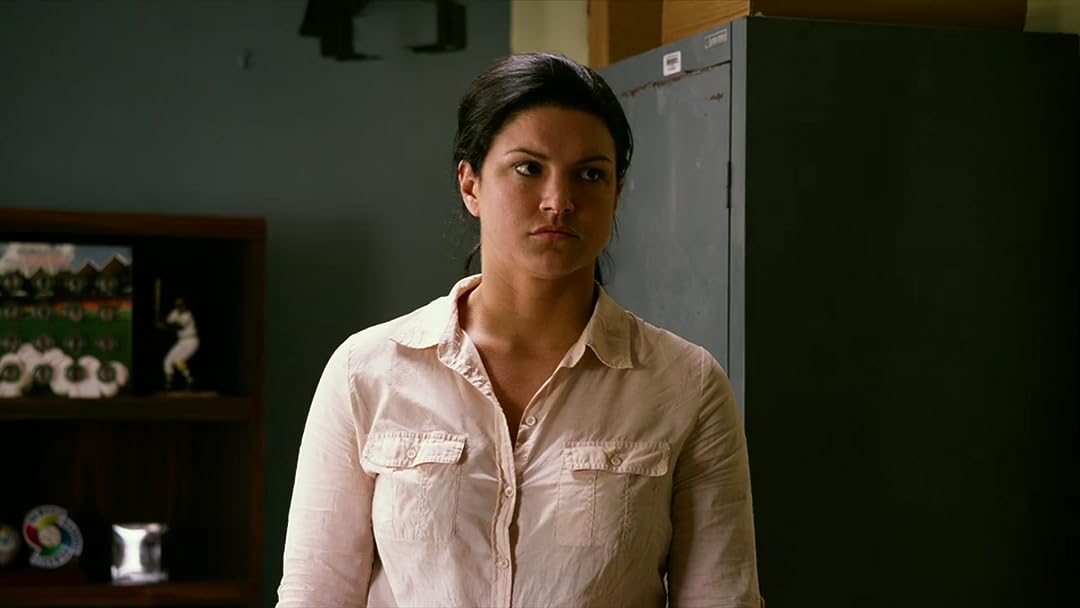 (987)
5.71 h 47 min2014X-RayR
Gina Carano (HAYWIRE) stars in this dynamic thriller as a vigilante bride who must outwit and outfight a foreign underworld to uncover the secrets behind her husband's disappearance.

Chad EagletonReviewed in the United States on September 20, 2019
3.0 out of 5 stars
Solid Action Flick
Verified purchase
I’m a huge Gina Carano fan. She’s gorgeous, she’s fit without looking like she’s starving, she has an infectious smile, and she legitimately knows how to fight. For the life of me, I don’t understand why her career isn’t huge (I still think she should have been cast as Wonder Woman). The only negative thing I can say about her performances are, as much as she’s always improving, she still comes off a little stilted with her line readings. But a smart studio would pay for acting lessons while developing the right project and then set back and collect the box office.

Like with most action movies, the plot elements here are all very familiar but the film makes up for it with a strong cast and not wasting time. There’s some great general action sequences (the zipline stuff is fantastic and tense, the hospital showdown is great, the ending chase scene is fabulous). The fight scenes are good, realistic and direct. They could’ve have used better framing (director John Stockwell still has a lot to learn about filming a fight—see his absolutely horrible WWE film Countdown) but I’ve gladly watched far worse.

Overall, totally worth your time if you're into action films.

ReviewReviewed in the United States on October 22, 2019
5.0 out of 5 stars
An Extremely Rare 'Wife Goes To Bat For Her Husband'
Verified purchase
It is really refreshing to see a wife go to bat for her husband as a newlywed on a honeymoon no less, even if she is a fictional character in a movie. How rare and unusual is that these days? I can just hear many asking, well why not wait to see if he's worth the effort first?. Martial artist extraordinaire Gina Carano delivers the goods as Ava who passionately and violently searches for her husband who has been kidnapped by a thug on a Caribbean island for his bone marrow of all things. Said thug has his own gang which includes the cops who make matters much more difficult for Ava, but her skills are more than a match for them. Carano's acting chops and her martial arts talents are great fun in a film that would not have been nearly as much fun without her. I am a Gina Carano fan now and looking forward to see more of her on screen crushing bad guys' bones and passionately loving her husband. I need an inspirational example for my wife to follow.
11 people found this helpful

William F.Reviewed in the United States on September 18, 2019
3.0 out of 5 stars
Great action! Very entertaining; but, with one serious plot defect.
Verified purchase
I'm a huge Gina Carano fan and this movie does not let you down in that respect. She continues to improve as an actor and her fight scenes are probably some of the best in the business. But, was disappointed by one plot issue ** SPOILER ALERT***.......how in the world did the bad guy know that her husband would be a tissue match far enough in advance to setup the zipline accident? Everything else was great; but, this plot defect seems so obvious. Anyway, this movie keeps you interested all the way to the end (although I would have liked to see the look on her father-in-law's face when he sees his son walk through the door with his daughter-in-law....some serious apologies would be in order. Watch the film and you won't be disappointed. Great evening's entertainment.
6 people found this helpful

AnkharaReviewed in the United States on April 7, 2014
5.0 out of 5 stars
I Want To Be Gina Carano
Verified purchase
I am a Gina Garano fan so my review is admittedly biased. This movie was actually a lot better than what I was anticipating. Going from womens MMA pioneer to Hollywood action heroine is a tough leap, but each time I see her, I really think Gina Carano has gotten better as an actress. Mallory Cane was ok and all as a character in her last film, Haywire, but I feel that Hollywood hasn't really found the right niche for Gina Carano. I think this character she plays in In The Blood is a better fit for her than Mallory Kane as it showed off not Gina's awesome fighting skills, but also her natural charm and beautiful smile. And my god is that woman stacked. She is truly built like an Amazon. I think of her in a Wonder Woman costume and only imagine what could have been. Gina Carano has the potential to be a great female action hero given the right vehicle. If anything what I felt this movie lacked was well....more Gina! Seriously, stop trying to make Gina Carano into Meryl Streep. She's gorgeous and charming and man, that girl hits hard! Let's see her doing more of that! I think this movie would have been better if you had explained Ava's backstory more and did less drama. I want to see Gina Carano kicking people's butts, not scenes of nefarious criminals searching houses. Should have made it a straight up kidnapping, explain a little more of her backstory and why she's so good at fighting, and then show her kicking butt!. Overall, I liked this movie, it was definitely worth the rental especially if you are a Carano fan or like to see a strong female action film. Hollywood needs more female action heroes. I look forward to when Hollywood catches up to Gina Carano and finds the perfect action heroine part for her because I find it a helluva lot more believable to see a woman like Gina Carano knock out 4 men in a room than I do Scarlett Johansen.
51 people found this helpful

Original Toe KneeReviewed in the United States on February 7, 2021
1.0 out of 5 stars
Just not believable.
Verified purchase
This is a kind of long form commercial for Gina Carano...however, I jumped clear of it when I realized:
1. the plot is preposterous
2. stupid choices written for the lead characters; make complete bizarre life realities look normal.

furthermore, though the colors and the cinematography are BEAUTIFUL,

Was it necessary to make all the male roles seem so impotent, in order to "shine a light on" Gina????

This is just a lousy flat goofy shallow PREDICTABLE film. Early on, you realize everyone is inept but her, and she will eventually show you were right about that...but first, silly goofy realities are gonna have to be sorted out by her and her alone... Life is never this way... Unnecessary fantasy writing. Gina could have shined in a role closer to reality...easily... if she keeps choosing this sort of baloney, she'' just disappear long with most of the folks who costar with her in this film. Basically, the director has to be some sort of idiot... A few changes here and there, and he could have saved this one... yet... back to reality; this is (I guess) a Gina Carano info-mercial...maybe it was HER idea????
2 people found this helpful

SharePoint GuruReviewed in the United States on January 9, 2021
4.0 out of 5 stars
Is What It Is
Verified purchase
No one is going to choose this movie because they were looking to be intellectually challenged. Little hot woman. Little action. Little revenge. Little rough around the edges. The expectations for Gina Carano and her character were set from the beginning. Treat WIlliams always overacts and he did. Luis Guzmán was outright lame as the island sheriff. Danny Trejo was his typical nasty looking thug. There wasn't much of a script. Throughout I got the impression that Gina Carano was trying very hard to prove herself as a serious actress and everyone else was embarrassed to be in this movie and only in it for a payday.

Remember how awful Megan Boone was in the first episodes of The Blacklist. James Spader didn't waiver. He brought her along, helped her develop. That fit with him being the master. Gina Carano was rough in this movie, which fit. What brought the movie down was everyone and everything else around her. Set your expectations accordingly.
One person found this helpful

jstew100Reviewed in the United States on October 13, 2020
1.0 out of 5 stars
Criminally Bad
Verified purchase
I never review movies but it is a crime that Gina Carano is being wasted on garbage like this. If you have seen Haywire you know how good she can be. At least she is playing a strong fighter who is forced to rescue her husband. But the plot is terrible, the characters are terrible, most of the action makes no sense, and at the end she thanks the dude who got her husband kidnapped "for everything." I pray this was the last movie John Stockwell is ever allowed to direct.
3 people found this helpful

Molly A. BlockReviewed in the United States on January 17, 2021
4.0 out of 5 stars
Hold on to your seats and popcorn, folks! What a wild ride!
Verified purchase
This movie was action from the beginning! I mean, just a couple of minutes into it and HO-LEEEE COW! Action all the way through. Lots of killing and blood and gore, so you don't want your kids to watch it. But adults, this is one heck of a movie! I'd give it a solid 5 stars EXCEPT that the acting was a little bad here and then. I felt like some of the protagonist's emotions weren't quite real enough. I kept thinking that man, if only Angelina Jolie had this part...... But other than that, 4.5 stars! And it had a lot of plot twists that I was NOT expecting. Especially the reason all of this unfolded-- due to the agonist's um, "needs." I don't want to spill the beans here. But wow, NOT what I was expecting! A great movie, with a great plot, even if sometimes it felt really fake.
See all reviews
Back to top
Get to Know Us
Make Money with Us
Amazon Payment Products
Let Us Help You
EnglishChoose a language for shopping. United StatesChoose a country/region for shopping.
© 1996-2021, Amazon.com, Inc. or its affiliates