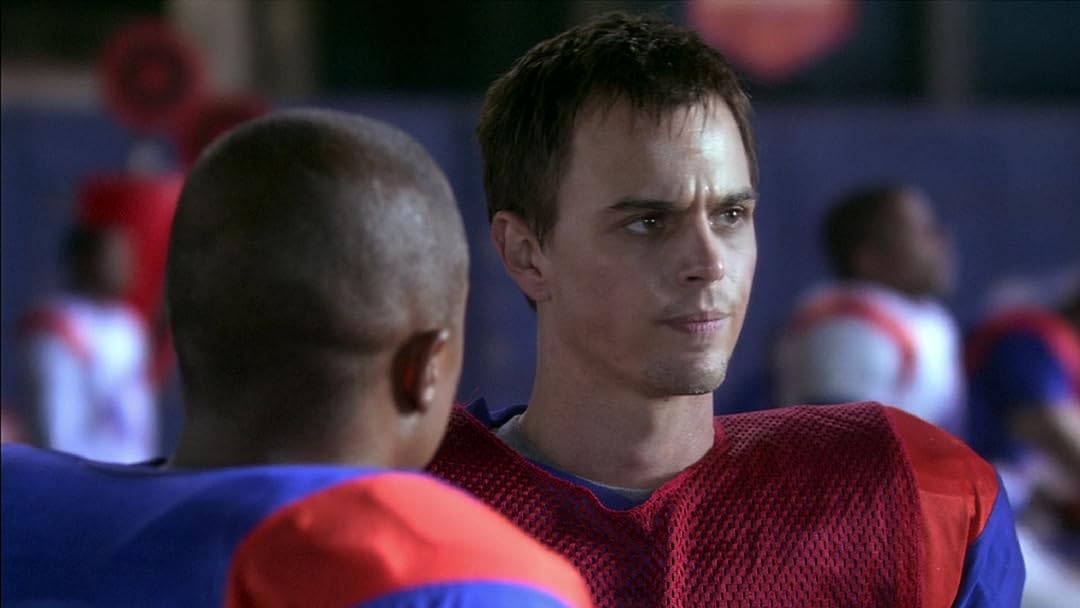 (29)
2010X-RayTV-MA
At Blue Mountain State, the benefits of being a player on one of the most successful football programs in the nation are just too good to pass up... beautiful girls, campus-wide celebrity and wild keg parties make college life a young man's dream. The new Freshman players on this notorious team are about to learn the extreme highs -- as well as the pitfalls - of being one of the chosen few.

After selling my DVD copies, I was excited to see Amazon had it on streaming. Then I watched the first episode. This is EXTREMELY edited from what was on the DVD's, and what was on other streaming services previously. The first episode was edited so bad from the original that half the story (Sammy's part) didn't make THAT much sense, and a lot of the dialogue that created the conflict between Sammy and the mascot, and Alex and Thad, was taken out. You would think they would remove more of the toilet humor (which is wonderful, and a favorite reason to watch the show), but they removed barely any of that. Leaving most of the first episode without a whole lot of plot, but the toilet humor. It made for disappointed watching, as a lot of the jokes that should have landed fell flat because Amazon (I'm assuming) literally edited out removed the setup.

5 stars for the normal edit of the show. It's a classic. Minus 2 stars for Amazon's edit / butcher of the series.

Digital KnightReviewed in the United States on October 4, 2020
1.0 out of 5 stars
Good series
the one star rating is for Amazon editing out entire lines of dialog and cutting scenes short ruining the comedic intent of the creators
16 people found this helpful

Richard A. ColeReviewed in the United States on October 23, 2020
2.0 out of 5 stars
Edited and lame
I had read this was edited. I already thought this was a lame show. But watching this on another platform, I saw how much it was edited, and Prime edited the heck out of it. The fake nudity and sexuality only made BMS to be more inane than it should be. A college movie/series about college and sports with no nudity is a waste of time. This night as well been shown on the USA channel. Don't bother watching this crapper, not worth the time.
8 people found this helpful

Amazon CustomerReviewed in the United States on August 29, 2020
5.0 out of 5 stars
Amazingly hilarious and inappropriate show
This show is basically what we all wish our college experience was like, filled with all the hilarious cliches and urban legends that usually go hand in hand with college.
5 people found this helpful

Jim WReviewed in the United States on August 23, 2020
5.0 out of 5 stars
Its great
Love this show
4 people found this helpful

Eleven bang bangReviewed in the United States on October 20, 2020
5.0 out of 5 stars
Too good for its time
Had this show been in the 90's or early 2000's it would have done better. However, with the "politically correct" society in which we have gone to, this show it too offensive. Damn good series.
2 people found this helpful

B.C.Reviewed in the United States on October 7, 2021
5.0 out of 5 stars
Teenage Guy Show
Straight up, this is a teenage guy show. I watched it freshman year of college and dying laughing every episode. Still do years later because it is so over the top. This is not a family friendly show. It is purely dumb guy humor and I loved it.

GeorgeReviewed in the United States on October 26, 2020
5.0 out of 5 stars
The best sports show of all time.
I hate football but the cast is sooo good in this show that I've now watched it twice through. Thad and Mascot are two of the most memorable characters ever.
See all reviews
Back to top
Get to Know Us
Make Money with Us
Amazon Payment Products
Let Us Help You
EnglishChoose a language for shopping. United StatesChoose a country/region for shopping.
© 1996-2021, Amazon.com, Inc. or its affiliates