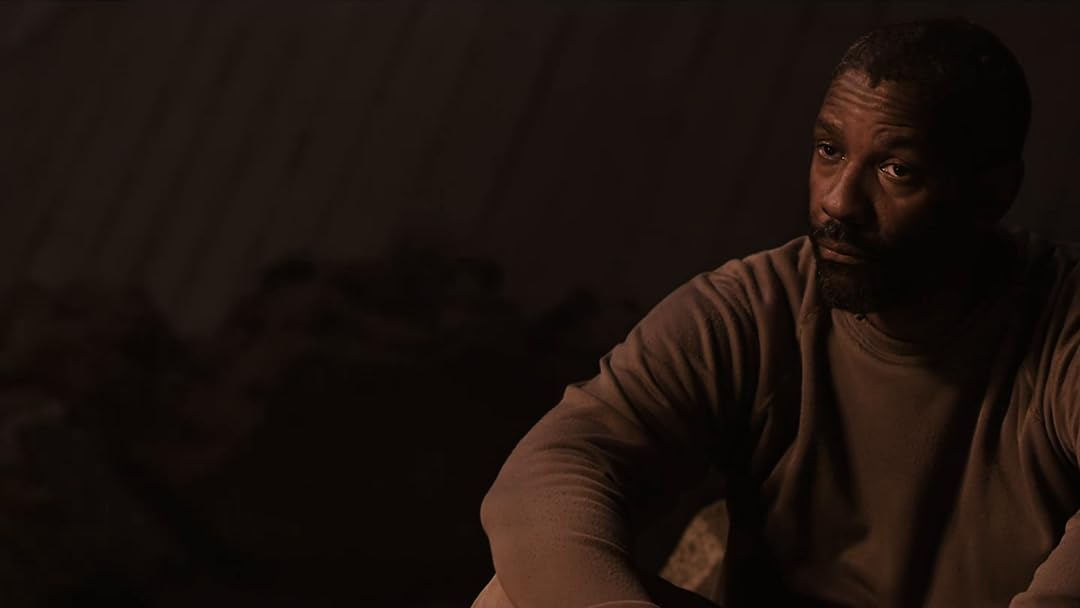 The Book of Eli

(12,477)
1 h 57 min2010X-RayR
A lone warrior (Denzel Washington) wanders the post-apocalyptic desert that was once America, battling lawlessness to realize his hope of a better future.

joel wingReviewed in the United States on May 6, 2020
4.0 out of 5 stars
Postapocalyptic story where knowledge equals power
Verified purchase
Book of Eli was a post-apocalyptic tale directed by the Hughes Brothers. It featured Denzel Washington as Eli, a man on a quest to get to the west coast. He was bringing knowledge with him, which Gary Oldman as Carnegie believed could be used to seize power.

The movie’s world is about survival and desperation after things have been destroyed by nuclear war such as when Eli hunts a cat for food. It’s about kill or be killed as he comes across a woman faking to be in distress which is actually an ambush for a gang. Eli doesn’t like this world. He’s a man apart. He doesn’t like using violence even though he often has to. He doesn’t like how callous people have become because he’s religious. At the same time he feels like he’s on a mission and has to ignore the evil around him.

Eli comes into a town run by Gary Oldman as Carnegie simply seeking a place to temporarily stay, but gets caught up in the politics of the place. Carnegie is searching for a Bible so that he might use it to organize society once again with him at the top. When he finds out that Eli might have a copy he tries by hook and by crook to get it. That includes sending in Mila Kunis as Solara to seduce him and his henchmen led by Ray Stevenson as Redridge to kill him, but they all fail. That creates the dilemma for the movie as Eli is caught up with Carnegie and company when he just wants to go west.

The movie has great settings portraying the destruction of the world. Denzel as usual does a fine job in the lead. I suggest people watch it two times because when they go back through it they’ll understand it better, especially the twist at the end.

K. WoodworthReviewed in the United States on August 18, 2016
5.0 out of 5 stars
Like a book of the Bible
Verified purchase
This film is told like a biblical story. A lone wanderer progresses through the vicious society that the world has become, intent on a mission that is gradually revealed to us. He is protected from the literal slings and arrows of those who would prey on him, but he is no passive penitent; instead he is more like a warrior monk with magical skills in the martial arts. The wanderer progresses, although no one else does, except for a young woman who insists herself into his company. Gary Oldman as Carnegie is the perfect wicked Biblical King, who is confronted at his end with the despair of his own Godless emptiness, his empire falling down around him. Eli is transformed into a kind of sainthood. At the very end is Eli's prayer, which to me is an archetypal example of how one can converse with God. At times the movie lapses into excessive detail of dark scenarios, but so do some of the books of the Bible.
73 people found this helpful

Terry HReviewed in the United States on August 16, 2020
5.0 out of 5 stars
You do not want to miss this one.
Verified purchase
A profound tale of an apocalyptic future with a marvelous hopeful twist. Maybe one of the best actors in Hollywood altogether, Christ-connected in his own right and personal life, I can tell. It's one of those stories that keeps you wondering what the heck is going on in so many ways. You'll probably think about this movie and put together little bits and pieces over a following week. Why is he doing it this way why is he doing that that way? Near the end it all becomes very clear. Then you say "OH!
MY GOD!" I believe this was probably a God inspired story. You do not want to miss this one. He probably would have paid to take this role. Superb movie. Best I've ever seen. Gamers won't get it, horror addicts won't really get it, two types get it. Christians and Satanists.
10 people found this helpful

NosidinoReviewed in the United States on April 18, 2018
4.0 out of 5 stars
A Solid Four Star Film
Verified purchase
Unlike The Road, The Book of Eli does not linger on the bleak, morose and desolate dying Earth. The world in Book of Eli while barren and hot, is also filled with brutal killers and savages, but there always appears to be a light at the end of the tunnel. I liked that. Coupled fine performances by Denzel Washington, Mila Kunis and Gary Oldman, we see the best of both worlds here.

In a way I wish Mila and Denzel's characters could have walked with Viggo and his son in The Road. I doubt any of those cannibals would have survived to tell the tale. I'm talking the guys on the truck and the mob that chased and murdered the woman and her child. But getting back to Book of Eli, I think the town and the ruthless bully boy gangs seemed a bit too much. All of the men seemed to take orders from Carnagie unconditionally. This puzzled me, especially after the first town shootout (Which Killed 10 Or 12 men) and the melee in the bar which slew 15 people. That would have been half his gang of enforcers dead or seriously wounded. Yet we see in the end what happens when there are not enough enforcers to enforce his will.

I liked this film better than The Road mainly because there was a "light at the end of the tunnel." This allowed me to dream that things would get better for the planet. Nothing like that existed in The Road, which may have been more realistic, yet in movies we search for escapism not realism.

Mila Kunis plays Solara, and she is incredible. She goes from being a naïve barmaid to an attempted rape survivor to a tough chick that kills and maims and garrotes those in her way. The guy who wanted her made a big mistake underestimating her tenacity. When she got out of the truck and tossed that grenade with super accuracy I said to myself--look out--boom!

Both The Road and Book of Eli have numerous allusions of cannibalism. The Road is the most literal representation of this horror, whereas Book of Eli cannibalism is mostly alluded to yet it is no less frightening. I give this DVD Four Stars. I'm the 1972nd person to review this film. I also want to say how I loved the graphic novel that was produced about Carnegie's life pre nuclear holocaust. It explained his character and made me understand why he was motivated the way he was to seek the Bible--even though it cost him 85% of his men and the use of his leg due to the poor medical technology of the time. Buy it and you will enjoy it more than The Road. Although Viggo Mortenson's performance in that film (And Kodi's) were spot on. Yet Leonard Maltin only gave Book of Eli Two or Two and a Half Stars out of Four. He gave The Road Two and a Half Stars to about Three Stars. See my reviews for both movies.

bmoreReviewed in the United States on November 24, 2020
5.0 out of 5 stars
Christians read and understand THE BIBLE
Verified purchase
The Book of Eli is an example of every effective christian because Eli had read and stored THE WORD in his very being. He believed in what GOD had sent him to do and he accomplished it. He exemplified that nothing could take him out until GOD had fulfilled His purpose in him. In short this movie is an example of staying focus on THE WORD OF GOD and whatever we know beyond a shadow of a doubt what THE LORD JESUS-GOD ALMIGHTY has ordained or spoken to us to do.
7 people found this helpful

LittlebipReviewed in the United States on September 11, 2018
5.0 out of 5 stars
Finesse by Washington
Verified purchase
One of my favs, and anything Denzel Washington does is awesome. Interesting and prophetic, with cool and thrilling plot twists and well-done side-characters. Slow at times, but that truly fits the realism of the story, and much more creative than the typical apocalypse tale.
16 people found this helpful

John M. SwansonReviewed in the United States on August 22, 2017
5.0 out of 5 stars
Denzel
Verified purchase
I think Denzel is one of the best actors and own a lot of his work. He does so well in everything he goes out to do. These movies shows that he a talented actor I wouldn't mind having lunch with him and talking about his success and what he has planned for his future. I love this particular movie because it doesn't put the Bible down but raises it up to the value is should be.
16 people found this helpful

Rory WhiteReviewed in the United States on March 18, 2017
5.0 out of 5 stars
Action, weird, brilliant, and actually pulls of a Judeo-Christian theological nuance, without degrading others. Wild ending.
Verified purchase
I never would have thought the Road Movie (Post Apocalypse type) could ever appeal to me,
but through the storyline, Denzel Washington's amazing handling of the character, and
mind boggling pneumatically layered surprise ending, with an actual Judeo-Christian theological
nuance (without slamming other religions), it was great. Gary Oldman being as weirdly weird as
only he can be (extremely good actor) and a fascinating role for Jennifer Beals who plays a low
key and very evocative role. If you hate post apocalyptic road films, but could imagine one being
good, this one would be worth watching... but i think you'd have to watch it with full attention, not while
doing photoshop in another window, or doing house chores.... again, mind boggling surprise ending, or
so i thought.
24 people found this helpful
See all reviews
Back to top
Get to Know Us
Make Money with Us
Amazon Payment Products
Let Us Help You
EnglishChoose a language for shopping. United StatesChoose a country/region for shopping.
© 1996-2022, Amazon.com, Inc. or its affiliates