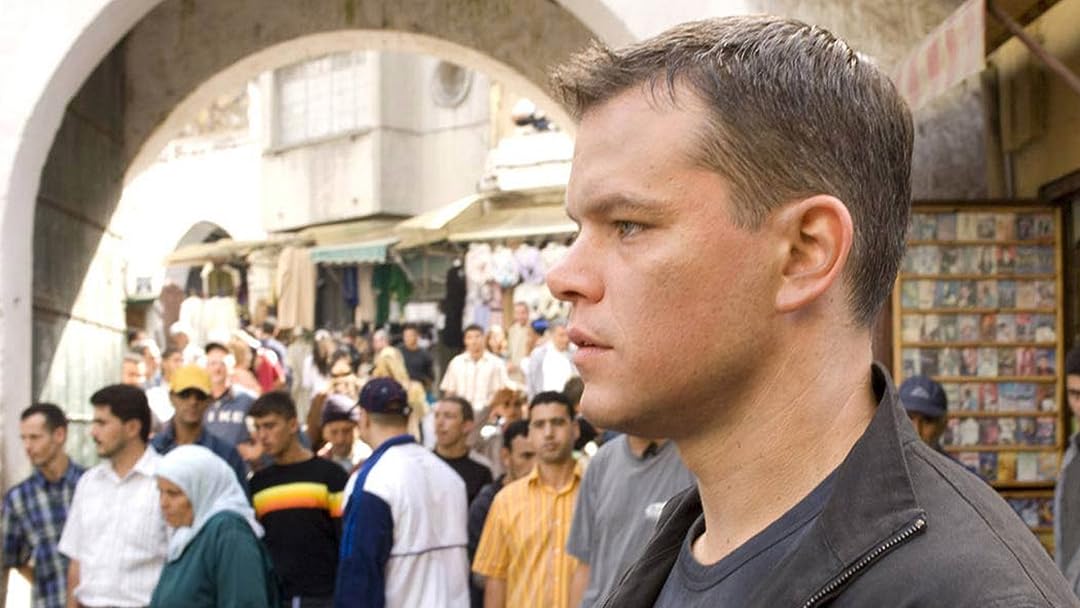 (7,303)
8.01 h 55 min2007X-RayHDRUHDPG-13
Matt Damon returns as highly trained assassin Jason Bourne, who is on the hunt for the agents who stole his memory and true identity. With a new generation of skilled CIA operatives tracking his every move, Bourne is in a non-stop race around the globe as he finally learns the truth behind his mysterious past.

Rentals include 30 days to start watching this video and 48 hours to finish once started.
Add to
Watchlist

Save with with the Bourne movie collection on Prime Video shop now.

Austin, TexasReviewed in the United States on January 8, 2021
1.0 out of 5 stars
Ruined with motion sickness
Verified purchase
Enough action in the story itself. The shaky camera always moving is such a distraction. When it first came out I wanted to see it so much that I endured forced myself to make it through but left the theater back then sick and had a head ache. So here it is on Prime Video and all these years later I thought I'd try again. Nope. Can't do it. What could have been a good film destroyed by motion sickness. What were the DP and director thinking their artistic statement would be a good thing and in some wild imagination be something that would lend itself to telling the story? NO! Ruined it! Why did the studio allow this desecration? Should have gotten into the first daily and said the DP must have been drunk - he's fired and we'll have to reshoot but on a tripod this time. Too too much camera movement too too much quick cuts herky-jerky in dimly lit blue light with lots of extreme close ups. Unwatchable.
23 people found this helpful

Simon JesterReviewed in the United States on January 23, 2022
1.0 out of 5 stars
Unwatchable
Verified purchase
For some reason the picture "dances" all over the place. There isn't a single steady cam shot in any scene. Every frame of the movie vibrates and makes everything difficult to see. I don't know why the director thought this was good idea. The story is really convoluted and piecemeal. The telling of the story is done very poorly too. Everything about this movie was disappointing because I was told it was really good. I think the only people who would like this movie are the kinds of people who like to indulge in conspiracy theories.
5 people found this helpful

NhanReviewed in the United States on January 14, 2022
2.0 out of 5 stars
Story is confusing and cinematography is awful
Verified purchase
This is the only Bourne movie I have seen since the others are not available on prime at this time. I think this is the 3rd installment in the series, and to be honest the story is completely incomprehensible to a first time viewer. There are many flashbacks to the previous movies, but I don't think a sequel should solely put their stake in the viewers being aware of the events of the previous films in order to grasp a general understanding. Think Indiana Jones and the Last Crusade, Empire Strikes Back, Back to the Future Part II and III. These are great sequels that, while enjoyed better with an understanding of the cinematic universe, are nonetheless good movies in and of themselves that do not necessarily require rewatching the previous films. I had to pause the movie several times and read Wikipedia plot summary up to the point I was at in the movie in order to understand it. Heck I didn't even know who was a good guy or bad guy for a lot of it.

The cinematography was plain awful. I know this point has been beaten to death ever since these movies came out, but seriously this would go down a lot better if they just had access to a tripod. Even in the dialog scenes the camera has to be held by a 5 year old on uppers. Why? I guarantee the stunts and fighting are probably great judging by the budget, but unfortunately it is obscured by shaky camera nonsense.

joel wingReviewed in the United States on January 10, 2021
4.0 out of 5 stars
3rd installment of the Bourne series still bringing the action & intrigue to the spy thriller
Verified purchase
Jason Bourne movies were created as a new take on the spy thriller genre popularized by James Bond which had gone sour before the arrival of Daniel Craig. Like 007 Bourne became highly popular and started a new franchise with this being the third movie in the series. IN this one Bourne was still looking into the Treadstone program that made him an assassin. He runs into an overzealous CIA Agent Noah Vosen (David Strathaim) that is running an expansion of Treadstone and who wants to kill everyone that comes into contact with Bourne.

Like the good movies in the franchise this one is full of intrigue as Bourne and the CIA are playing cat and mouse with each other. All of the action is also highly stylized and choreographed and very well done.

bignutjamReviewed in the United States on January 15, 2021
5.0 out of 5 stars
Still kicks butt 13 years later
Verified purchase
This is a strong third addition to the Bourne series, and it makes me so nostalgic for the Hollywood of this century's first decade.
You can't make movies like this anymore. It's not woke enough, even with Pamela Landy playing such a strong role.
Today, you would have to cast Nicky Manij in Joan Allen's role, Idris Elba as Bourne, and ALL the evil CIA guys would be racist white guys, who holler the "N" word at Bourne (Elba).
The movie industry is suffering with the lock-downs in blue states, and it seems they're going to have to find another way to release movies to the viewing public.
Until then, that ancient proverb still holds true; "Get Woke; Go Broke!"
I, for one, couldn't be happier
4 people found this helpful

ChrisSherrillReviewed in the United States on January 12, 2021
3.0 out of 5 stars
Three and one-half
Verified purchase
This is not as good as the first two. It is better than the attempt at a fourth one, which had a new Bourne and really blew. This one had a thin plot. They covered up an ailing storyline by putting in more and longer chasing and fighting and 'stalking' scenes (Nikki pursued by the assassin). This one had a lot of jumpy camera work, too. I'm not a movie maker so I don't get the need for that, but there must be some reason. The first two had some but I think this one had the most of the three. Also, it's too bad they couldn't follow up on the Nikki subplot. I thought she added to each of the other movies. She's a solid performer with great facial expressions. She and Bourne might have gone into business together. Doing what, I don't know. Anyway, I would give the first Bourne movie a five and the second a four. This one maybe only deserves a three but I felt generous.
2 people found this helpful

Cyrus WebbReviewed in the United States on October 3, 2021
5.0 out of 5 stars
I've seen this so many times, but it never gets old. Had to buy it. BOURNE ULTIMATUM delivers!
Verified purchase
Have you ever had a movie that stays with you, delivering all the emotions you want in a great film and keeps you coming back? BOURNE ULTIMATUM is one of those movies for me. I remember going to the theatre to watch it, and years later it's one of those I keep going back to for entertainment.

Matt Damon's Bourne character is one of those that tells us so much about life and the choice between right and wrong. As he has gone through the series and tried to understand who he is, he's also been able to show that assassin or not you can CHOOSE to hold on to your humanity.

Love how the other characters play their part in this dance between what is good and bad, right and wrong---and all have to make choices they can live with.

A great movie that I've seen so many times but keep watching. It's just that good.
One person found this helpful

zerofaithReviewed in the United States on September 7, 2017
4.0 out of 5 stars
Its another Bourne movie, you know what you're getting.
Verified purchase
Pretty good, like all the Bourne movies. I don't want to seem down on it too much but I really don't remember what happened in the movie. You may think that would make me a bad reviewer but I think it makes this review pretty accurate. I've seen three of these things and every time I finish with the same feeling. Too well made for 3 stars, not compelling enough for 5. Our protagonist runs circles around everyone else because hes' the best and you feel like you got your money's worth for time invested. I expect your feelings on this one will be about the same as the last two but maybe if you're really into the series you may have more varied feelings on this installment.
12 people found this helpful
See all reviews
Back to top
Get to Know Us
Make Money with Us
Amazon Payment Products
Let Us Help You
EnglishChoose a language for shopping. United StatesChoose a country/region for shopping.
© 1996-2022, Amazon.com, Inc. or its affiliates