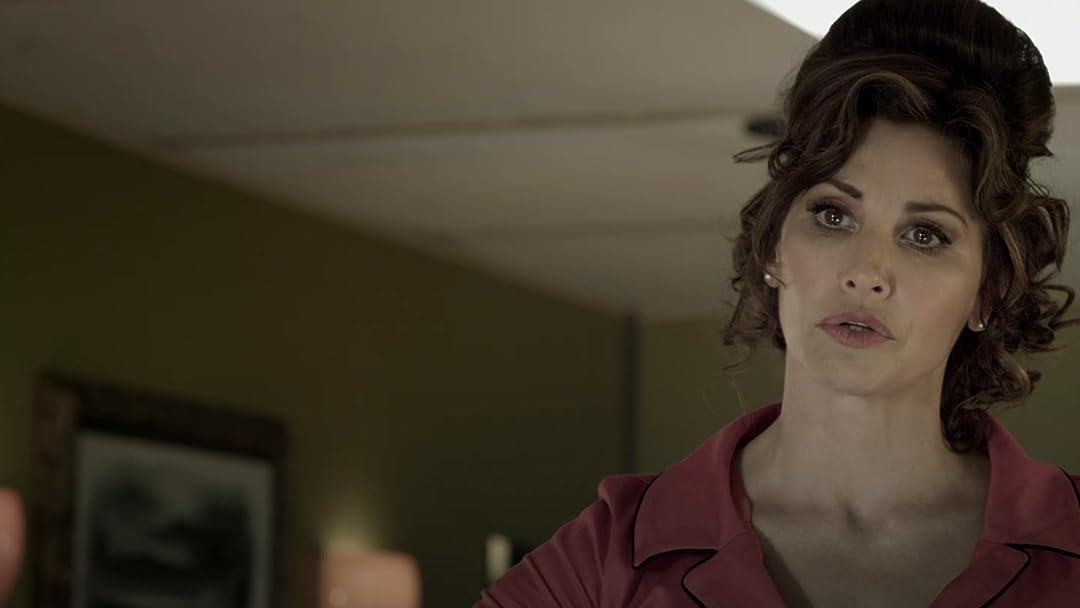 (95)
1 h 31 min2016R
After killing her bank-robber husband (Val Kilmer), a Texas housewife (Gina Gershon) must dispose of the body and find the loot while avoiding the local sherriff (Ray Liotta).

DetectorReviewed in the United States on January 3, 2021
4.0 out of 5 stars
kinda fun all the way thru
Verified purchase
Much like a stage play, or more pertinently, a 3 camera tv comedy serial, there are only 7 players total, and in much of the film only 2; about 95% was filmed inside an old trailer. Imagine the I Love Lucy show, filmed in a trailer, with Lucy and Ethel mugging it up while they inadvertently murder Ricky, and fall deeper and deeper down the rabbit hole trying to avoid detection while also trying to find a stolen 100k in stolen cash, all the time, chain smoking and knocking back a fifth or two of Black Daniels. Thing is, the writing is a lot more poetic than I love lucy, full of vivid allusions, and even obscure American history...I mean, how many viewers know the history of Billie Bowlegs and the 3rd Seminole War? That's not the kinda trivia ya stumble across in amazon prime movies every day, now is it? So, i had to give it 4 stars, and I feel fine about it.
2 people found this helpful

AstridReviewed in the United States on June 9, 2021
1.0 out of 5 stars
horrid and unoriginal
Verified purchase
one of the best things that happened in this movie was killing val kilmer right away. he is one of the worst actors in the last century. he couldnt even get a trailer trash accent together and we all know how dreadfully painful it is to watch kilmer try accents of any sort. the 2 female actresses were equally phoning it in, but no one can act as crappily as val kilmer. as far as originality or expanding a genre this movie offers nothing less than sub standard cliches and pure imitative direction without any sense of style what so ever except what some one else already did exactly the same way. horrible, lazy and substandard in every way down to the lighting, script, music and timing.

VelvetReviewed in the United States on May 30, 2018
5.0 out of 5 stars
Over the top funny in a black humor kind of way
Verified purchase
First off, do not expect an intellectual movie, you would be disappointed. If you are in it for a good time, laughs and quirky situations, and shenanigans, you will enjoy this hilarious, somewhat black comedy. My husband and I both had a relaxing good time with the twisted story of all too-human, albeit over-the-top funny entanglement of intrigues, fibs and human shortcomings in all departments.
I think I'll bring it out again for Halloween this year, as it is 100 times better than the chainsaw massacre movies, and just as gory, lol!

Sit back, relax and enjoy and laugh as if there was no tomorrow!

john nonestiedReviewed in the United States on May 30, 2021
5.0 out of 5 stars
Twisted Texan characters in an equally twisted dark comedy.
Verified purchase
Acting, music, camera work were all spot on. Non-stop dialogue from stereotypical, small-town, Texas locals. Played out in the heat of desert venue. Lots of surprises. Ignore all the blood. It was still amusing. Similar 'feel' as Cool Hand Luke. Hot, dirty, gritty, lonely, intriguing and humorous. Not funny ha ha. Humorous!

Rich B.Reviewed in the United States on November 21, 2019
4.0 out of 5 stars
Some great dialogue scenes.
Verified purchase
This was worthwhile to watch, kind of a fun movie. I like the twists throughout the movie. Although, the ending was predictable just a few scenes before the ending. I don't think the writer intended it that way, I think they intended it to be the ultimate last twist in the show.
3 people found this helpful

Glama PussReviewed in the United States on December 5, 2021
4.0 out of 5 stars
Very enjoyable, funny, and...
Verified purchase
a great ending to boot. I enjoyed the crazy plot, the acting even tho Kilmer looked so fat and old and I didnt even recognize his voice. Only sped-thru the musical montages which thankfully were very few. Highly recommend.

Kiki GarciaReviewed in the United States on November 21, 2019
3.0 out of 5 stars
confused
Verified purchase
you have the X-ray mixed up with the Richard Gere movie of the same title breathless
2 people found this helpful

Amazon CustomerReviewed in the United States on November 27, 2019
1.0 out of 5 stars
Not good.
Verified purchase
Not for me. Just seemed like dumb hicks on film. Not funny, not enticing, just boring.
2 people found this helpful
See all reviews
Back to top
Get to Know Us
Make Money with Us
Amazon Payment Products
Let Us Help You
EnglishChoose a language for shopping. United StatesChoose a country/region for shopping.
© 1996-2021, Amazon.com, Inc. or its affiliates