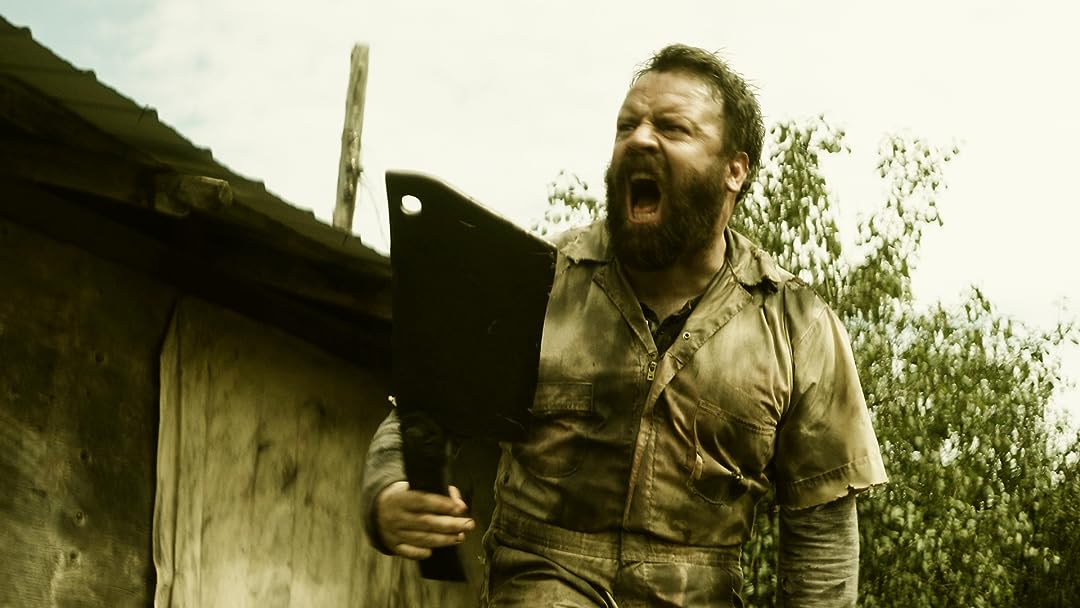 (1,552)1 h 32 min2021X-Ray16+
1998. After the death of their mother, brothers Owen and Oswald Watson are two vicious men left to their own bloody devices in the backcountry. Their twisted fetishes and lust for violence blossom when strangers wander into their dark realm and soon the cleavers are chopping up fresh meat for the wretched flesh-eating creature, they've got locked up with them.

Robert BurnsReviewed in the United States on August 22, 2021
1.0 out of 5 stars
Grotesque horror. Amazon should not have made this available.
Verified purchase
This film should not have been made. The grotesqueness and savagery in it says much about its writers. Has cinema dropped so far that this sort of filth and horror is allowed? Not even Hitler's SS or Rome's imperatores could have thought of more cruelty and filth. We are all aware that civilization is on the fast down war decline into chaos. It doesn't need fimls like this to hasten that decline.
14 people found this helpful

Matthew SnopenhauerReviewed in the United States on February 8, 2021
3.0 out of 5 stars
Well-photographed but ultimately empty Canuck torture porn
Verified purchase
What saves this film is its excellent cinematography and a few narrative twists. Apart from that there's not much in the way of ideas or anything that memorable. Travelers break down, there's a cannibaloid family nearby, etc. The acting verges at times on awkward, as does the pacing, but both end up sufficient. 3 brothers of varying evolution live in a rundown farm where they kidnap travelers-- it's pretty much Canadian Chainsaw Massacre. The most de-evolved brother is hinted at but not shown until the last six minutes, and it's pretty funny. I saw some twists coming and one I did not. The film is pretty gory. The actors are pretty forgettable: the lead brother and the final girl both stand out. The film is well-done technically: it sounds good, looks good, etc., but it suffers from an unoriginal plot. As an homage film it's fine, but it breaks little new ground. It's low budget but doesn't look it, but sometimes scenes/sets feel artificial rather than the true griminess the filmmakers were going for. It's basically Wrong Turn with Canadian accents.
9 people found this helpful

HoppyRooReviewed in the United States on August 6, 2021
2.0 out of 5 stars
Sorry - 2 Stars from me...
Verified purchase
There are some redeeming qualities about this flick...

Acting - par to slightly above-par
Camera work / Lighting - pretty good
Audio - was adequate
SFX - hit/miss... I don't mind shots off camera and letting people leave it to their imagination, but they did that like 1/2 the time, and when they did that on camera it was only "o...k..."

The major let downs were really in the plot... This plot has been done 1000 ways to Sunday, and this really didn't bring anything new to the table... AT ALL... This movie was so predictable... I could literally just watch the 1st 4-5 mins and have written the rest of the script in my sleep... 1 or 2 slight alterations and I would have nailed it 100%... that was some lazy writing...

Officially, I'd go 2.5 stars, but rounded down to 2 for really just being a cookie cutter script with nothing new to add to the genre...

WALTReviewed in the United States on July 30, 2021
5.0 out of 5 stars
ONE OF THE MOST RAW FILMS EVER MADE
Verified purchase
IF YOU CAN REMEMBER THE ORIGINAL FILMS.........TEXAS CHAINSAW MASSACRE AND THE HILLS HAVE EYES.......YOU MAY HAVE A VIEW INTO
THE BUTCHERS. LIVING ON THEIR OWN, SEVERAL BROTHERS AND A FLESH EATING......THING......DETOUR OR REROUTE VISITORS TO THEIR
DILAPIDATED HOUSE, MAKE THEM PRISONERS AND OUT COMES A GIGANTIC BUTCHERS KNIEF. TWO COUPLES FIND THEIR CAR BREAKS DOWN AND IN WALKING TO THE LOCAL GARAGE, OWNED BY THE TOTALLY INSANE BROTHERS, ARE IMPRISONED. DO NOT UNDERESTIMATE
THE POWER OF THIS FILM. IT TERRIFIES THROUGHOUT AND EVEN HAVING A SNACK IS DIFFICULT. MANY SCENES ARE X RATED WITH SEX,
LANGUAGE, CANNIBALISM, AND WORSE. ERGO, A VERY GORY AND RAW FILM, ONLY FOR HARD CORE FANS. AMAZON FULLY CAUTIONS YOU.
NEVERTHELESS...........BE PREPARED. ENJOY.
3 people found this helpful

Amazon CustomerReviewed in the United States on August 24, 2021
2.0 out of 5 stars
"Potentially Good Story Ruined by Bad Ending"
Verified purchase
This genre is well known and can actually produce a good film, albeit with a nasty ambiance and subject. We've see the Hostel and Saw flicks, Wrong Turn, etc. they're well written and have a good story line, as well as the eventual triumph of good over evil. Not this movie! I did love the subliminal (or accidental?) message they sent that both cars that broke down were US crap made in Detroit, LOL. The first is a hapless couple and the guy gets butchered, his lovely wife becomes a breeder. Then we get the 2 bickering couples, 2 of whom cheat with each other's partner. At least these movies usually have hot women getting naked at some point. This film didn't have that, bummer. The 2 girls were hot, especially the one in the painted on bib overalls and red high top sneakers, she was a curvaceous, bouncy young thing. But as far as seeing any more of her, it was just a tease.. Typical in all the violent movies, the victims always make the stupidest mistakes conceivable and manage to snatch death and mutilation from the jaws of escape and victory or revenge. This film was no exception. Bad guy makes a very difficult shot with an old West model revolver, from a distance and through a truck window so filthy he couldn't possibly have seen through it. Ridiculous amount of shark jumping here. I have no idea why such a high % of viewers gave this garbage 5 stars, it's mind boggling. I can't decide who's stupider, them for their extremely low cinematic bar, or me for watching. Anyway, save your 90 minutes and watch a better movie of this genre, where evil doesn't win.
One person found this helpful

Amazon CustomerReviewed in the United States on July 23, 2021
1.0 out of 5 stars
Predictable
Verified purchase
Hey director of stupid horror movie. You DO realize that I knew from the very beginning that nobody would survive, right? Because nobody in modern horror movies survives. Therefore there is no suspense. You don't think you're the first person to make a movie like this, are you? You are just like all the rest, follow the fad...
3 people found this helpful
See all reviews
Back to top
Get to Know Us
Make Money with Us
Amazon Payment Products
Let Us Help You
EnglishChoose a language for shopping. United StatesChoose a country/region for shopping.
© 1996-2021, Amazon.com, Inc. or its affiliates