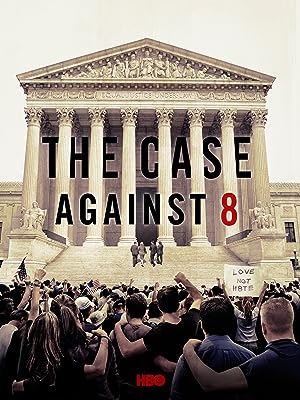 Rentals include 30 days to start watching this video and 24 hours to finish once started.
Add to
Watchlist
By ordering or viewing, you agree to our Terms. Sold by Amazon.com Services LLC.
Write review

Karl WeaverReviewed in the United States on January 15, 2016
5.0 out of 5 stars
Well-Done Documentary centered on the actual plaintiffs
Verified purchase
The Case Against 8 HBO Documentary Films 2015 DVD not rated

I wasn’t sure if I was going to like this movie or even finish it. It is about the legal challenge to “Proposition 8” in California, a proposition that prohibited same-sex marriages with the simple statement that marriage was defined as legal union between one man and one woman. [Well it was something along those lines].

I felt a vague sense of discomfort that it was going to be a militantly pro-gay movie. “Not that there’s anything WRONG with that”, as “Seinfeld” proclaimed. But…being definitely heterosexual, when I’m forced to uh….view…uh…public homoerotic “making out”, I grow tired quickly. Heck we all know conservative people that don’t even approve of HETERO sexual public intimacy, right?

I’m pleased to say it was not at all like that. Yes, there were two same-sex couples who agreed to be plaintiffs against the proposition. Their legal proposition was that it was unconstitutional by violating their right to equal treatment and to due process under the law…
Most bizarrely, they and a coalition supporting them were able to attract two extremely competent lawyers with experience arguing cases in the U.S. Supreme Court, who came from complete opposite ends of the political spectrum. Reality trumps fiction again: it’s David Bois and Ted Olson…yes…the lawyers for Gore and for Bush respectively, who argued Bush v Gore in the USSC regarding the 2000 election. I would love to rattle on as to why these two lawyers agreed to work the same case, the reaction from the gay and liberal communities, the legal meanderings of this case, the family situations of the plaintiff couples, the opposing legal team, and so on, but why spoil the film?
The case did have a meandering history: Federal District Court, 9th District Court of Appeals, over to the California Supreme Court, back to 9th Circuit Court and then on to the US Supreme Court, which bundled it together with a challenge to the Federal “Defense of Marriage Act”. In its decision on the two cases the USSC struck down the Defense of Marriage Act on the grounds pled here: due process and equal protection. It decided plaintiffs did not have jurisdiction in the appeal on Proposition 8, which left standing the lower court’s decision that it too was unconstitutional.

The US Supreme Court in the last twenty plus years has been a very conservative supreme court [though admittedly, it is the most conservative in defending the rights of the poor downtrodden corporation against individuals and has been somewhat more protective of individual rights against the state]. So it’s worth taking note of why this conservative court made what was a somewhat bold “liberal” decision. This movie explains how, and why. Very well done. A-.

Christine FugateReviewed in the United States on December 12, 2019
5.0 out of 5 stars
A Top Ten Doc!
Verified purchase
This movie is so well done that I use it when teaching documentaries. The editing is masterful and creates suspense from a story that we think know. There is also a wonderful cast of characters. Must see TV!

yochevedReviewed in the United States on December 29, 2015
5.0 out of 5 stars
The case against 8
Verified purchase
well made. story well written and edited. lovely music. brought to the light the importance of the constitution and all that it takes to preserve it so that people are not discriminated against and religion doesn't rule the USA. the joining of "opposing" sides, and the intelligence of everyone who fought this battle, shows us what united together can produce.

MerrickMReviewed in the United States on May 27, 2015
5.0 out of 5 stars
Long Live Love
Verified purchase
AMAZING story of how we both failed in 2008 and continue to succeed moving forward. Watch this with your kids so they can enjoy a major civil rights issue in real time.

Reviewer 9Reviewed in the United States on March 3, 2017
5.0 out of 5 stars
Five Stars
Verified purchase
LOVE THIS FILM
See all reviews
Back to top
Get to Know Us
Make Money with Us
Amazon Payment Products
Let Us Help You
EnglishChoose a language for shopping. United StatesChoose a country/region for shopping.
© 1996-2022, Amazon.com, Inc. or its affiliates