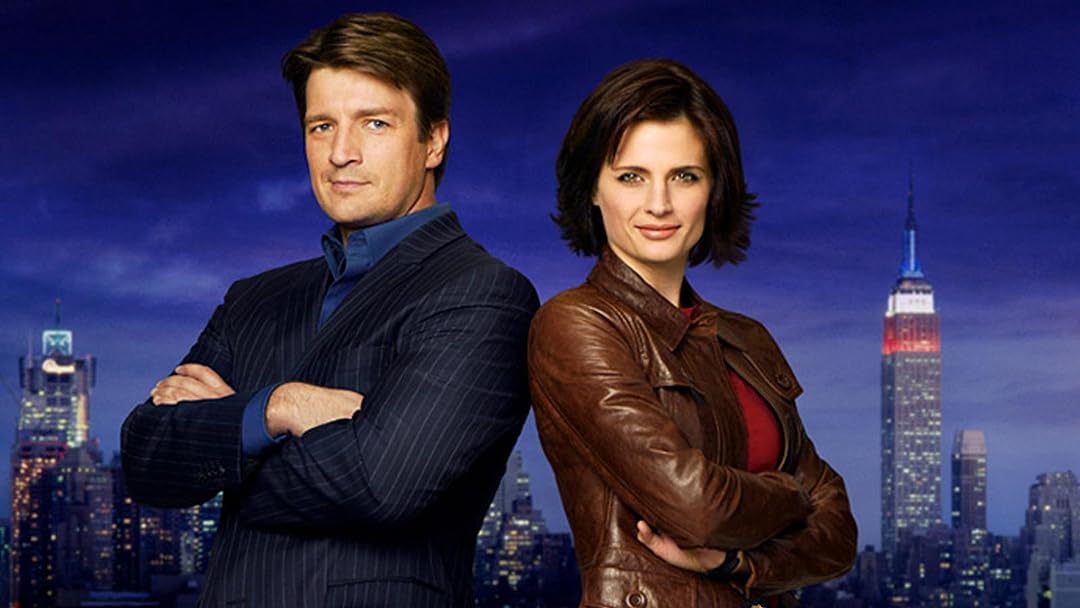 (4,768)
8.12009X-RayNR
Rick Castle is one of the world's most successful crime authors. But when his rock star lifestyle isn't enough, this bad boy goes looking for new trouble - and finds it working with smart, beautiful Detective Kate Beckett.Inspired by her professional record and intrigued by her buttoned-up personality, Castle's found the model for his bold new character - whether she likes it or not. Now with the mayor's permission, Castle's on her case and in her way. Kate's initial disdain for Castle turns to grudging respect as he quickly proves that a background in plotting murders can be a valuable asset in catching killers. As they solve a new crime together each week, they're partnership grows - as does their love-hate relationship. These two may not always see eye to eye, but together they might just write a whole new chapter in crime solving.

BKWReviewed in the United States on August 11, 2016
5.0 out of 5 stars
I can't get enough of this show
Verified purchase
I got hooked on this show a few months ago. Kind of goofy, but still a good crime drama with romantic tension in the air. What more can you ask?

I tend to be a TV snob, watching mostly documentaries and movies that have some artistic or social quality. That doesn't mean I'm too good for some basic, fun to watch entertainment, and this does the job. Castle's character is a successful millionaire, but just goofy and vulnerable enough, plus ok looking but not over the top good looking to keep him from seeming somewhat believable. Beckett's character is so good looking, confident, and successful that it's hard to imagine her ever seeing anything in Castle, but the chemistry is undeniable and they use that to tease the viewer into coming back episode after episode and season after season.

The plots are, for the most part, original and refreshing, but far enough from reality that you have to just go along and stop reminding yourself that these things would never happen in real life and that nobody would survive the predicaments that confront the characters on each episode. I am former law enforcement and know that none of the things on this should would ever happen, but again ... I don't care. Sometimes you just need to escape reality for an hour or two.

One of the real surprises for me has been Susan Sullivan. After watching her as the uptight Kitty Montgomery on Dharma and Greg, I couldn't have imagined her playing any other character. In Castle, she plays Martha - Castle’s whacky mother, who is an over-the-top, past her prime actress, with a multitude of character flaws, but who is nonetheless lovable.

GraceReviewed in the United States on February 27, 2022
1.0 out of 5 stars
WARNING: These DVDs Can Freeze Your DVD Player!
Verified purchase
Episode 1 and 2 are what I really wanted from this DVD set; holy mackerel sapphire score on Pink for the Episode 2 score! Neato! But Disc 1 only played through Chapter 4 of Episode 1, and then froze the player. Nothing worked except turning off the DVR, waiting the 2 minutes, and immediately after power on, eject the disc. Disc 2 did work, but rubbed the player the wrong way, causing clunking and grinding so loud, seemed the player would walk its way off the shelf. Disc 3 was fine. Whaddya expect for $5? So cutting the losses and moving on, bought Amazon Video streaming Episode 1 and 2. Digital fell short as well, because no commentary is included with Amazon's streaming versions. And I really wanted to hear the Episode 1 commentary on how they built the world of Castle. Oh well. People in Hell want ice water, and people in Ukraine want Putin to stop his stupid bloody conquest of their country. Far be it from me to complain about a DVD set in which I wanted to escape, but we'll just call this the VD Company, and warn people away from it. If you have a friend with Castle Season 1 on DVD, grab a mask and a gift and watch the commentary and extras with that friend. Everybody Needs Somebody Good.
One person found this helpful

Jane EyreReviewed in the United States on October 30, 2017
5.0 out of 5 stars
Castle Season1
Verified purchase
I enjoyed Castle, as a detective mystery series and gentle romance. The banter reminds me of old time movies. Each story episode is unique. Premise is a bit far-fetched, but the detecting is adventurous and plausible. The premise is an author of popular novels is given a favor by his fan, the mayor, and gets permission to tag along with the police department, ostensibly to get more material for a new novel series. I think the only thing I didn't enjoy was the overbearing hammy wannabe actress mother, kind of a thin "Auntie Mame" type who lives with the author. Her character adds nothing to the stories. Meant as comic relief, I guess. Overall, one of the best tv shows for the time. Fast paced, interesting soundtrack music different for each show, and nicely edited. My favorite characters were the two supporting detectives and their banter. I didn't know of Nathan Fillion before this show. He plays a handsome man about town smitten with the female detective. He's gallant, charming, Richie rich and likes to help, and often is surprisingly helpful. It's fun, not too grotesque, not too mushy, and paced well.
6 people found this helpful

R. JeffordsReviewed in the United States on May 3, 2019
1.0 out of 5 stars
Rip Off By Amazon Fire
Verified purchase
I set a PIN to prevent being charged for movies and tv shows when I didn't want to order them. Although I set the PIN on the main account, the Fire devices want you to specifically list them under the settings tab. Also, if you choose the PIN setting on a Fire device, you MUST have Parental Controls on which means I have to put a PIN in every time I choose a show to watch EVEN when using a non-Amazon APP on the Firestick. It is very easy to get charged as there is no confirmation before ordering that tells you that you are going to be charged. If you are not looking closely at the screen, you just might end up ordering a TV show that you don't want to pay for and is definitely NOT worth paying to access the show.
4 people found this helpful

Doc SavageReviewed in the United States on June 13, 2021
5.0 out of 5 stars
Great show and really miss it!
Verified purchase
After watching the first season again I remember why I loved this show when I first seen it! I can't remember if I got to see it when it was showing or later streaming. The characters played out well and I remember how each season was a big mystery behind the scenes with the murder of Beckett's mother. That was the clincher in this series. If you like detective shows this is a must have! DVD's have been flawless with no apparent problems when viewing. Owned the Second Season, but seems like some seasons in the series is missing.

DanAnnieReviewed in the United States on February 11, 2015
5.0 out of 5 stars
I've become a Castle addict... have already streamed several seasons
Verified purchase
Hi, my name is Ann and I'm a "Castle" addict.

I'm not sure how this television series has been running since 2009 and I had not even watched one episode. It is fantastic!

How addicted am I? Throughout my day I will ask myself... "Is there enough time to watch an episode before I have to do 'such-and-such'?"!!

"Castle" is a crime solving series that has intrigue, romance and humor. The story-line revolves around a beautiful police detective (Kate Beckett - Stana Katic)) who is tasked with solving murders in New York City and a handsome, rich and well connected murder/mystery novelist (Richard Castle - Nathan Fillion). The pilot connects these two over a series of deaths that mimic murders in some of the writer's novels. Castle is brought on to "consult" in that investigation and then ingratiates himself into a semi-permanent position as a consultant to Beckett because he's friends with the NY mayor. The show has great writers; it's difficult to predict the outcome of each episode! It keeps you guessing... and laughing!
6 people found this helpful

Joanna MReviewed in the United States on January 29, 2014
5.0 out of 5 stars
Not just another crime procedural...
Verified purchase
A best-selling author and an NYPD detective team up to solve difficult crimes, utilizing their very different personalities and backgrounds -- simultaneously creating an appealing show that packs everything from mystery to light-hearted humor.

Despite her initial reluctance, Det. Kate Beckett (Stana Katic) finds herself tailed on the job by Richard Castle (Nathan Fillion), a famous crime novelist (the fictitious equivalent of Stephen King), thanks to his pulling strings in the mayor's office. While Castle initially claims he's there to glean ideas and inspiration for his new series -- about a female detective named Nikki Heat, who is based on Beckett -- it's also clear that Castle loves the "whodunnit" angle of solving real-life cases.

In addition, it quickly becomes clear that Castle is attracted to Beckett, a pretty and intelligent yet tough and no-nonsense cop. The writer and researcher in Castle almost immediately appraises Beckett, concluding that someone so smart and good-looking could've been anything she wanted, so there must be a specific reason for her choosing to join the police force. Castle's suspicions are fast affirmed, but it's also apparent that Beckett's past is too painful for her to discuss. Nonetheless, that's hardly a deterrent for someone like Castle, who only thinks it makes Beckett all the more intriguing.

Although Season 1 only has 9 episodes, it's a great way to become introduced to this quickly addicting series! If you enjoy mysteries, a bit of flirtation and a frequently sprinkling of witty banter and humor, definitely give Castle a try!
2 people found this helpful
See all reviews
Back to top
Get to Know Us
Make Money with Us
Amazon Payment Products
Let Us Help You
EnglishChoose a language for shopping. United StatesChoose a country/region for shopping.
© 1996-2022, Amazon.com, Inc. or its affiliates