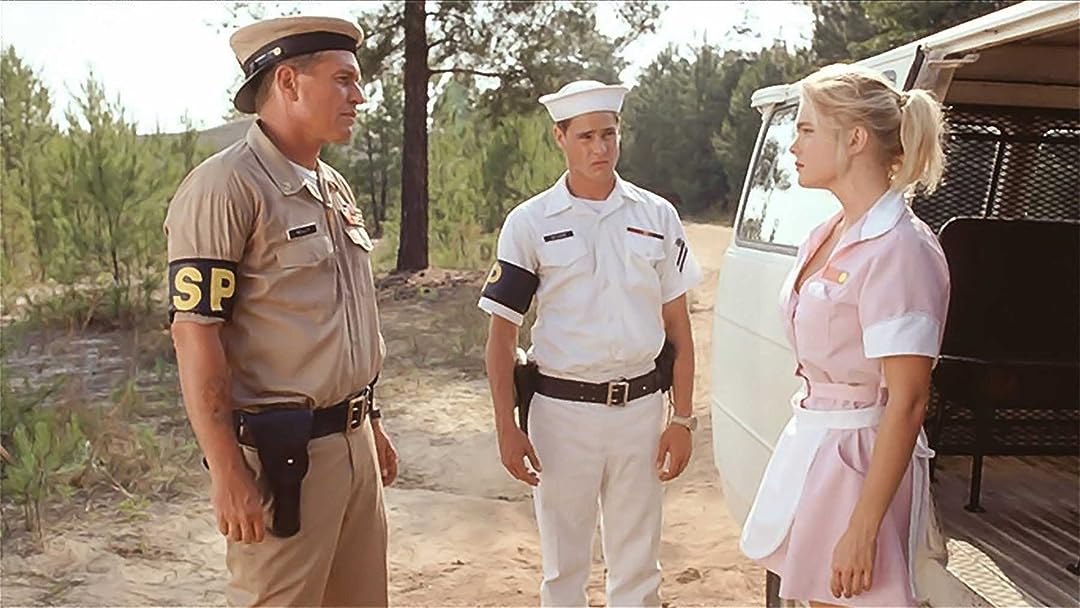 (210)
1 h 41 min1994R
A hapless Navy grunt is assigned SP duty. The catch: he must escort a beautiful female prisoner on her way to prison for going UA. She in turn will try anything to escape.

Amazon CustomerReviewed in the United States on April 21, 2021
4.0 out of 5 stars
Funny movie, but the movie producers are not to familiar or accurate on Navy ranks and insignia
Verified purchase
It was a funny movie, but the movie producers are not familiar with Navy ranks or ratings. For one thing, it seems almost everyone in the Naval warehouse (including the cubicles in the office space) were E1, E2, or E3 (Seaman Recruit, Seaman Apprentice, Seaman). No petty officers shown except a chief petty office and master chief petty officer. I find that odd and inaccurate in a real Navy setting. There should be plenty of 3rd Class, 2nd Class, and 1st Class petty officers working in that warehouse environment. i also noticed by the rating badges that everyone shown was a Quartermaster. In a warehouse environment you'd expect to see at least Storekeepers present. In one scene the prisoner was referred to as a Seaman 2nd Class. There are no Seaman 2nd Class ranks. There is a Seama rank (E3), and a 2nd Class petty officer rank (E5), but no Seaman 2nd Class. If the person was a Quartermaster 2nd Class, they'd be referred to as QM2, or Quartermaster 2nd Class. Other than the inaccuracies of the Navy rank and ratings, and the fact that the majority of the workers in the warehouse (including the two shore patrolmen) were Seaman (E3) and below, I found the movie entertaining.
One person found this helpful

John PoweReviewed in the United States on June 29, 2020
3.0 out of 5 stars
Poor man's Last Detail
Verified purchase
Actually a pretty decent movie, kind of a rip-off of Last Detail, but really not bad. Tom Berenger is a pretty decent portrayal of an old school CPO. The Seaman deuce is not very likable or believable. A fast dealer like him should of been at least a 3rd or 2nd class P. O. The super hot girl not really believable as the prisoner, but it just a movie. Any relationship between this and the real Navy is just nuts, but still it just a movie.
3 people found this helpful

Amazon CustomerReviewed in the United States on February 4, 2017
5.0 out of 5 stars
Interesting pleasant personalities in a movie that you don't believe for one second
Verified purchase
By odd coincidence the only two times I was this movie is when is twice (a few years between both viewing) when I stayed in a hotel in White Settlement, TX rather than drive all the way back home to Plano, TX during drill weekends. It was the only thing on the hotel channels that was interesting.

As far as the movie itself, it wasn't meant to be a believable story but meant to be a showcase for some quirky pleasant personalities interacting in a movie and it does a good job at that.

I've read a few other reviews and they said the movie was filmed in South Carolina. I was in the military for a year in the area and didn't notice that it was in South Carolina, not like that movie in downtown Chicago (The Fugitive) where I lived as a small kid and still recognized it decades later. Of course though I can count the times I was left off base (and not get punished for it) with one hand.

Average Joe 51373.1Reviewed in the United States on January 23, 2015
3.0 out of 5 stars
80's cheeseball, but not bad.
Verified purchase
When a shady, cocky Navy boy on his last day before discharge gets assigned to a prisoner transfer, he gets more than he ever thought he would. First when he meets his grizzled, tougher than leather partner, who apparently hates him. But both of them get upended when they pick up their prisoner and it turns out to be a beautiful young woman. And she immediately wraps them around her finger, especially the younger of the two, who is obviously infatuated with the prettiest Marine he's ever met. What follows is a comedic adventure that includes repeated escape attempts and a blossoming romance. It's got a bit of cheese, but should keep movie fans entertained. It's not the best movie ever made, mind you, but is decent entertainment. Stars William McNamara, Erika Eleniak, Tom Berenger, Crispin Glover and Gary Busey. Definitely a 'guys night' movie. A bit of swearing and nudity as well as a fight scene.
4 people found this helpful

David E. BaldwinReviewed in the United States on May 9, 2015
2.0 out of 5 stars
The Least Detail
Verified purchase
This alleged comedy about two shore patrolmen (Tom Berenger and William McNamara) escorting a sexy ensign (Erika Eleniak) for transport to the brig elicits a collective yawn. The film is mundane to the extreme in both character development and plotting with the only reason to watch is the obligatory nude scene by Eleniak. This is surprising because the film was helmed by Dennis Hopper who does offer an amusing cameo as a lingerie salesman. I can't imagine Hopper's much maligned "The Last Movie" (unavailable on DVD) being this dreary and uninteresting. The type of movie that would put the pharmaceutical company that manufactures Ambien out of business.
3 people found this helpful

Amazon CustomerReviewed in the United States on June 29, 2021
2.0 out of 5 stars
ok fun
Verified purchase
Need a better consultant Many errors Navy issues non-rated sailors do not stand SP, E4 and above a marine would not talk back to a Navy chief
One person found this helpful

Allan HamiltonReviewed in the United States on February 12, 2021
5.0 out of 5 stars
Fun to watch
Verified purchase
I enjoyed this movie quite a bit. Especially the banter between Tom Berenger and William McNamara. It was funny. Then you throw in Erika Elniak and it was enjoyable to watch.
See all reviews
Back to top
Get to Know Us
Make Money with Us
Amazon Payment Products
Let Us Help You
EnglishChoose a language for shopping. United StatesChoose a country/region for shopping.
© 1996-2022, Amazon.com, Inc. or its affiliates