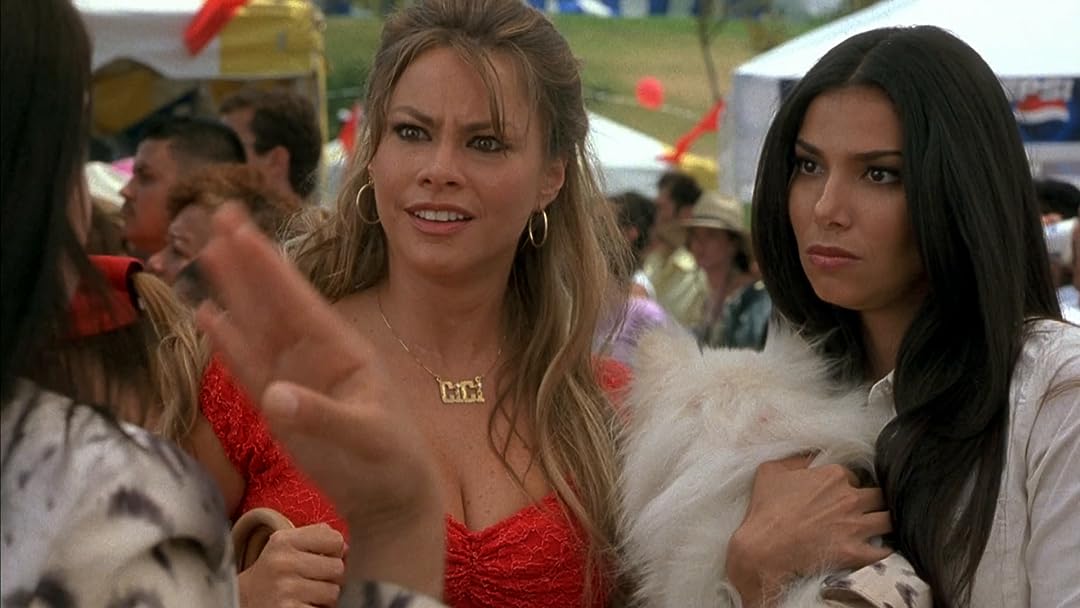 (326)
4.71 h 20 min2003PG
HD. A Latino Casanova courts three Hispanic women in three different cities...until they find out about one another in this comedy.

LaraReviewed in the United States on September 10, 2007
5.0 out of 5 stars
Aye Papi!
Verified purchase
This movie is extremely funny. It's a wonderful romantic-comedy.
It's pretty simple which makes it such a lovable movie. It involves 3 women living in different areas of the US (Miami, Chicago, and the other in New York). The love interest of all three of these women, is Tomas, a business man who travels to each of his ladies because he can't choose just one. All three chicas travel to Tomas' house in California. Tomas himself is already becoming stressed out by having 3 relationships at once and is afraid of any of them meeting each other. Well let's just say his worst nightmare (besides La Llorona getting him) comes true and he is shocked as well are the women.

That's just the beginning, the rest is hilarious with some fun action scenes.
This is a great DVD to add to your collection because you can watch it over and over and not get tired of it!

**Also Nicole Scherzinger, from the Pussycat Dolls, makes a small cameo in this movie as "Miss Puerto Rico".

Beantown JimReviewed in the United States on November 3, 2013
4.0 out of 5 stars
Chasing Papi: Consider him caught
Verified purchase
The movie is a delightful romp in the tradition of the 1960's and the romantic comedies. This is almost identical to 1,000 films where a lothario/giggolo has a skein of women pawing at him. The difference is the Latin flavor. If you know what 'La Tremenda' is or watch Gigantic Saturday, you will love this film. For Anglos, it's still pretty good, but doesn't translate perfectly.
The male lead is handsome as expected; the three women pursuing him range from homely, beautiful in the full-figured realm, and finally beautiful in the Hollywood/fashion model slim mode.
Three women, competitive to a point, then colluding in putting this Romeo in his place for promising devotion and love...to three different ladies, if not many more.

Thomas M. SiposReviewed in the United States on November 30, 2006
3.0 out of 5 stars
Decent film, pretty ladies, but obvious and sometimes dull
Verified purchase
CHASING PAPI has good and bad points. It puts cartoons and music to effective use, and there's some funny satire.

Of course, as others have commented, the big plus is its beautiful ladies. Men may enjoy discussing which of the three women Papi should have chosen. Roselyn Sanchez is my personal favorite.

But at least for me, this film got boring. Perhaps because there wasn't much substance to it. When I felt I was an hour into the film, I checked the timer and saw that only 38 minutes had gone by. The film is only about 75 minutes long (not including credits) but it felt much longer.

The jokes are tame. Those who prefer MONTY PYTON or SOUTH PARK may not find CHASING PAPI too funny.

CHASING PAPI feels like an "official latin film," in that the filmmaker felt the need to pass along some messages about latinos. For instance, Cici is constantly harping on how Patricia is "ashamed to be a Latina" because of her "fake eyes" (i.e., colored contact lens). But this makes no sense, because Cici appears to dye her hair blond. Sure, some latinas have blond hair, but some also have blue eyes. What's the big deal?

For that matter, Cici's latin accent seems overdone. I know she's latin, but she also speaks English well. Yet in her role, she occassionally slips into a pronounced latin accent. And because it's only occassional, it seems unnatural to her character; as an affectation done to remind the viewer that Cici is latin.

The dialogue as a whole is obvious and not too funny. A collection of ethnic observations, feminist statements, and repetative snipes at each
other.

Even so, the film is fluffy and well-intentioned. The women are pretty and likeable. I was also pleased that Tomas was not villainized. When I read the description, I worried that I was in for some feminist male-bashing, but that proved not to be the case.

It's a sometimes enjoyable film, although not edgy "laugh out loud" comedy.
9 people found this helpful

Javier LopezReviewed in the United States on May 4, 2004
3.0 out of 5 stars
Interesting but not good.
Verified purchase
I'm glad that the Latin market is growing fast and strong and I was thilled when I heard about this movie.
So when it came out I bought it and found it interesting (you wouldn't get board with it) but I felt that it was made to be successful. I mean that because it's "so good and funny" that you feel that "look for success" vibe.
About the cast I can say that Sofia Vergara isn't just a pretty face and body, she does it very good. Jaci Velasquez shows that besides having a beautiful voice she can also act good. Roselyn Sanchez is also very good. Finally about Eduardo Versategui I think that he was chosen because of his looks because he doesn't work good at all and I think that maybe because of that he sleeps during almost the whole movie.
The story is about a guy (Verastegui) who has 3 women. One in Miami (Vergara), another in New York (Velasquez) and the other in Chicago (Sanchez). Because of his job he spends time in the 3 cities and his home in Los Angeles. Any of the girls know that they are not the only one. But one day they all decide to go to his house in Los Angeles because they heard in a Walter Mercado show (a very famous latin psychic) that women should be alert because their husbands or boyfriends could cheat on them.
So at his house the find out the whole story but they can't do something about it at that time because the love of their lifes is sleeping because he took some sleeping pills because of his stress with the three of them.
The story has a twist when a police woman starts to chase them because she thinks that they're delinquents.
The movie didn't have a lot of success but it's ok, funny and all that but not good.
6 people found this helpful

Arturo ReveloReviewed in the United States on November 19, 2012
5.0 out of 5 stars
Three beautiful women and fun trip
Verified purchase
Perhaps this is not the best movie of the century, or one of the ten best ever, if you want substance see Oliver Stone or Orson Wells, but if you want to delight yourself by looking at some beautiful latin talent, this is the place. From the decent direction, to the musical score, and then how can you go wrong with Sofia Vergara. Please, the woman is a godess! The other two ladies are nice two, but to close to my daughters age, so I stick to my age group, and watch this movie time and time again to put a smile in my face. Bravo!!!

Benny KatzReviewed in the United States on July 3, 2013
4.0 out of 5 stars
I saw a segment from this...
Verified purchase
...when I was staying at a hotel in L.A. I thought it was pretty sexy! I tried to find it in stores while I was there (my room came with a DVD player. Considering the large Latino community I was staying in, I thought it would be easy to track down a copy of it! No such luck. I finally caught the whole movie on cable. The plot is a little thin but the Latinas in this flick are hot! Roselyn Sanchez and Sofia Vergara could melt butter by just entering a room! They should look even better in hi-def!
One person found this helpful

CookiedulceReviewed in the United States on April 21, 2011
5.0 out of 5 stars
HILARIOUS!
Verified purchase
If you are a hispanic woman you will DEFINITELY relate to this.
I felt right at home watching this movie. Jackie is superb. I wonder why she hasnt made any more movies after this.

A man, b/c of business, travels a lot and has a relationship with 3 women in different states.
When the women find out its a race to see who can catch him and force him to make a choice.
The hilarity of all the trouble they get into and how they grow as a result makes this movie a five star for me.
2 people found this helpful

B. G.Reviewed in the United States on November 1, 2005
5.0 out of 5 stars
I love this movie!
Verified purchase
Honestly, this is just a good movie to be enjoyed on a rainy day or with a girlfriend/boyfriend. It's not supposed to be a great genre-defining movie, it's just supposed to be FUN. The three leading ladies play their parts exactly the way they are meant to be played. Cici (Sofia Vergara) is the bombshell, Lorena (Roselyn Sanchez) is the strong intelligent woman, and Patricia (Jaci Velasquez) plays the rich girl. They have great chemistry on-screen and their rivalry is played very well. It accomplishes exactly what it sets out to do: have fun, and I can't believe people are trashing it for that.
14 people found this helpful
See all reviews
Back to top
Get to Know Us
Make Money with Us
Amazon Payment Products
Let Us Help You
EnglishChoose a language for shopping. United StatesChoose a country/region for shopping.
© 1996-2022, Amazon.com, Inc. or its affiliates