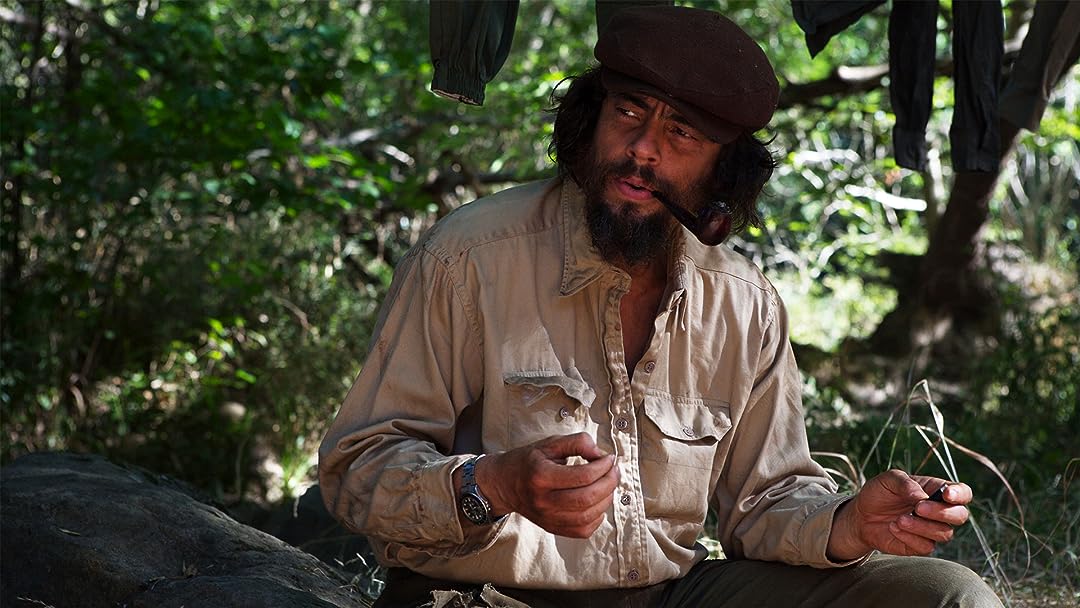 (201)
6.92 h 15 min200818+
In this tale of sacrifice and idealism, Che Guevara (Benicio Del Toro), following his successes in Cuba, travels to Bolivia to jumpstart an offshoot of the Revolution.

It lays out all the reasons why an insurgency would collapse. There’s the wrong environment, the lack of popular support, the fact that the guerillas were seen as foreigners, the government making a quick response, and finally foreign intervention.

The movie continues to champion Che like the first one. It doesn’t explain why he left Cuba for Bolivia however, which was the fact that Che believed in revolution but wasn’t interested in running a country afterward. Finally, Benicio del Toro lays down another excellent performance as he did in the first film.
C

R. L. HuffReviewed in the United States on November 24, 2012
4.0 out of 5 stars
Uneven but noble effort
Verified purchase
Soderbergh's effort is inspired but somewhat displaced. His approach - to focus on selected aspects of Che's guerrilla career, at the beginning and end thereof - has its merits. The time limits of filmmaking require one to get at the heart of one's subject quickly and not crowd too much into a film narrative. Yet Soderbergh has ironically done that by drawing his production out into four hours.

To be fair one should see this as two films, a "Che I" and "Che 2" as a sequel. The second, like most sequels, doesn't measure up to the first and turns into an endurance test on the part of the viewer - though this may be intended, to emphasize the futility and desperation that enclosed Che in Bolivia. Perhaps he even welcomed the end of this campaign, as one welcomes its end on screen. Depicting his "Waterloo" serves also as epitaph for 1960s guerrilla romanticism.

A better complement to "I" would have devoted perhaps a half hour to Bolivia. Che was not the most outstanding of guerrilla warriors in Cuba or Latin America, and there were other aspects to Che's life besides combat. A look at his time as commander of La Cabana Fortress, overseeing the Revolutionary Tribunals; or pushing a hard line during the Missile Crisis; or portraying the origin of that iconic photograph, at the mass funeral of counter-revolutionary terrorist victims, would have more engaged the general viewer and done more justice to his legacy. Mention also of his trials and tribulations in Africa, as another reviewer suggests, would also have been appropriate.

Still, Soderbergh has done a better job than mainstream Hollywood ever could have, had it even deigned to touch the subject. Only Soderbergh's own radical edge could do this project any justice at all, and that we must give him.
4 people found this helpful

DanReviewed in the United States on September 18, 2020
5.0 out of 5 stars
Solid historical drama
Verified purchase
A great historical drama, I’m reading Che by Jon Lee Anderson. For a movie, the do better than most at trying to hit the highlights in the time they have.
2 people found this helpful

Shannon FindlayReviewed in the United States on October 12, 2021
5.0 out of 5 stars
Well Done
Verified purchase
Great direction and acting.
One person found this helpful

Sojourner Speaking the TruthReviewed in the United States on July 4, 2021
5.0 out of 5 stars
Things you don't learn in history classes in the US
Verified purchase
Very informative
One person found this helpful

smegglesReviewed in the United States on January 10, 2022
1.0 out of 5 stars
Goebbels would've been proud
Verified purchase
This is an exquisite piece of propaganda.
One person found this helpful

''The Butcher''Reviewed in the United States on November 27, 2016
5.0 out of 5 stars
Movie time.
Verified purchase
Used, but in very good condition.
See all reviews
Back to top
Get to Know Us
Make Money with Us
Amazon Payment Products
Let Us Help You
EnglishChoose a language for shopping. United StatesChoose a country/region for shopping.
© 1996-2022, Amazon.com, Inc. or its affiliates