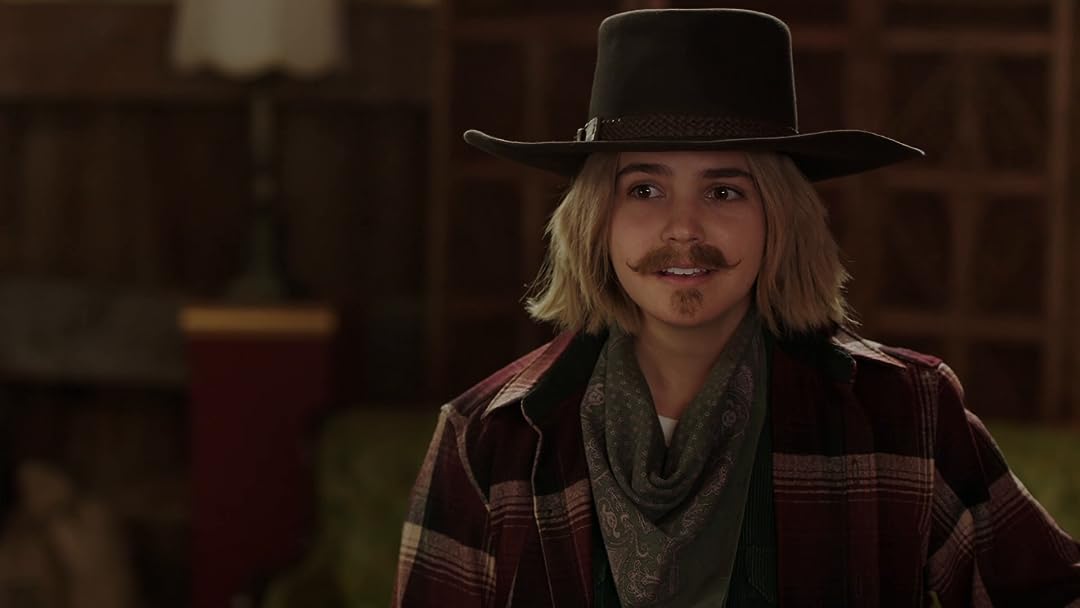 (777)
5.31 h 40 min2021PG
Finley is determined to land a role in a Hollywood production, but a botched audition forces her to disguise herself as a cowboy. Bonus Content included.

Jerry L. CookReviewed in the United States on August 27, 2021
1.0 out of 5 stars
Don't judge this movie by its trailer
Verified purchase
My role as hubbie in the house is to find a cheesy, predictable, yet heart-warming AND "clean" movie for my wife. The trailer did what it should--it got us to click the "rent" option immediately. And yes, we are playing the victim card (albeit poorly, I might add. I mean, seriously, how hard would it be to Google parent reviews for this movie?) Language was a bit more than expected, but the sexual innuendos were not expected at all. We were expecting a low-grade PG-type movie that would be appropriate for the whole family. A girl dressed up as a boy kissing her step-sister, dance hall girl dancing, and some other scenes were not expected, based on this trailer. Yes, we should have known better. Yes, we may be more conservative or strict or "goody goody" than some, but this movie did not work for us.
8 people found this helpful

betpReviewed in the United States on January 20, 2022
1.0 out of 5 stars
Didn't like it, please don't watch it, I don't want to give them the satisfaction
Verified purchase
I have seen plenty of bad movies in my life, most of them parts of the "A Cinderella Story" franchise, and I can usually laugh along. I can usually see what they're trying to do and take it for what it is.

This one is beyond the pale. The motivation makes no sense - the main character is a grown person and it's never established why she's beholden to her stepfamily.

This movie is a musical, and there are shockingly few songs in it. The main character only sings two songs, and both of them end with meta jokes where another character comments on the fact that she's singing - which was a mistake on the director's part, because it implies that this girl is singing whole numbers in real life, complete with choreo. This is relatable, but wholly inadvertently. You can tell it's supposed to be non-diagetic.

It's also very cringey and not fun to watch at all. WAY too indulgent towards side characters ad-libbing. And there's not a single character in the film with a normal name. What happened to like, Brenda? Sarah? Ryan? The "Cinderella" character is named "Finley." Her stepbrother is named "Kale." Like, not to be That Guy, but name trends right now are perplexing and ugly. Sorry.

The actress carried her role as best as she could, and she's cute as a button. And the main love interest did a good job being the flawless, personalityless handsome man. And kudos to the filmmakers for casting a man of color. His race isn't relevant to the plot. He's just a charismatic biracial guy. Honestly, the only parts I enjoyed were the scenes with him in them. I'm not being complimentary when I call him flawless, by the way. The character literally has no flaws. He doesn't grow or change in the story. He starts out kind and wanting to own a farm (?) and he finishes kind and wanting to own a farm. You could remove his character and replace him with a cardboard cutout and the movie would genuinely be exactly the same.

The characters are unlikable, the music is forgettable, the plot is confusing and frustrating, and the movie ends abruptly and unsatisfyingly. I will often give movies in this franchise a rewatch even though I know they're bad, because it's a fun little niche. But I was furious after watching this one lol. FULLY do not recommend.

Alyssa ThomasReviewed in the United States on July 7, 2021
1.0 out of 5 stars
Junk. Don’t waste your money
Verified purchase
Badly written. Love Michael Behling and his acting but this movie is just so cliche and it’s not even a good cliche.
Even the story line was bad and the characters. Good lord. I get they are trying to be “with the times” but the original story said TWO evil step sisters not a sister and a ✨sIsTEr✨ I was very disappointed
6 people found this helpful

The Mighty PenReviewed in the United States on July 27, 2021
3.0 out of 5 stars
Not your typical Cinderella story
Verified purchase
This is an entirely new take on a classic. I'm not quite sure how I feel about it. Love several actors in this and it was different than your typical Cinderella story but didn't like all the changes. Replacing the fairy godmother with a pig was a little too much for me but considering the tone of the entire movie, it fit. Loved that instead of having two stepsisters, it was a stepsister and stepbrother. Interesting that the story was set around a movie production shooting on a farm instead of your typical ball or fancy party. As a fan of Michael Evans Behling from All American, I was impressed by his authentic sounding southern accent and as always, he delivered on his acting. Bailee Madison was adorable playing her three characters. And Richard Harmon, playing a totally different character than Murphy from The 100, nailed is role.
2 people found this helpful

SamReviewed in the United States on August 14, 2021
5.0 out of 5 stars
A little cheesy but still cute.
Verified purchase
I watched this movie because my all time favorite actor is in it. That was my only draw, I am not a country Belle but I still found myself finding the cheesy antics cute enough. Lots of Disney chick flick vibes coming from this one, so it is safe for all ages (in my opinion)
One person found this helpful

RockwellReviewed in the United States on September 21, 2021
5.0 out of 5 stars
Loved it
Verified purchase
I absolutely loved this Cinderella retelling! It was fun, hilarious and sweet! Kind of cheesy but who cares? I also loved how it took place on a farm because I could definitely relate and the pig oh the pig was awesome lol. If your looking for a family movie this would be my recommendation especially if you have kids that love animals.

KatrinaReviewed in the United States on September 11, 2021
5.0 out of 5 stars
Cute family movie
Verified purchase
This is a really cute family move I enjoy it as an adult and the rest of my family also enjoyed it.

michelle warnerReviewed in the United States on December 26, 2021
5.0 out of 5 stars
Great watch
Verified purchase
Wonderful Bailey. She is great in all her productions.
See all reviews
Back to top
Get to Know Us
Make Money with Us
Amazon Payment Products
Let Us Help You
EnglishChoose a language for shopping. United StatesChoose a country/region for shopping.
© 1996-2022, Amazon.com, Inc. or its affiliates