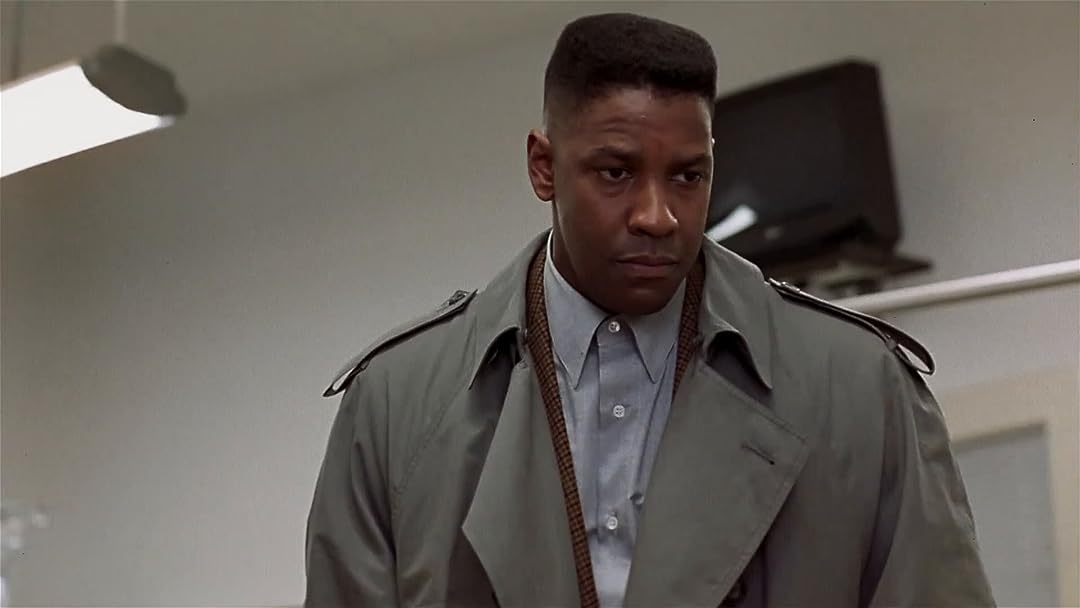 (1,330)
6.61 h 56 min1996X-RayR
A military investigator with his own troubled combat history interviews multiple soliders to discover if a female pilot - killed in the line of duty - deserves the Medal of Honor. With Matt Damon, Lou Diamond Phillips.

JosephReviewed in the United States on July 18, 2020
1.0 out of 5 stars
Liberal fantasy world wishful thinking tripe
Verified purchase
My wife and I are both Denzel fans so we watched this mess that even he couldn't save. If you wonder how the political left manages to stay in constant denial about the mess they have made of our country this is the explanation. They create films and TV shows where things are as they wish rather than as they are. I call it the science of wishful thinking. It's where they immerse themselves when confronted with raw facts.
Anyway, if you want to spend a couple hours watching pigs and helicopters fly this is the turkey for you.
18 people found this helpful

joel wingReviewed in the United States on October 15, 2020
4.0 out of 5 stars
Chaos of combat and the guilt some soldiers felt afterward
Verified purchase
Courage Under Fire is about two officers and their Gulf War experiences. The story revolves around three main characters. Captain Karen Walden (Meg Ryan) is up for the Medal of Honor. She was a helicopter pilot who saved a group of surrounded soldiers. She died in the action however. Lieutenant Colonel Serling (Denzel Washington) is put in charge of looking into the matter to see whether Captain Walden should win the medal. He is also dealing with his own time during the war when he was involved in a friendly fire incident and destroyed a tank in his own unit. He’s full of guilt as a result. The third character is Sergeant John Monfriez (Lou Diamond Phillips) who was Captain Walden’s gunner. He’s bitter over what happened and resents Walden. It turns out Serling is worried about a cover-up about what he did and what happened to Walden.

The movie is a compelling story about the chaos of combat and how it can be seen from different perspectives. It has a bit of a Roshomon element to it as Serling interviews people and each one has a different version of what happened and how Walden acted.

Washington of course is great in his role. His scenes with Phillips stand out because you can feel the pressure between them. It’s like they want to punch each other in the face if they could. You can also feel the weight on their soldiers over what they did during the war.

I’m not sure it was really necessary to have two stories Walden and Serling running parallel. They were both linked by trying to tell the truth of what happened but I also feel like they wanted to have a male story and highlight Denzel more.

Despite that Courage Under Fire is still a Great War film about accountability.

Glama PussReviewed in the United States on June 7, 2022
3.0 out of 5 stars
So what if someone is afraid, that only means...
Verified purchase
they are afraid, very natural, but to act even tho afraid, even if scared almost to death, that takes courage. There seem to be two different versions of Nat Serling's (Denzel's) story here as well as two of Captain Karen's (Meg Ryan's) story. Both acted with courage and both made errors. The one who came home and lied and acted against his officers and fellow army soldiers and then did the unthinkable, he is without courage. Great acting by all. I only wish these war movies would dismiss the violin and cello music that 'sells' war to us. There is very little that is noble about war...but I digress. Highly recommend.
One person found this helpful

Lanna S. SeuretReviewed in the United States on July 20, 2017
3.0 out of 5 stars
WOULD SOMEONE BE WILLING TO EXPLAIN THE MYSTERY TO ME?
Verified purchase
This film is a fine showcase for a courageous officer (Denzel Washington) to live by his values: he, even though under query by his senior officer
refuses to just pass on a recommendation for a medal of courage for another officer ( Meg Ryan) who was fatally injured by enemy attack (Gulf War) after her rescue helicopter was shot down.

SPOILER: The clues Denzel uncovers are from her crew who survived: one went AWOL, another was secretive, very angry, and soon committed
suicide in an eye popping run in with a train, actually witnessed by Washington. and another whose memory was unclear due to the trauma. The only discrepancy I could discern was that Lou Diamond Phillips (the angry suicide) said he was the one who thought of overboarding the drum of
napalm over the enemy camp and firing it with a pistol,destroying the tank and many lives, while Matt Damon (the seeming poor memory) reported
that Meg Ryan was the one who knew to do it,even while under great duress when her pilot was shot in the head, and she had to take over under fire.

The premise of the story was good, the acting excellent by everyone, the direction very good as to keep interest, and keep us awake, he flash backed the story those who were being interviewed by Washington told, so it stayed very fresh.

So, does it really matter whose idea it was to "bomb" the enemies on the ridge? A crew consists of real people with various experiences; the captain's job is to use good ideas and keep everyone focussed and alive, right? In the end, she did a lot to keep them alive, and refused to leave,
I'm guessing, because she was painfully and fatally wounded, and knew she would slow anyone down who had to carry her.

I just missed the point. Hopefully, one of you who understands this better than I will put me out of this misery.

Note: Removed one star just because it wasn't clear, and I wanted to be heard for my own experience.
6 people found this helpful

JAReviewed in the United States on December 16, 2017
5.0 out of 5 stars
The DVD was excellent and the movie itself was profound
Verified purchase
The DVD was excellent and the movie itself was profound. I don't know who did the screen play but I think the story line is terrific, you can't guess how it is going to end or what is going to happen next. Denzel Washington is terrific in it, he is one of those actors I always enjoy and his films are excellent. He's not afraid of gritty, unfunny stories that make us think about the important, valuable things in our lives. I always enjoy Meg Ryan but what a different, spine chilling tale to see her in. If anyone is inspired by stories of truth, forgiveness, and working through the amazing challenges our lives sometimes offer us this is a must see movie in my opinion. Debbie
9 people found this helpful

MrTwistoffReviewed in the United States on January 11, 2018
2.0 out of 5 stars
Movie would not play
Verified purchase
I love the movie (have it on DVD!), but tried upgrading to the Blu Ray version and it would not play on my LG blu ray player. I have a large blu ray collection and tons of other movies play on this unit, but have had a few movies that will not play and therefore have had to return them.

All of the extras would play fine. But the movie would not, jumping to a specific scene would not. Same at the other movies that would not play, once an attempt is made to play the movie (or any part of it), the unit locks up. I have to unplug power from the DVD player, power it back up and open the door to get it out. Have not figured out the pattern but some blu ray discs have some feature/format that makes them unplayable on some players. (The player is up to date with latest firmware, so it's not that.)

Anyway, returned the blu ray copy and kept the regular DVD copy of this one.
2 people found this helpful

Amazon CustomerReviewed in the United States on July 5, 2020
5.0 out of 5 stars
A very good movie
Verified purchase
First the movie (the story) is very good. Denzel is great (of course) Meg Ryan in unique role and is also great. This movie is one of a kind I believe regarding the subject matter. The movie twists so as Denzel's character who is seeking out the truth we find out what happens as he finds it out.
Very powerfull sad and heartbreaking that war is and always will be apart of our history and our future and all of us regardless have to pay the price in some way. Watch it and see what I mean
3 people found this helpful

glory beReviewed in the United States on October 28, 2014
5.0 out of 5 stars
The Face of Guilt
Verified purchase
Courage Under Fire is the story of several people who are not dealing with their feelings of guilt. Denzel Washington lives with the fact that he fired upon the tank of his best friend killing all those in the tank. A medivac helicopter is shot down and the Captain (Meg Ryan) does all that she can to keep her crew alive and alert. As they come under fire the crew want to make a run for it but the Captain lets them know that she is still in charge and no one is going anywhere.

It is Denzel Washington who is given the task of investagating the Captain to see if she should be awarded the Medal of Honor. As he questions the crew it becomes clear that they are being evasive and he searches for the truth.

Edward Zwick is really good directing this kind of movie. Meg and Denzel are the perfect pair for this story. The rest of the helicopter crew including Matt Damon, play their parts with incredible realism.
9 people found this helpful
See all reviews
Back to top
Get to Know Us
Make Money with Us
Amazon Payment Products
Let Us Help You
EnglishChoose a language for shopping. United StatesChoose a country/region for shopping.
© 1996-2022, Amazon.com, Inc. or its affiliates