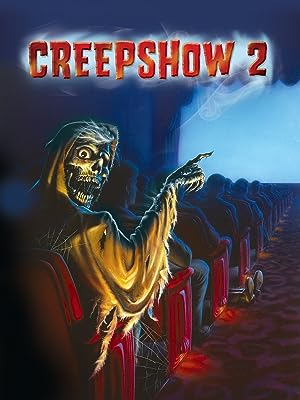 Jim BobReviewed in the United States on April 2, 2018
5.0 out of 5 stars
The horror "gods" have smiled upon us and finally blessed us with THE definitive Creepshow 2 experience!!
Verified purchase
This is the ONLY version true Creepshow fans should consider. Beautiful case with freshly drawn images plastered throughout the book that comes with, (all done in the classic comic book art style that is the series staple), brand new interviews from some of the cast including the actors, a detailed documentary by Greg Nicotero & Howard Burger on SFX & the legends themselves, George Romero & Tom Savini shed some light on the interesting production & journey of the crew behind the scenes in making the Creepshow 2 project happen. It seriously is the only way to watch this awesome classic on Blu-Ray. The case alone warrants a purchase!!
25 people found this helpful

(Fair warning, there is nudity, as Randy decides...for who knows what reason...to cop a feel when they're still very much in danger)

The rest is, like the first Creepshow, very hit or miss (the very first story, Old Chief Wood'n'head, whiffs so bad that I felt like George Kennedy starred in it for court-appointed community service). Probably doesn't help that it definitely is missing some budget loving, and looks more like a TV movie or a series of Goosebumps episodes. But like the first Creepshow, while it's not exactly groundbreaking horror, it's some gruesome fun to put on late Saturday night.

Tom FinkReviewed in the United States on May 24, 2022
4.0 out of 5 stars
Lesser follow-up to a horror classic, but still enjoyable
Verified purchase
As a fan of 1982’s “Creepshow,” I saw the follow-up, “Creepshow 2” as soon as it came out on VHS, in the late 80s, and found myself sorely underwhelmed.
Over the years, I’ve slowly come around to feel that my initial disappointment with the sequel was largely due to my constant comparisons of it to the original – arguably, one of the greatest horror/comedy anthologies of all time from three masters of horror: George Romero, Stephen King, and Tom Savini.
Taking the original film out of the equation and judging “Creepshow 2” on its own merits, I do have to admit that it’s actually not terrible, and for what it is, quite entertaining.
Based on three more stories by Stephen King, “Creepshow 2” finds original director Romero trading in the director’s chair for screenwriting duties. Calling the shots this time around is Michael Gornick, who worked as the director of photography on the original movie, and who makes his directing debut here.
Gornick directs the anthology sequel with relative competence, but without much style, especially when compared to the live-action EC Comics feel that Romero achieved in the original movie. Even so, Gornick does manage to achieve a genuinely fun to watch movie, which is really what these movies are all about. That, and the gore.
First up is “Old Chief Wood’nhead,” the weakest of the three segments in which the always-likable George Kennedy and Dorothy Lamour play the owners of a general store in a southwestern town that has gone to seed. One night, the couple is robbed and murdered by three criminals, but the couple’s much-loved cigar store Indian statue from the store’s porch comes to life and exacts its own bloody revenge.
The second segment, “The Raft” (adapted from King’s short story of the same name), is the best in the film. Even horror fans who don’t like “Creepshow 2” (myself included, although I’ve since grown to appreciate it) concede that this segment is exceptional. The premise: two young couples swim out to a stationary raft in the middle of a lake to have fun. Something that looks like an oil slick drifts over to them and begins dissolving them one by one, trapping them all on the raft.
Why “The Raft” works better than the other stories in the movie, it’s hard to say. The ways in which the killer oil slick gets to the teenagers is clever and surprising and gory (with a dash of nudity thrown in). It’s the segment that feels the most complete, and the one idea seen through to its logical conclusion, effectively constructed and containing a handful of surprises. Unlike the usual EC comics-inspired stories (bad people get their comeuppance), the horror of this segment is in its very randomness — these people didn’t bring the attack onto themselves, they didn’t do anything to deserve their doom, and they really have no way of combating the creature. The feeling of isolation and helplessness is what makes it resonate.
Lastly, there is “The Hitchhiker,” in which a woman (Lois Chiles) who has been having an affair accidentally hits and kills a man (Tom Wright) while driving home one night, but he refuses to die no matter what she does to him. He just keeps coming back, more and more disfigured, uttering the haunting but increasingly funny line: “Thanks for the ride, lady.”
Arrow Video’s release boasts a new 2K scan that improves upon the earlier 1080p version; it’s brighter and more colorful, revealing more film-like grain but also betraying the movie’s low-budget roots in the softness of the image and in the roughness of the wraparound (forgettable and predictable) animated sequences.
Many of the bonus features are carried over from previous releases, making a satisfying mix of old and new extras to dig into for those so inclined.
Ultimately, “Creepshow 2” may not live up to the greatness of the first, it nonetheless spins some interesting yarns and offers up a decent, if uneven, little horror anthology – one that’s worth a watch and, for fans of the genre, one that’s worth owning. Recommended.
One person found this helpful

Joseph VReviewed in the United States on December 6, 2017
3.0 out of 5 stars
Love this movie, but stick with the image entertainment release....
Verified purchase
Love this movie very much but the transfer on the IMAGE ENTERTAINMENT blu-ray release is so much better and TRUER to the original source! Save your money and buy that one TRUST ME! This one has been overly brightened, the skin tones have been changed and it doesn’t look natural! (like the way I remember seeing it). This is supposed to be a dark movie and it’s definitely way too bright and “tweaked.” A perfect example of a movie that didn’t need to be upgraded for the second time onto blu-ray. The first release looked great. WHY?!!!! Lol. You can only make an older movie look so good and now they’re messing with the original picture to “improve” quality... makes no sense to me... like I said, buy the image entertainment one. So much better 💯💯💯
17 people found this helpful

DafReviewed in the United States on August 24, 2021
4.0 out of 5 stars
Never pick up hitchhikers... on the hood of your car! Bwahaha!
Verified purchase
No matter what, going from five to just three tales for this 'Creepshow' go-round was always going to be disappointing, but I appreciate that there seemed to be an effort to make each of them "meaty," knowing this time there was no room for those simpler stories that built to a single punchline (I'm thinking of the cockroach segment from the original film in particular). In fact the first segments could probably sustain their own features with some finagling ("Old Chief Woodenhead" is essentially an elaborate slasher flick; "The Raft" is pretty much 'The Blob' in water).

TechnologistReviewed in the United States on April 16, 2019
1.0 out of 5 stars
Just awful
Verified purchase
The first one as corny but good, this one is just plain awful. I would be amiss to say it was even a good movie to watch even with a beer. I wouldnt even expect you to watch it if Elvira herself was hosting the show. Just bury it under your couch and maybe, just maybe, you'll get your own creep show at midnight.
11 people found this helpful

Jeff KorhornReviewed in the United States on June 6, 2019
1.0 out of 5 stars
Degrades women
Verified purchase
I liked the first Creepshow but this one is very degrading towards women. If you are looking for titillation, and getting a cheap look, then this may be for you.
13 people found this helpful

AdamReviewed in the United States on December 18, 2020
5.0 out of 5 stars
The Horror Anthology that deserves all the credit!
Verified purchase
If I could recommend to anyone my number one horror anthology, this would be the one! I must admit, I'm not really a fan of anthologies, but the creepshow movies, specifically the 2nd of the series, it's my absolute favorite. Spoiler alert: The raft episode will make you think again about going to the lakes and The Hitchhiker, omg I can't count how many times I no longer drive at night because of that episode. All in all, if you can watch one horror anthology, do yourself a favor and watch this one!
4 people found this helpful
See all reviews
Back to top
Get to Know Us
Make Money with Us
Amazon Payment Products
Let Us Help You
EnglishChoose a language for shopping. United StatesChoose a country/region for shopping.
© 1996-2022, Amazon.com, Inc. or its affiliates