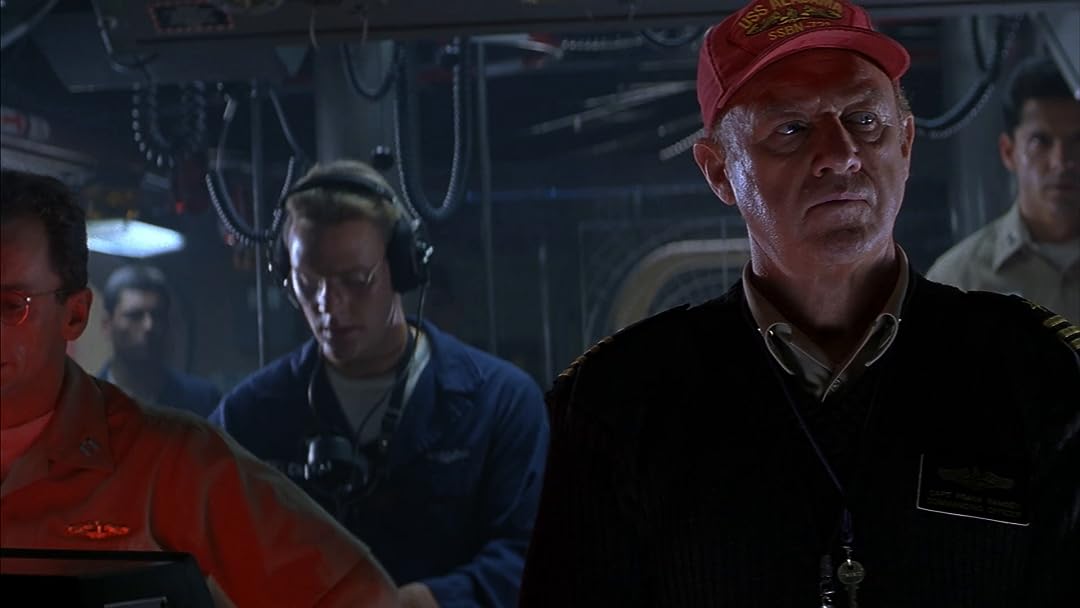 (4,320)
7.31 h 55 min1995X-RayR
On the verge of a possible Armageddon between the USS Alabama and a breakaway Russian republic with nuclear warheads, a young officer must stage a mutiny to prevent a disastrous underwater war.

R. A. BakerReviewed in the United States on March 15, 2021
3.0 out of 5 stars
Great Movie - Racial Focus Should be Ignored
Verified purchase
1. I am born and raised in Alabama.
2. I took classes at the U of A and worked there for 11 years.
3. I am a lifelong Crimson Tide fan.
4. Gene Hackman and Denzel are two of my favorite actors.
5. Including in-laws we have six retired Colonels in our extended family.
This movie is excellent. Tons of drama. Conflict not only with the Russians, but between two alpha-dog officers.
All officers on-board are put in an untenable position of loyalty to their leader coupled with adherence to the Military Code.
Hackman, who served in the Navy (as a Marine), is always believable and does a good job of being a crusty, get'ur done Captain. Denzel is also a great actor. The two of them together is just good acting. Period.
I would rate this movie 5 Stars except for two things:
1. The racial issue seems far too contrived.
Almost every single older black career military man I have met told me the military was the closest thing to color-blind they have ever experienced.
The movie plot did NOT need the gratuitous racial component. It is sad to me that such a good movie would be tainted by this kind of social commentary.
There are several great YouTube videos of Denzel Washington where his message is loud and clear: race is not an issue in the USA - work hard, live right and treat others right. This lifestyle equals success.
2. The Captain punches the Executive Officer in the face.
Even with the tense situation of the movie, I just cannot see this happening. This kind of aggressive behavior has been slowly eradicated over the years, even by 1995 standards.
Great Movie...especially for an Alabama boy. Lose the racial object lesson for 5 Stars.

Hugh K.Reviewed in the United States on May 31, 2019
4.0 out of 5 stars
Hidden gem
Verified purchase
I saw this film when it first came out in the theaters. At the time I didn't much care for it. I just bought the BD and watched it again after over 20 years. The 20 years older me saw the nuances and the power struggle under a whole another light. The film was fantastic! Two of the best actors going head to head, with a beautifully written script, under Tony Scott's masterful direction -- this is the type of big-budget, main-stream entertainment we don't often see today.

Crimson Tide is worth a revisit. The BD's video and audio are decent, but nothing to write home about. It's definitely dated, but in a wonderful classic film sort of way.
12 people found this helpful

joel wingReviewed in the United States on August 19, 2020
3.0 out of 5 stars
Hackman and Washington are great Ending very predictable
Verified purchase
Russia is falling into civil war. A strongman is threatening to fire nuclear missiles at the United States. It responds by scrambling its armed forces included a submarine commanded by Gene Hackman as Captain Frank Ramsey, along with Lt. Commander Ron Hunter (Denzel Washington), Lt. Peter Ince (Viggo Mortensen), and Lt. Bobby Dougherty (James Gandolfini). Tony Scott did the directing along with Jerry Bruckheimer as co-director. The story focuses upon the tension over what’s going on in Russia along with the conflict between Ramsey and Hunter.

The movie has plenty of action, but it’s all the usual submarine fare. One side fires torpedoes, the other side uses countermeasures, there’s a chase, there’s flooding, etc.

The real story is about how Captain Ramsey and Commander Hunter disagree and the power struggles that ensue. Hackman and Washington are their usual intense selves.

The major problem is the ending is completely predictable.
C
3 people found this helpful

AtalantaReviewed in the United States on April 15, 2022
3.0 out of 5 stars
Okay movie until the end, then it loses momentum and disappoints
Verified purchase
***Some minor spoiler-ish bits.

Premise is interesting - there's been a sort of coup in the USSR and they have captured a nuclear silo complex. The US scrambles subs in the area in anticipation of a possible retaliatory strike, should the coup leader (who is saber rattling), order a strike on the US from that seized complex.

Gene Hackman plays a one dimensional character with some race-biased overtones, and Denzel Washington is (surprisingly) a bit stiff as the XO Hackman decides to appoint to replace his usual XO, who is sick.

I love subs and I love Cold War movies, so I can forgive some of the above. The sets are great and the appearance of some good supporting actors- including Viggo Mortensen - helps compensate. But after a while the flaws tend to grate. Hackman is too much the irritating, abrasive and haughty captain, who thinks he is God. For someone in the sub service, Washington seems almost meek and confused at points, until he very much ISN'T. When an order comes in to prepare for a potential launch and then the sub is damaged, leaving a subsequent order incomplete, Hackman and Washington come to odds.

I know it's Hollywood, but a feel a lot of disservice is done to submariners. So many of them seem either unsure, hysterical, emotional or mercenary. If you know something about the sub service, because of the nature of it candidates are heavily screened and trained. So the shrill sound of the radar operator's voice, or James Gandolfini verging on someone who is psychotic really beggars belief.

I won't play out the twists and turns, but things get VERY bad on board, with crew taking sides and even weapons drawn.

It is eventually resolved, and then comes the Naval review of the situation, which is just RIDICULOUS and just impossible to believe, really undermining the tension and making the Navy almost seem very corrupt. For a tantalizing idea, good actors and equally good sets and filming, the execution leaves a lot to be desired. Cleaned up, more realistic with appropriate tension and more depth to make the characters more relatable, this could be a banger of a thriller. As presented, it just doesn't do the trick.

GottaDoSumptinReviewed in the United States on November 8, 2021
3.0 out of 5 stars
A True Leader Wins the Hearts and Minds of their Crew
Verified purchase
It was once said that Denzel Washington was the most over-rated, most over-paid actor in Hollywood. I don’t know about that but he sure is eye-candy and does have a captivating presence. But, for me, Gene Hackman is the more versatile actor, capable to bring validity to any character he is assigned. Gene Hackman steals this show. Besides Washington’s and Hackman’s star-power, in addition to an ensemble cast of note (George Dzundza, Viggo Mortensen, James Gandolfini, Matt Craven, Ricky Schroder, Steve Zahn, Ryan Phillippe, among others), I was expecting more from this film than a mutiny in a submarine.

Tensions arise between headstrong combat-hardened veteran Captain Frank Ramsey (Hackman) and Lieutenant Commander Ron Hunter (Washington) as his new XO, who has an extensive education in military history and tactics, therefore is more analytical and cautious, but no combat experience. We have a clash of wills (and underlying bigotry) from the git-go and two different styles of command – one old school, the other new – one brute force, the other psychological. The action takes place during a period of political turmoil in the Russian Federation, in which ultranationalists threaten to launch nuclear missiles at the United States and Japan. Ramsey’s and Hunter’s conflict comes to a head over interpretations of an order to launch their missiles – Ramsey proceeds, Hunter refuses to concur.

As I was watching, I kept seeing a re-boot of “Run Silent, Run Deep” (1958, Clark Gable/Burt Lancaster) with a twist = the race card. During the Mexican standoff near the end, an analogy is made to the Lipizzaner stallions.

The critics raved when the movie was released. I preferred “Run Silent, Run Deep”, but that’s not saying “Crimson Tide” is not worth your time… because it is.
One person found this helpful

MellieReviewed in the United States on June 4, 2019
4.0 out of 5 stars
Great submarine film
Verified purchase
I just watched this movie again, and it's now 2019 (twenty-four years later). It's a really good movie! I'm not at all military-trained or experienced, but I'm fascinated by all things submarine. It's interesting to me to watch how things are done (and I imagine it's mostly accurate) on a nuclear submarine, and a submarine in general. My husband, for instance, would get bored with all of the command-repeating, but I found it all engrossing. And, as you might expect, there is a broader lesson to be learned.

I bought this movie from Amazon in blu-ray format and also streamed it. The streaming video is pretty good, for an older movie, but I couldn't turn the sound up quite loud enough. So I just turned on subtitles, Problem solved.

PS - the dog is a great character in this movie. Kinda made me wonder if I could like Jack Russells after all.
4 people found this helpful

ReviewReviewed in the United States on November 15, 2020
1.0 out of 5 stars
The Most Boring Of Sub Movies
Verified purchase
Of all the films ever made that involve submarines and some kind of military action Crimson Tide is pretty much the most boring. This film hasn't stood the test of time and is as boring today (2020) as when it first made it to the big screen. Hopefully this film will continue to serve as an example of how not to make a film or tell a story that revolves around a submarine involved in military action. Who cares about this type of interpersonal drama onboard a nuclear sub? A trigger-happy captain of a nuclear sub who suffers from anger management issues and breaks under pressure is not believable, not even as a fictional character. The US Navy and in fact the navy of no country would put such a person as Gene Hackman portrays in the captain's chair of any sub let alone a nuclear sub carrying nuclear missiles. Still, you have to give credit to Hackman and Washington for doing so well with such lackluster material. Sorry Gene and Denzel, you did deserve better, but the money must have been good.
3 people found this helpful
See all reviews
Back to top
Get to Know Us
Make Money with Us
Amazon Payment Products
Let Us Help You
EnglishChoose a language for shopping. United StatesChoose a country/region for shopping.
© 1996-2022, Amazon.com, Inc. or its affiliates