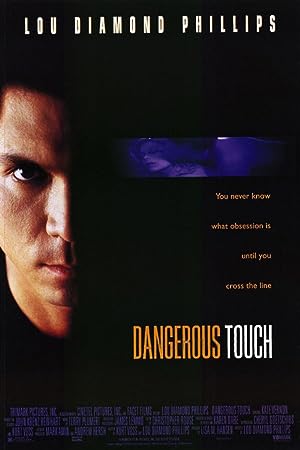 (60)
4.31 h 41 min1994R
Radio sex therapist Amanda Grace should heed her own advice instead of getting entangled with shady Mick in this sexy thriller written and directed by Lou Diamond Phillips.

StargazerReviewed in the United States on September 19, 2021
5.0 out of 5 stars
Great movie
Verified purchase
Dangerous Touch is a 1994 thriller film directed by Lou Diamond Phillips. He also co-wrote the film with Kurt Voss, and Lisa Hansen co-produced the film. Lou's character got involved with a therapist who was the Dr of a man responsible for Lou's character being in prison

Be careful with the emotions you play with you might just create a worse monster than yourself. Great movie

MimiMoonbeamReviewed in the United States on February 13, 2016
3.0 out of 5 stars
A good movie to have on while your doing your nails (or laundry).
Verified purchase
This was ok for an 80's movie. The acting was a bit wooden, and given the "soft core" content, there wasn't that much chemistry between the characters. It had some elements of classic film noire, but it gave away a bit too much. On one hand, If the director(s) had left a little more to the imagination it would have been more interesting. On the other hand the story doesn't explain enough. The main character's motivation for revenge was a bit questionable. He did three years in jail so a dangerous gangster wouldn't kill him; that should be the end of the story.

Overall the movie is visually pleasing and the ending seems to resolve the issues, if a bit "fantastically"--they glibbly depart the scene of a double homicide. This movie will give you something to do if your bored while folding clothes.

Mbeth G.Reviewed in the United States on August 31, 2015
2.0 out of 5 stars
No Love for Lou This Time
Verified purchase
I love Lou Diamond Phillips. However, I did not love this movie. There really wasn't much of a plot. The whole thing could have been shown in 20 minutes flat. So fill in the time with seduction, sex, sex seduction and sex; and there you have it. Sorry Lou. Love you in Longmire.
2 people found this helpful

Susan K.Reviewed in the United States on April 22, 2021
4.0 out of 5 stars
LDP was not a cop in this movie.
Verified purchase
LDP didn't play a cop or a Native American, so I was a little thrown off by this movie. Lots of sex. LDP's butt. Didnt care for the female lead. Will watch again.

Savannah2751Reviewed in the United States on October 15, 2015
4.0 out of 5 stars
Interesting
Verified purchase
I am a Lou Diamond Philips fan, so of course I was happy with this. He has played a wide range of roles. Didn't know he was so much involved behind the screen. I liked the female lead too, but don't remember seeing her since this movie. interesting plot.

RufinoReviewed in the United States on March 13, 2015
4.0 out of 5 stars
Nice movie!
Verified purchase
This is a very interesting movie. The story may be a mere fiction, but it depicts a situation that may occur in the life of any of us. I do recommend it to responsible adults.

tito shawReviewed in the United States on June 11, 2015
3.0 out of 5 stars
lou diamond bares all
Verified purchase
you most definitely have to be a Lou Diamond fan to enjoy this smug, self-satisfied foray into forbidden territory -- namely male nudity -- which probably at the time of filming ( almost 20 years ago ) was considered risque. buy by today's internet standards seem almost puerile. a not-too-bright addition to the suspense/thriller genre. like i said, if you're into Lou Diamond, by all means watch it. it's as good as it gets to see him unclothed, but if that's not a selling point for you,then skip it.
See all reviews
Back to top
Get to Know Us
Make Money with Us
Amazon Payment Products
Let Us Help You
EnglishChoose a language for shopping. United StatesChoose a country/region for shopping.
© 1996-2022, Amazon.com, Inc. or its affiliates