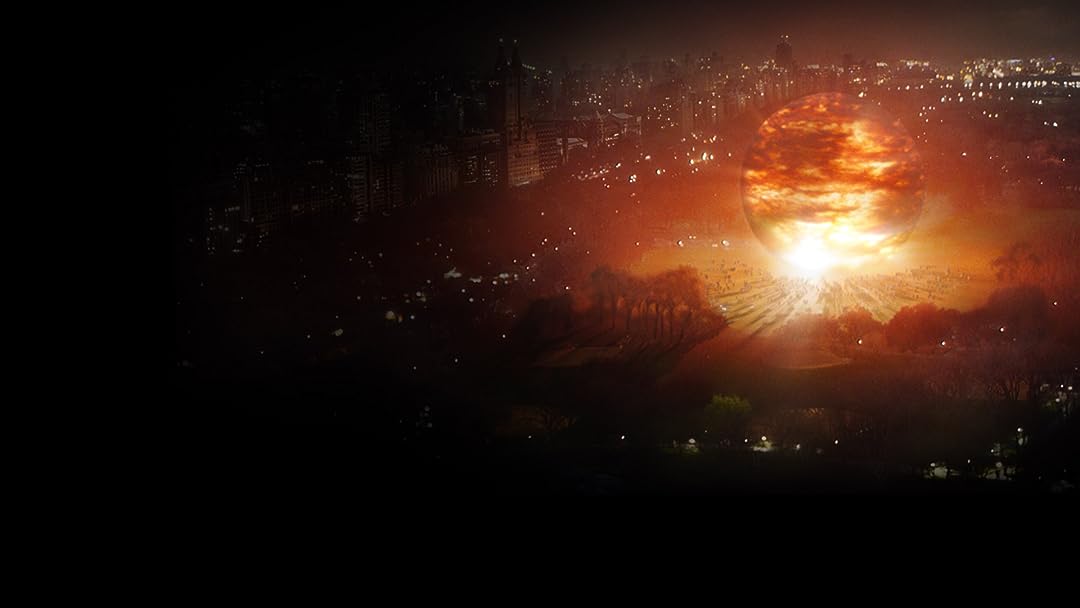 The Day the Earth Stood Still

MemphisReviewed in the United States on October 2, 2019
1.0 out of 5 stars
Vacuous Liberal Propaganda, but well produced...
Verified purchase
This is the ultimate, predictably liberal climate change lie, mankind is ruining the planet, we should all eat tofu, save the snail darters at the expense of human life, etc., etc. movie. Those who concocted this virtue signaling, pontificating propaganda failed to explain what happens to humans after the aliens depart -- having either destroyed or permanently disabled everything from public transportation to indoor plumbing. Assuming they didn't relieve us of our firearms and they returned all the animals they stole and somehow plant life survived the little metal horseflies they unleashed on the planet and the little metal horseflies stayed dead, maybe the human race would have a chance to survive, but probably not. An absolutely perfect example of the kind of delusional and both intellectually and emotionally retarded propaganda that liberals spend and make millions of dollars foisting on the public. Thank God not all of us are so stupid as to take any of this nonsense seriously, and just enjoy the talent of the folks who write, act, produce, provide the CGI, etc., etc. The problem is that this kind of propaganda actually influences the thinking of the intellectually challenged, and those include people who actually get to vote when they really shouldn't be allowed outdoors without adult supervision. Liked the movie, disliked the message. Quite the conundrum. If you're not bought into the climate change hoax and identity politics hate being preached to you by self aggrandizing, virtue signaling liberal poltroons, this movie will definitely offend you. If you're a vacuous sheep, knock yourself out.
176 people found this helpful

flymasterReviewed in the United States on November 12, 2021
3.0 out of 5 stars
wasted good idea
Verified purchase
There are some good things about the movie. Namely, the original idea. And partially the execution. But there is a lot that is really bad.
The science is just terrible. And at a level that did not have to be. At the very beginning, Connoly (who's supposed to be a scientists) is using optical microscope but the view is from electron microscope. That's the first minute. It showed that all scientific advisors were fired and all elementary biology books were burned. Five minutes later, bunch of "scientists" are saying that speed of the space ship is "3 time 10 over 7 meters per sec". No one would ever say that. It's just 3000 km/sec. And it goes on and on. Everything that has anything to do with science is just plain terrible and makes absolutely no sense. Hollywood makers really need to ask people that know anything about anything to help them. This is recurring problem making most of movies terrible. For all the directors and writers out there: Stop making terrible movies out of your arrogance. Just because you're paid millions and have million $$ budget doesn't mean you know anything else.
But it's not just the science. The acting is bad. Connoly plays her usual role and it's not surprising is one dimensional. Why is she getting any roles is besides me. The kid is the worse, tho. Horrible actor and the character is incredibly annoying. I was wishing the alien destroys the Earth just that we get rid of the kid. Or the actor playing it. Or both. Would be worth it :)
And of course, Keanu is also playing his usual self. But it's Keanu and his way of acting fits ok to the alien form he plays.
The aliens makes no sense. They are studying humans for decades (or more) and know so much about us but somehow realize that humans are no all bad only after one day with one woman. Who did not do anything different from what millions of people are doing every day. It seems like the script was re-written or the writer is very bad.
So, as I put in the title, the primary idea is good but combination of a bad director, poor writer and in general terrible acting totally killed it.
I gave it 3 stars but it probably doesn't deserve it. Maybe because I withstand it for the whole length and finished watching it.

hollyReviewed in the United States on September 9, 2021
1.0 out of 5 stars
Nice try, fell flat
Verified purchase
I'm a huge Keanu Reeves fan and sci-fi fan. The original 1951 film was better...waaay better. The only cool thing about this remake is G.O.R.T. who unfortunately had very little screen time and was woefully under-used. I understand what Hollywood was trying to preach; climate change, humans are destructive which are all true, however, the story was told rather scatterbrained in the midst of the annoying bratty kid disrespecting his stepmom and the one single government official out of the entire planet's attempt to control the alien. Omg the kid was super annoying and got on my last nerve. In my opinion, they could have (should have) written him out. And with the Sec Of Defense, you don't get the feeling of a large scale threat ...no other countries were represented at all. This Klaaatu was great in the beginning, Keanu's vacant yet intense stare at the Sec Of Defense at the "our planet" comment was very cool and chilling, so was his escape but it went downhill from there. It would have been awesome had the remake, with all of our CGI special FX tech could have followed the original a little more closely. G.O.R.T. in the original was far more menacing. The malice in the remake G.O.R.T. was conveyed in only two scenes: the part when Klaatu was shot with the attempted "lean over snatch" retaliation, and the fiery eyeball that followed the idiot in the bunker but that was it. Geez, what a waste as this remake could have been awesome.
29 people found this helpful

Big PaPaReviewed in the United States on February 26, 2019
1.0 out of 5 stars
90 minutes of my life I'll never get back
Verified purchase
Product arrived intact and timely - would buy from this seller again - this is merely a movie review. This movie is much worse than a worthless and shameful remake of a wonderful, time-tested classic. What an insult to the original. Best analogy I could come up with is having Yakov Smirnoff play the part of Kunta Kinte in a remake of Roots. There were MAYBE 3 quick clips that might touch on the original. The only worthwhile minute and a half is the added exchange between Klatu and the old Chinese man at Mc D'.s. other than that, it is landfill material.
58 people found this helpful

Blue DragonflyReviewed in the United States on November 11, 2021
5.0 out of 5 stars
Best version for our times
Verified purchase
I really like this version of "The Day the Earth Stood Still" because it is updated to where we stand, now, on our planet. Keanu Reeves did an excellent acting job as the Alien. He is able to keep an emotional distance and plays the role of the detached entity, here to save the planet from a destructive species, very authentically; which has to have been a difficult role. Great cast overall and the small cameo role by John Cleese was pivotal though brief. My only question is why was Jaden Smith even in this movie? His role seemed superfluous The special effects were wonderful and the robot was very cool. I'm impressed with the screen play, updated from the old "Cold War" theme to this time of destructive greed, political and social chaos and out of control technology. So telling, that the Secretary of Defense denied the alien a chance to speak to all world leaders and decided to treat him and them as an enemy before they even knew his message. Thank you Amazon Prime for offering it this month for free. It is one of my favorite movies.
20 people found this helpful

Amazon CustomerReviewed in the United States on July 15, 2018
2.0 out of 5 stars
Loved the spheres instead of spaceships
Verified purchase
Loved the spheres instead of spaceships. But that kid was so annoying...I couldn't help wishing the metal bug what's-its had got him. The old man was creepy...what the hell was he telling Connelly when she left? Connelly herself was like an automaton. There was something almost creepy about her flatness at times. I wished it had been intentional, but it wasn't. Reeves was OK as Klaatu, but his conversation with the old Chinese man was comically stilted and absurd...and it got worse from there. An emergency of this scale, and we never even saw the POTUS or VP, or ANY head of state. Just the same few military men and Kathy Bates running around being needlessly inconsequential.

But the unrealistic, Hollywood nonsense at the end..."I feel it now." HA!

Honestly, people can handle more realism than that! Contrary to what Hollywood fears or wishes, the masses are not that stupid or weak...yet.
41 people found this helpful

Ron WattsReviewed in the United States on October 31, 2021
5.0 out of 5 stars
An Excellent Remake of a Classic Movie
Verified purchase
I always loved the original movie, but I was taken completely by surprise that this new one is so darned good! It has a lot to say about how we humans are destroying this beautiful planet that gave birth to us, and the ultimate consequence of our actions. The warning given by this movie is unfortunately what it would take to get our leaders around the globe to wake up and take action. I found it delightful and sobering at the same time. Everyone should see this and take note.
14 people found this helpful

Thomas RyansReviewed in the United States on December 31, 2017
1.0 out of 5 stars
Such a wasted opportunity
Verified purchase
It started off alright but becomes horribly predictable. Every character is so cliché and stereotypical it becomes unwatchable. I turned it off halfway through.
55 people found this helpful
See all reviews
Back to top
Get to Know Us
Make Money with Us
Amazon Payment Products
Let Us Help You
EnglishChoose a language for shopping. United StatesChoose a country/region for shopping.
© 1996-2022, Amazon.com, Inc. or its affiliates