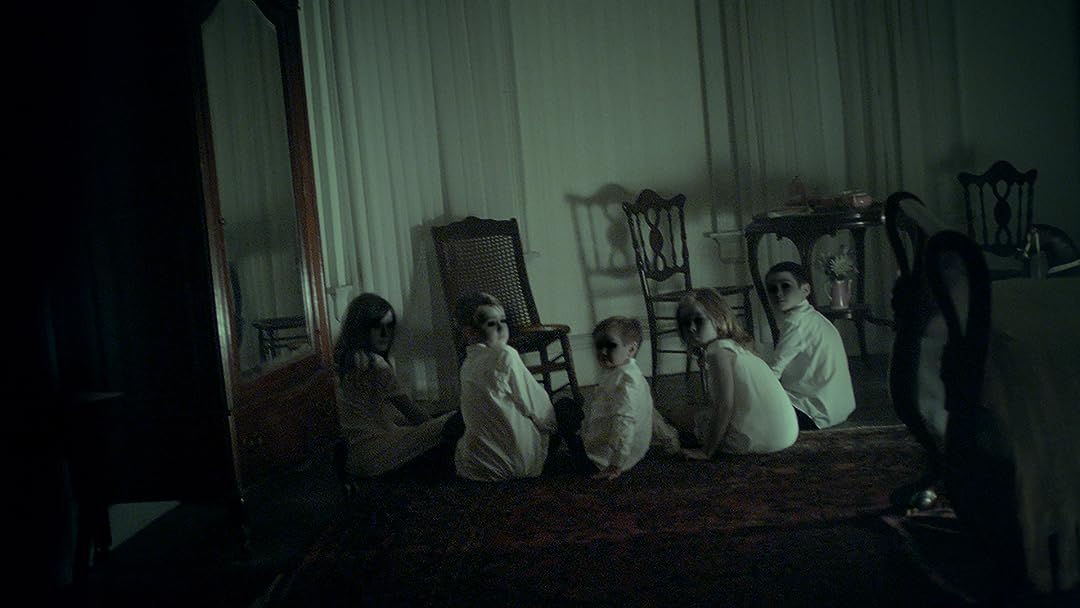 (56)
5.71 h 24 min2018X-RayUHD18+
A young man attempts to reach the doorstep of a legendary old house, reputed to be haunted, but when he doesn't return, the classmates who dared him must go in after him, discovering the truth about the house, and their friend's gruesome fate.

John PantherReviewed in the United States on May 10, 2019
2.0 out of 5 stars
Well made, but bad storytelling
Verified purchase
The movie had a decent budget, and the actors were actually professional, but the backstory for the whole movie was terrible. The writers apparently had three conflicting ideas for the "why" of the haunted house.

First: in the opening credits we see a slow panning scene of a medical office. Then we see that a man is being murdered by a woman in a white dress. The man appears to have been preforming some kind of medical experiments on a girl, from whom he has removed something and left her dead. The camera then pans across a row of dead girls laying on the floor, the woman in whites hand reaching in to close their still open eyes. The credits scene ends with the woman in white having hung herself with the girls laying on the floor, the girl who was cut open still on the table, and the man slumped over in the background.

Second: A short "campfire" version, and then a longer version of a different story. The woman's husband built the mansion for her, and then they had 12 children. She was pregnant with the 13th, and something went wrong, and she died in childbirth (or he flat out murdered her) he went crazy and killed the other kids. Then cleaned them all up, and arranged them in the nursery as if she was telling a story. The police took pictures of this crime scene and have no idea how they died.

Third: The mother (the woman in white) possesses one of the boys, and then acts insane as she says that the main character is the Father and he tried to leave them, but she wouldn't let him.

So...which is it? Mad scientist who murdered his family preforming sick experiments? A father who went mad with grief and killed his family? Or an insane mother who killed them all to keep the family she loved together?

Then there are the ghosts. A tall gaunt man with a slashed throat, walking around glaring at the boys. Obviously not the father as the main character is supposed to be his reincarnation, and not the doctor from the opening credits since he was played by a different actor, and killed with a hammer. This man is also shown to be helping the mother carry the children in another scene. There is no mention of butlers or secret lovers or any other explanation for who he is supposed to be. In the opening credits all the children are girls, they have their eyes, and their mouths are stitch free. The child ghosts for the rest of the movie are a mix of boys and girls with no eyes, and sewn closed mouths.

The opening credits were the best part of this movie, telling the story of the house and setting a horrifying backstory in place to build on. The second story we are told has nothing to do with the opening credits, and I don't care if they didn't have CSI at the time, you can tell if someone has hanged themselves pretty easily from the wounds on the neck. Trust me I have actually written papers on this very thing! Also the woman from the opening credits wasn't pregnant, while the stories version was.

It's obvious that this movie was made by people who had a bunch of creepy, scary story ideas, but no clue how to stitch them together to properly make a good story. In conclusion, a decent budget, professional actors, terrible writing.

WicingasReviewed in the United States on May 23, 2022
3.0 out of 5 stars
Its okay
Verified purchase
The actors were good and the atmosphere great. Unfortunalely, not much originality. It clearly borrowed from THE SHINING (among others), including a poorly imitated ghost in the bathtub scene. As expected, the dead appear as images in a "family" photograph. The attempt to create phychological scares just doesn't work when the audience is expecting it. The back story was also a little fuzzy to me. It was a shame. Good talent and setting wasted.

Chris CochranReviewed in the United States on May 2, 2018
1.0 out of 5 stars
Hazing without the fun
Verified purchase
The trailer and the title sequence make up all the good aspects of this movie. I think it's best to turn it off after that. Imagine you took the haunted house story from VHS, subtracted the clever visuals, placed it inside a college hazing ritual movie, randomly de-aged the characters to a HIGH SCHOOL hazing, and then (spoiler!) pull a visual gag from the ending of The Shining. That is this movie.

I'm sure the movie made sense to the screen writer in his head.
6 people found this helpful

Mark MelchiorReviewed in the United States on June 1, 2022
1.0 out of 5 stars
really bad.
Verified purchase
I wanted to like this...but there was so much wrong with it that, in the end, I wonder how or why this got made in the first place. Direction was terrible. Casting was ok, but the actiong or direction should I say, was some of the worst. Writing was the bottom factor for me. It felt like a budget movie that was thrown together to make a deadline of some sort. Do yourself a favor and pass on this one.

D. WilliamsReviewed in the United States on May 22, 2018
3.0 out of 5 stars
I found it entertaining enough to watch until the end
Verified purchase
I enjoyed this movie for the most part. It by no means was perfect, but it kept me entertained enough to watch until the end. I always find it interesting how these kinds of movies start off with a bunch of skeptics who don't believe anything they've heard about a haunted house, yet by the time the story ends, they wish that they had listened and have paid a horrible price for not doing so. I don't think I found this movie as being so much scary, but more as being creepy and uneasy about what was going to happen in the next scenes as the boys walked through that house.
3 people found this helpful

AnonReviewed in the United States on May 12, 2018
4.0 out of 5 stars
Surprisingly good!
Verified purchase
A found-footage love letter to Kubrick's The Shining with excellent production, especially art direction and sound. Based on the 1-star reviews here, I was prepared to find movie silly and/or terrible and planned to use it as background noise while I did a few things at my desk. I wound up watching most of the movie instead of doing the desk things, which is high praise. People who hate FF movies will likely hate this. Otherwise, give it a shot. If nothing else, it's pretty darned spooky.
4 people found this helpful

Kelly SurgesReviewed in the United States on May 1, 2022
3.0 out of 5 stars
The cast and crew listed is incorrect
Verified purchase
Decent movie to pass time away. Acting is good and the story is interesting although does not come together well. My biggest issue is, at least on my website, it lists several actors who were not in this movie. The cast and crew info was the only reason I gave this movie a watch. I was underwhelmed but I made it to the end. NO jump scares and very predictable but overall a good concept.
One person found this helpful

ceyReviewed in the United States on March 8, 2022
2.0 out of 5 stars
Poor "found footage" type film
Verified purchase
so the premise as to why the house was hellish was straightforward, but the overall execution as a type of 'found footage' film was poor. I wouldn't recommend this ... unless you are multitasking and want some background or are drinking and multitasking and want something that won't distract to much.
One person found this helpful
See all reviews
Back to top
Get to Know Us
Make Money with Us
Amazon Payment Products
Let Us Help You
EnglishChoose a language for shopping. United StatesChoose a country/region for shopping.
© 1996-2022, Amazon.com, Inc. or its affiliates