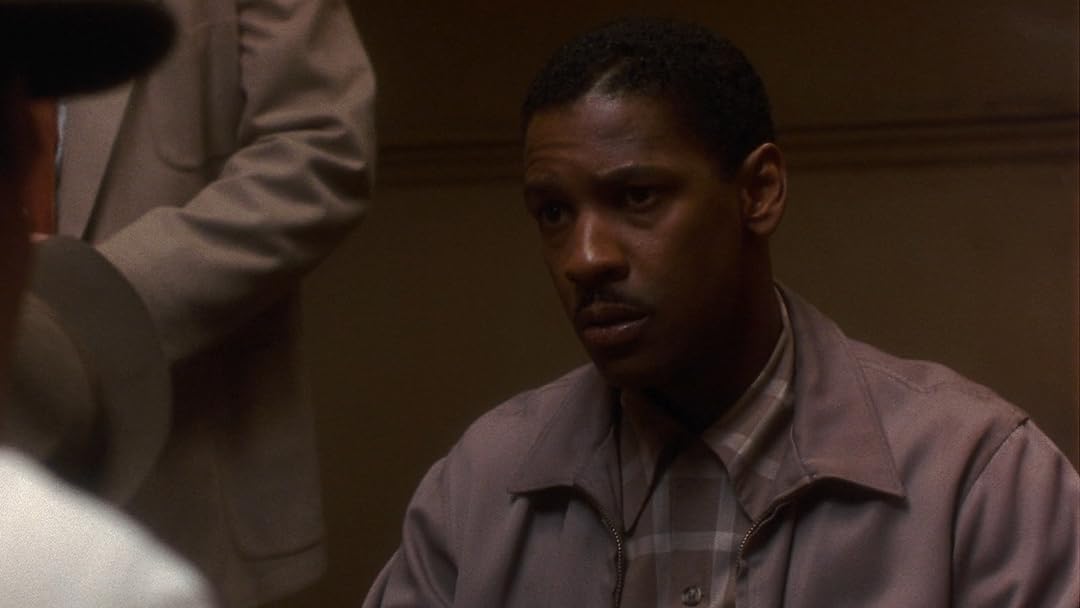 Devil In A Blue Dress

joel wingReviewed in the United States on April 15, 2020
4.0 out of 5 stars
A story about race and corruption in post-WWII Los Angeles
Verified purchase
Devil In A Blue Dress was a film adaptation of Walter Mosley’s first book of the same name. The movie featured Denzel Washington as Easy Rawlings, Don Cheadle as his friend Mouse, Tom Sizemore as DeWitt Albright, and Jennifer Beals as Daphne Monet. The first part of the film sticks closely to its literary source. The second half was new and unnecessarily made the plot far more complicated than it had to be. DeWitt Albright hires Easy to find a woman named Daphne. During his investigation dead bodies start showing up and Easy is afraid he’ll be blamed because he’s black and would make a perfect scapegoat for the police. That brings up the themes of of African Americans after World War II and the corruption in Los Angeles.

The story is good but goes through too many twists at the end. At first, it’s a straightforward detective job as Easy goes around to different locations and talking to people looking for Daphne. The two eventually find each other but she tries to manipulate him, hence she is the Devil In A Blue Dress. After that however things get twisted around so much many people might get lost as to what happened. I blame this solely on the screenwriter Carl Franklin. If he’d just stuck to the book more the plot would have been much better.

The message about blacks in postwar LA uses a lot of subtle symbolism but is very important. Easy came to the city from Houston, Texas in what was called the Second Great Migration as African Americans left the south for the West Coast to get war jobs during WWII. Easy fought in the war, got out, worked in an aircraft factory and used the G.I. Bill to buy a house, which was his pride and joy. He represented the black middle class that was formed in the state during the war. When the conflict ended however, blacks were the first fired. That’s shown as Easy gets laid off from his plane job, which is why he goes to work for Albright, he needs the money to keep his house and maintain the California Dream. A man in Easy’s neighborhood keeps on trying to cut down people’s trees including Easy’s. That represents cutting down the dreams of African Americans. They came to California, found success, but afterward many of them took a step backwards as they got laid off, their kids were segregated, their children went to inferior schools as a result, and many of their neighborhoods turned into ghettos. Daphne also has a message, but to reveal her symbolism would be to spoil the story.

Finally, Devil In A Blue Dress is a neo-Film Noire. Easy finds that Daphne is connected to all kinds of powerful people in Los Angeles who are corrupt and racist. They try to hush up their crimes and maintain their images as the fathers of the city. Easy is caught between them in what seems an unwinnable situation which is a hallmark of Noire films. Daphne Monet is also a femme fatale a beautiful woman who causes nothing but trouble for the women that get involved her with. It also has some of the sharp and short dialogue Noir's are known for.

Overall, Devil In A Blue dress is a very good mystery. While the story gets complicated it actually might be better than the book, and the messaging about race and Los Angeles are stronger in the film than the original novel.
C

Eric WarrenReviewed in the United States on May 5, 2022
4.0 out of 5 stars
I usually don't compare the book to the movie, but...
Verified purchase
I had seen this solid Carl Franklin thriller a few years ago. I recently read the book, and have fallen in love with Walter Mosley. I'm a big fan of Noir, Crime Thrillers, and trying to expand my reading of BIPOC authors.

Anyway, I did really like this, the second time. Only thing, I felt the book did do a better job of capturing the spirit of racisim that existed in post-war LA, especially from the point of view of the main character, Ezekiel "Easy" Rawlins. I will literally watch anything that has Denzel Washington in it, and here he is smooth, savvy self-assured as Mosley's GI Bill homeowner-turned-factory worker. What we don't know as that in this, the first Easy Rawlins mystery, Easy is learning to be what he will become in future books, a Private Detective. Or "Private Dick" as Jennifer Beals's Daphne Monet almost spits out when she first meets our hero.

The direction is assured, the screenplay sometimes a bit creaky, but largely true to Mosely's novel. Some reviewers have pointed out that the film takes a bit of a left turn in the Third Reel. I kept waiting for a crucial scene in a remote hideaway (won't spoil it, read the book) but that is morphed into a shootout in a Malibu house.

Cast here is top-notch. I would say, perhaps, Tom Sizemore as the sleazy gangster Albright may be best. He kind of inhabits the role. Beals is just OK as Daphne. I suppose the issue I had was with her hair and makeup - and costume. I kept thinking they dressed and made up Faye Dunaway way better in Chinatown. Not sure what to make of the minor characters, as they mostly seem a bit cardboard. Was expecting more from Don Cheadle as Mouse. Mouse is a crucial character in the book, albeit one who, although talked about a lot only appears in person in the second half. Cheadle seems to be thoroughly enjoying the role, but I don't think he ever nails it. Perhaps I was distracted by the Gold implants in his teeth.

Overall, taken separately from the book, "Devil" is a good film. Enjoyable, and breezy. A great slice of post-war LA. If you read the book, or plan to, perhaps watch the film first. Must my suggestion.
2 people found this helpful

Steve M.Reviewed in the United States on June 27, 2018
5.0 out of 5 stars
Not your usual modern film, definitely worth a look
Verified purchase
We love film noir, detective stories, things like that. It's hard to find modern films that have character depth, a good, multi-faceted story, and are well-produced. The dumbing down of America continues. This is not the best of the best but it's very good, and it bucks the trend of shallow movies that are obviously made to entertain the mainstream, hypnotized masses.
11 people found this helpful

1.21 Jiggawatts!?!Reviewed in the United States on December 8, 2020
4.0 out of 5 stars
7.5/10 Great neo-noir mystery (think 'LA Confidential'), set in the post war era
Verified purchase
7.5/10 means this movie is very good, and I have watched it several times, over the years (somewhat rare that I find a movie worth watching more than once). 7.5 is not quite among the best movies of all time, however... but very solid entertainment. I rate 'LA Confidential' slightly higher.

Neo noir, post war, Denzel Washington... what's not to like? Interesting story, good acting... well made, all around.
3 people found this helpful

LaWandra CrummieReviewed in the United States on October 20, 2020
5.0 out of 5 stars
I got 2 for the price of one!
Verified purchase
I'm a Walter Mosley fan! I'm in the process of collecting all of his Easy Rawlins book series. I saw the movie first and was quite satisfied. But of course the book is more involved. Denzel made a great Easy Rawlins! It would have been nice to see him as the character again in another Easy Rawlins book to movie. But I guess this 1 will have to do. I'm a huge fan of Denzel!
4 people found this helpful

Manon de la CureReviewed in the United States on January 30, 2022
5.0 out of 5 stars
Devils Everywhere!
Verified purchase
Excellent film noir, and wish Denzel had played a P.I. in other films based on this character. Great acting by so many in this film and it is ageless. Wish Terrell had been brought to justice tho ...
One person found this helpful

Rawlins is a World War II veteran trying to get reestablished in LA following the war. He finds himself helping out someone hired to look for a white woman who is married to a prominent politician. Soon, he is caught up in the double dealings, mystery, and intrigue that only a 40's private eye can be involved in, and "Easy" begins to have it very, very hard.

He enlists the help of his Texas cousin "Mouse," played by Don Cheadle in what is one of the best scene-stealing performances in the past twenty years. "Mouse" hasn't met anyone besides "Easy" that he dosen't want to kill, and he works hard at being an efficient killer. The byplay with Washington's Easy is hysterical, and provides excellent comic relief.

This move is enjoyable on just about nearly every level. If you haven't seen it, you owe it to yourself to watch Devil in A Blue Dress very, very soon.
6 people found this helpful