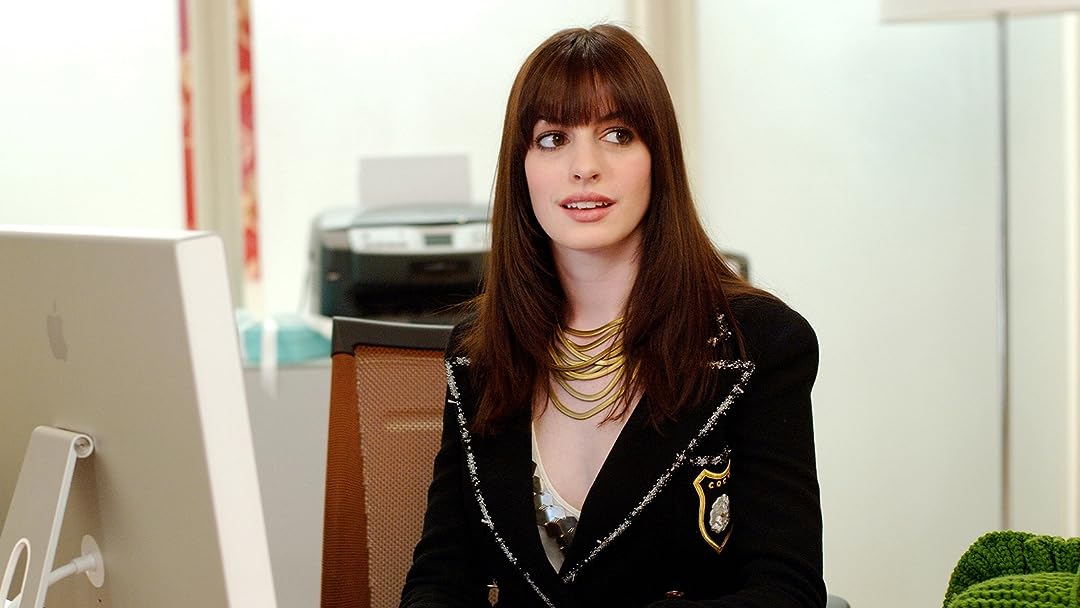 (27,277)
6.91 h 49 min2006X-RayPG-13
A smart but sensible new graduate lands a job as an assistant to Miranda Priestly, the demanding editor-in-chief of a high fashion magazine.

Saver125Reviewed in the United States on August 11, 2022
5.0 out of 5 stars
Behind the Scenes at Runway
Verified purchase
The Devil Wears Prada was an excellent movie with a top notch cast of actors and actresses including Meryl Streep, Anne Hathaway, Simon Baker, Steve Tucci and all the other actors as well for their brilliant performances. Andy, played by Anne Hathaway, takes a job at a fashion magazine called Runway for a boss played by Meryl Streep and she has limited knowledge about the inner workings of the fashion industry. She needed to learn quickly to survive. Meryl Streep, the boss, was very demanding since she strived for perfection at the Runway Magazine. Andy was called Emily in this production by the boss and learned that working for the Runway Magazine was almost a 24 seven job and she soon realized her social life and friends, family and boyfriend, were no longer priority over the work needed to fulfill this job. That wasn't taken well by people she cared about dearly. To fit into the scene, she needed a change of attitude and wardrobe to reflect the environment she was working in. If you want to know more about how this movie plays out and ends you may want to watch it. It doesn't disappoint.
4 people found this helpful

Lawrance BernaboReviewed in the United States on December 15, 2006
4.0 out of 5 stars
Anne Hathaway drinks the Kool-aid of haute couture but survives
Verified purchase
There are only three things wrong with the title of this review for the film "The Devil Wears Prada." First, Anne Hathaway is an actress who plays the character of Andy Sachs, but I keep thinking of her as Anne Hathaway as in "Now that Anne Hathaway has done sex scenes to get away from the whole Disney-Princess bit she is heading back in that direction in this film" instead of as her character. Second, it was grade Flavor-Aid and not Kool-Aid that was mixed with cyanide and Valium at the order of Jim Jones in Jonestown (and no one who drank it survived) but since the phrase "drink the Kool-aid" has become part of the vernacular once again historical facts have to take a back seat. Third, haute couture is used loosely to refer to all high-fashion custom-fitted clothing, but in France is now a protected name that can only be used by French fashion firms that meet well-defined standards. This time I will embrace the vernacular and my contradictory position on such things.

I used this flawed title for my review because for me it defines the pivotal moment in "The Devil Wears Prada" that establishes both the film's major strength and its ultimate flaw. Andy Sachs wants to be a journalist but ends up as the second assistant for Miranda Priestly (Meryl Streep), editor in chief of "Runway" magazine (think of something beyond "Vogue") because maybe a smart "fat" girl can work where so many skinny well-dressed girls have not. Andy is fresh from the Midwest and has a level head on her shoulder, so she knows, as do we the audience, that Miranda and everybody else at "Runway" are pretentious, elitist snobs. Nigel (Stanley Tucci) is nice, but everybody else follows the lead of Emily (Emily Blunt) and treats Andy as somebody from another planet where nobody dresses well because they buy off the rack. Taking notes during a meeting that has descended to the question of which belt would be the proper accessory, Andy snickers. Miranda casts a withering stare at Andy and then proceeds to explain why the sweater Andy is wearing is a direct result of a similar decision made by the people in that room a few years earlier.

That is the point where Andy does the Kool-aid drinking, and it was the point at which this film version of the novel by Lauren Weisberger starts to get away from being totally predictable. When screenwriter Aline Brosh McKennna ("Laws of Attraction") and director Peter Howitt ("Sliding Doors") take the fashion business more seriously, which is to say when Andy starts to take it more seriously, "The Devil Wears Prada" gains considerably more weight. Everytime we get back to Andy's boy friend Nate (Adrian Grenier), best friend Lily (Tracie Thoms), and fourth wheel Doug (Rich Sommer), things are a lot less interesting than when she is at the office. Her job is clearly demanding and her friends take issue with the fact that it might possibly be considered rewarding. However, I was interested in the idea that Andy would find her niche rather than lose her soul working for Miranda. Unfortunately, in the end we get back to the predictable path the film laid out in the beginning and the mantra that no job is more important than family and/or friends. The problem is I do not accept that premise, thinking of plenty of jobs (e.g., teaching) that require you to put the job first (I think of Leo McCary in Season 1 of "The West Wing" telling his wife that the job he is doing is more important than his family at that point of time; Leo's wife left him, but I have always believed he was right).

The net result is that despite another great performance from Streep, Tucci having some fun, and what should be a breakout role for Blunt, "The Devil Wears Prada" ends up being nothing more than what it promised to be from the beginning. I might have liked this 2006 film more without my favorite scene, because at that point I was thinking the film was more ambitious than it turned out to be. I know that the film is probably just being faithful to how the novel ends, but I definitely liked the movie I thought they were making more than the one they were actually making. At the very least I would have liked to see them walk the tightrope a bit longer, so that the idea Miranda's world was worth living in could be maintained in the last half of the film. But the whole "Hell on Heels" bit proves too seductive and if Streep sets up another Oscar nomination by refusing to let her character descend into caricature, the same cannot be said by Hathaway's Andy and this anti-princess cautionary tale.

ReugerReviewed in the United States on November 10, 2022
5.0 out of 5 stars
Great movie
Verified purchase
Great actors

RoseReviewed in the United States on October 11, 2022
5.0 out of 5 stars
Meryl Steep!!
Verified purchase
It’s a fun romp from start to finish. I’ve see it maybe 4 times.

Diane BReviewed in the United States on September 5, 2022
5.0 out of 5 stars
Awesome movie I've watched Devil Wears Prada many times
Verified purchase
the devil wears prada is an excellent movie. I've watched it so many times and it never gets old.
Such great acting. they were all perfect for their parts. In the 'about the scenes' notes on the sidebar, it told many people that could have been Andy that didn't get the part. So glad because it wouldn't have been the same without Ann Hatheway.
2 people found this helpful

Mary A RockeyReviewed in the United States on September 22, 2022
5.0 out of 5 stars
Love this movie! My fav.!
Verified purchase
Movie The Devil wears Prada is iconic! Love everyone in the movie! Funny, Has fashion, and a true picture of the stress level in that world!
One person found this helpful

NinaReviewed in the United States on September 4, 2022
5.0 out of 5 stars
Epic Movie for drama and fashion lovers!
Verified purchase
Great movie! The actors picked for the roles they played were perfect! You will laugh you will cry you will get attached to the characters in this movie!
One person found this helpful
See all reviews
Back to top
Get to Know Us
Make Money with Us
Amazon Payment Products
Let Us Help You
EnglishChoose a language for shopping. United StatesChoose a country/region for shopping.
© 1996-2022, Amazon.com, Inc. or its affiliates