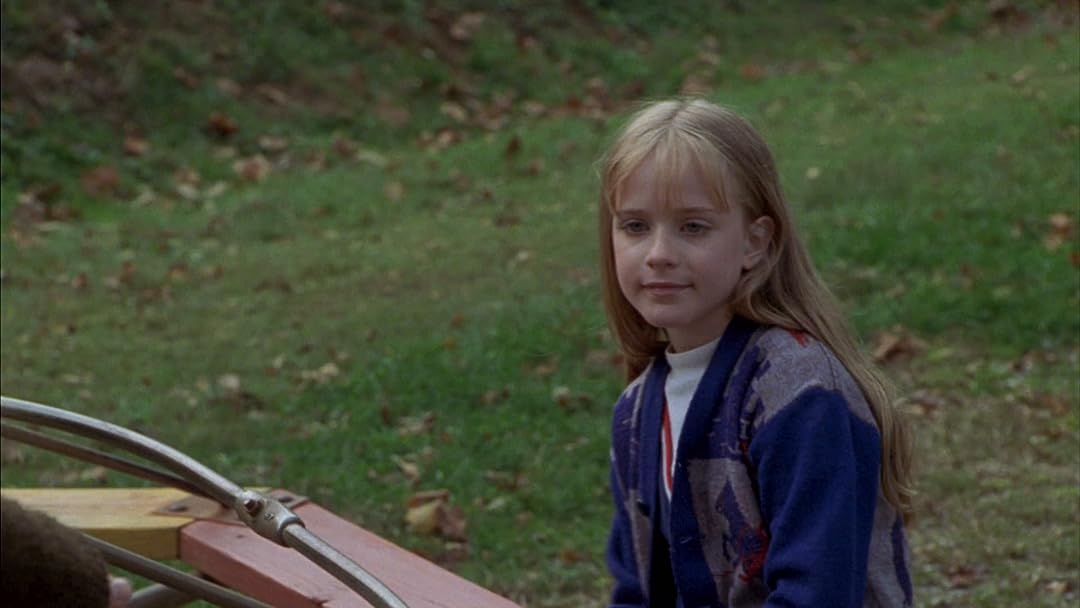 (269)
1 h 39 min1998PG
Kevin Bacon stars in this touching comedic look at the friendship between an adolescent girl and an intellectually disabled young man.

Carmen L.Reviewed in the United States on March 17, 2022
2.0 out of 5 stars
Good story about friendship. Since no one rescued little girl she likely ends up raped + pregnant
Verified purchase
I liked how it shows a neglectful abusive dysfunctional family and a really smart and compassionate 10 year old girl dealing with it and making a very good friend in the special needs man she found. Their friendship is really sweet. I also liked how it touched on how school bullying has affected her and how show and tell was good and that she had a semi decent teacher who means well and is not abusive but lets abuse and neglect and running away just go on without rescuing children from the domestic violence and threats from rapists and so on in their family. The person who made the mom pregnant is a pedophile because she had to conceive at 14 years of age which makes it statutory rape of a minor, which possibly means her grandma is a human trafficker that was forcing her older daughter into prostitution. It's considered child prostitution and a form of slavery if it happens any time between birth and age 17. If her mom wasn't forcing it and collecting money for herself, she was allowing men to rape her older daughter as a minor and men were trafficking her and not intervening which makes her a monster. I am glad she is dead. Good riddance. All human traffickers deserve to die ASAP.

However, seeing how things were going with her mom being a drunk smoker prostitute who beat her and surviving lots of things like nearly dying in car wrecks with her drunk grandma who she thought was her mom, I expect her to either end up dead in a car wreck herself as she thought she would, or forced into prostitution by her violent unhinged mother who she continuously runs away from. The reality is if no one comes to rescue her, she will be molested and may die. Not all the men who are with her mom are just going to be happy with one woman so they are going to go after this child and will rape her. The mom of the child is not going to care or intervene because it's what her mom did to her.

There were so many times when some one ought to have called Child Protective Services to rescue the child and they did not do that. So they left this girl in Hell. How is she supposed to survive? She is going to have severe PTSD from her childhood, from everything that has happened and will happen by being left in Hell.

The mother is unfit as a parent and a human being, and needs to be locked up in jail for child abuse. She smacked her daughter and knocked her to the floor. That is assault and deserves a long jail sentence. It doesn't matter that her daughter slapped her first. It's assault when an adult does head trauma to a child. The mother of the special needs man needs to come forward as a witness to the child abuse and assist the girl to get the mother in jail. If she doesn't come forward, she needs to be locked in jail for aiding and abetting a criminal child abuser. They can share the same cell and keep each other company for the next 5-10 years.

That is how I would write the ending with both mothers in jail. I would then have the man and the girl grow up together in an orphanage and the people at the orphanage will be kind people that are loving and do not chain them or electrocute them or feed them baby food, as they have in some homes for those with special needs (sanitariums they used to do that). It's better to just give them school work to do and ways to play outside together in nature, with each one having their own room. Maybe something like Plumfield Boarding School in Little Men. Maybe something Montessori based. Also I would have them learn about Jesus and come to know that God loves them. I don't think they know that anyone loves them, because the people around them are showing so much dysfunction and hate. They deserve to be surrounded by love.

I feel upset and angry on behalf of the little girl. I had to live her life only with more abuse and more death to deal with in addition to the abuse and death she had to deal with and not really too many special needs people for me to take care of. It was so hard on me. I'm still recovering and I'm nearly 40. No one rescued me either. I guess it's good I could take care of whoever I could in between all the torture and survival of death. But my life would have been better if someone would have come to rescue me, after all.

MoanakaiReviewed in the United States on September 1, 2021
3.0 out of 5 stars
I would not call this a comedy
Verified purchase
Kevin Bacon's acting was most notable in this drama. I guess I would call him mentally challenged but he doesn't really fit the role of those that I have worked with as mentally retarded, seemed to have some autistic tendencies at times or perhaps that was his acting skills. The story was important because the 10-year-old little girl had more compassion than many adults and could see only the good in Kevin, their friendship was heartwarming. I love the selection and use of music throughout pertinent to the time period. What I didn't like is they cut a lot of the scenes so you never saw the result of what happened, you knew what happened but it would have been nice to continue the scene-it was like an editing problem or the writer? for example, he's stuck on a rope on a bridge and she's on her way to get him and all of a sudden it's the next scene, therefore I'm not giving it the stars that I normally would. I also was not particularly happy with the ending as I felt it was rather abrupt although it appeared that the relationship with her mother would end up being harmonious after all. 3.5 stars.

GiftbearerReviewed in the United States on September 18, 2019
5.0 out of 5 stars
A Movie that breaks down many stereotypes
Verified purchase
The friendship between the girl and the man was beneficial to both of them in the circumstances they were faced with. Children have none of the misconception adults have and are more accepting of people with all sorts of disabilities. The other adults in this story seemed to assume the worst about Ricky when in fact he was none of the things they thought, and quite frankly he was not so severely affected that he needed to go away to a "home." That was the one flaw with the movie; that it was assumed he would never progress and would remain dependant the rest of his life. There were a number of moments when he showed quite a bit of insight. I know this movie was made awhile back but in today's world a man like Ricky would be living independantly and probably holding a job. Kevin Bacon did an excellent job with the role, even down to the way he held his body and face.
One person found this helpful

Leslie HReviewed in the United States on June 25, 2021
5.0 out of 5 stars
Loss, Suffering, Healing, Understanding!
Verified purchase
These are the components of life so beautifully portrayed in this film. This is a little like drawing still shots, binding them together, then using your thumb to bend a side of the pages making time move forward creating time itself. The time of mankind in which we learn to show mercy toward those in life who are formed through differences and suffering. Time to think and ask questions before we judge those less competent than those who have been handed everything on a silver platter, such as a perfect mind and body. May we always remember the second command of Christ, Love your neighbor as yourself! Funny, quirky and well acted!!!

SimlasaReviewed in the United States on May 12, 2020
3.0 out of 5 stars
I could have used more Moriarty and less Bacon.
Verified purchase
I watched this on a friend's recommendation.
It's NOT the sort of thing I'd ordinarily watch, primarily because of the 'Ricky' element. I do admire that the movie ventured into some difficult territory though, and carried it off pretty well.
I found Bacon's portrayal... bothersome. Sometimes seemed like a Jerry Lewis impersonation, other times it was fine... but the writing for the character also veered off at times, there was too much of that usual Hollywood thing where mentally-challenged people spout deep wisdom.
The rest of it was fine. I liked the family, the actresses, and the attention to period detail was great.
Ms. Moriarty was underused... I'd like to have seen more of her character.

TulliaReviewed in the United States on May 10, 2018
5.0 out of 5 stars
A Poignant Film
Verified purchase
This is a poignant tale about a ten-year old girl, Harriet, played by Evan Rachel Wood, and an intellectually challenged man, Ricky, played by Kevin Bacon, who become fast friends. Harriet's family runs a motel to which Ricky and his mother come to and stay for about a week. Ricky's mother is on her way to admitting Ricky to a home for special-needs adults. Harriet's family objects to her growing relationship with Ricky. Yet, the relationship is so meaningful it touches your heart. At one point, the two run away together.

I enthusiastically recommend this film.

Kindle CustomerReviewed in the United States on February 26, 2015
5.0 out of 5 stars
This is a winner
Verified purchase
Very moving! The wholesomeness of their relationship was totally lost on the sister/mother. I loved the portrayal of innocent purity in both of the lead actors. The simple joys of childhood and the difficult situations of their life: she having lost her dysfunctional but loving mother, and he with the desparate longing not to have to go to a home. It was so wonderful for both of them to have the time of closeness and the bond of acceptance before they both had to accept their life circumstances. One can image that the richness of their relationship strengthened them and never left them.
15 people found this helpful

Artsy FartsyReviewed in the United States on January 13, 2019
5.0 out of 5 stars
A Must See
Verified purchase
SO much about this movie is RIGHT ! I loved everything about it and all the loveliness of the friendship between Harriet and Ricky . It was very moving to say the least . I loved how genuine and heartfelt the friendship was . It reminds me that friendships can be as unique as people are and they can be found in the most uncanny places with people you would least expect . This movie had a lot of heart~ I LOVED it !
2 people found this helpful
See all reviews
Back to top
Get to Know Us
Make Money with Us
Amazon Payment Products
Let Us Help You
EnglishChoose a language for shopping. United StatesChoose a country/region for shopping.
© 1996-2022, Amazon.com, Inc. or its affiliates