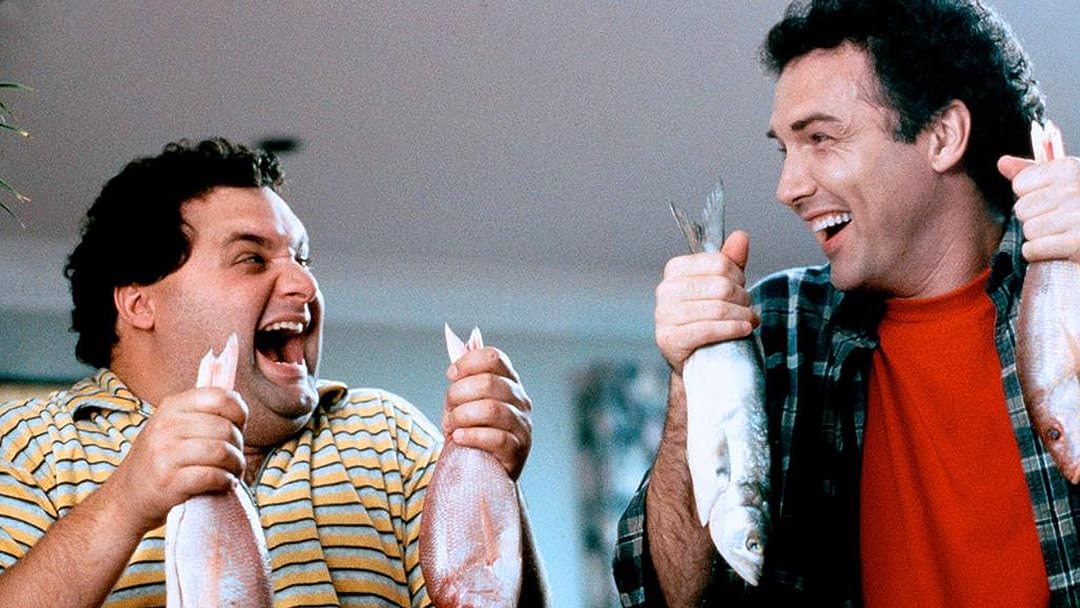 The Despot of Cartoons™Reviewed in the United States on July 10, 2021
5.0 out of 5 stars
A Hidden 90s Comedy Gem
Verified purchase
You can tell right off the bat that this is a 90s comedy, but that is not a bad thing! Norm MacDonald, Artie Lange, and Traylor Howard star in this tragically overlooked movie directed by Bob Saget about two guys trying to raise money for a sick man using the one talent they have: getting revenge.

I had bought this because it’s Norm MacDonald, and about 10 minutes in I realized I had seen it before! I doubt this film will ever be nominated for an AFI Top 100 list, but it is a good, entertaining movie with silly but not over-the-top comedy, no gory violence, a great pair of comedians who work well together, and a happy ending. At the end of the day, what more do you really need?

garyReviewed in the United States on October 11, 2021
1.0 out of 5 stars
Can I give it less than one star?
Verified purchase
What a complete waste of time and money.
Norm had a few good "one liners" but that doesn't make a "good movie".
Over an hour of complete unfunny. This movie could have been hysterical but wound up like old cardboard. I read that there was an "R" rated version that had all the "funny parts"... but they had to edit to make a "PG" version... difficult to believe that this was anything but unfunny. I like stupid movies, "dumb and dumber", "cable guy", any movie with Steve Martin... but this movie isnt even good enough to be used to pick up dog poo.

PhillipMReviewed in the United States on July 29, 2016
5.0 out of 5 stars
Dry, sarcastic & damn funny - Classic Norm MacDonald!
Verified purchase
The story follows a very familiar formula, akin to the late 90's SNL/Sandler flicks. Bumbling idiot(s), with no means, must save beloved character. Armed with only their wit/humor & some impractical skill that they can exploit. They'll cause some mischief, get the money to save them, beat the bad guy & get the girl. While along the way sprinkling in some great physical humor, some of Norm's wit & a touch of crass innuendo.

Dirty Work, doesn't really reinvent much but it does showcase a lot of great comedic humor. From stars Norm MacDonald & Artie Lang, to Chevy Chase & the late Chris Farley (his last official role - which he absolutely shines). Don Rickles & Jack Warden lend themselves well to this movie, giving a bit of respectability to the film. Dirty work isn't for everyone but if you are a fan of Norm (you've probably already seen this) or just a fan of dark moronic humor - you'll enjoy this.

It's crass and bawdy, but there's a lot of nuance to putting a bunch of hookers in the trunks of used cars and pretending to be dead, and the writers captured all of it. And of course they stage the finest adaptation of Don Giovanni ever, even using skunks to heighten the atmosphere of squalor and dispair.

Not to be missed are hilarious bit performances by Chris Farley and Chevy Chase.

LydiaReviewed in the United States on December 9, 2021
3.0 out of 5 stars
I love Norm but this hasn’t aged well
Verified purchase
We rented this because I’ve always loved Norm McDonald’s work in SNL and no one made me laugh as much as he did during late night shows like David Letterman. This movie just didn’t deliver what I was expecting- a lot of the jokes are cringy , crude and he just didn’t seem to be at the top of his game.It’s not like I never laughed once but it just wasn’t consistent. It was a disappointment and I wouldn’t recommend it personally.

DaveReviewed in the United States on September 30, 2021
5.0 out of 5 stars
Great overlooked comedy
Verified purchase
My friend introduced me to this movie years ago after he was saying one-liners from it and I had no idea where they were coming from, you know, back when you couldn't just Google the phrase. It's stupid good fun. Chris Farley and Chevy Chase both have hilarious but small roles in it. If you like Chris Farley or 90s Adam Sandler movies, you'll probably like this. RIP Norm.

Scrappy2Reviewed in the United States on October 8, 2016
5.0 out of 5 stars
Bob Saget
Verified purchase
Attention to detail. Jack Warden grabbing Norms' crotch. Artie's fat neck when Don Rickles lays into him, the opera critic, the wrong messages when Norm plays the tape recordings, jailhouse justice for Norm, Chris Farley and his skunks. Best line is Don Rickles during the credits. "How you got this movie I will never know".
5 people found this helpful

IT-Pro-MDReviewed in the United States on October 22, 2021
5.0 out of 5 stars
Comedy classic
Verified purchase
This is a small sometimes buried comedic gem of a movie, that I'd consider a cult classic for those who love it. Norm Macdonald was ridiculous and over the top comedy wise in this, and the scenes with Chris Farley are absolutely brilliant. RIP NORM!
See all reviews
Back to top
Get to Know Us
Make Money with Us
Amazon Payment Products
Let Us Help You
EnglishChoose a language for shopping. United StatesChoose a country/region for shopping.
© 1996-2022, Amazon.com, Inc. or its affiliates