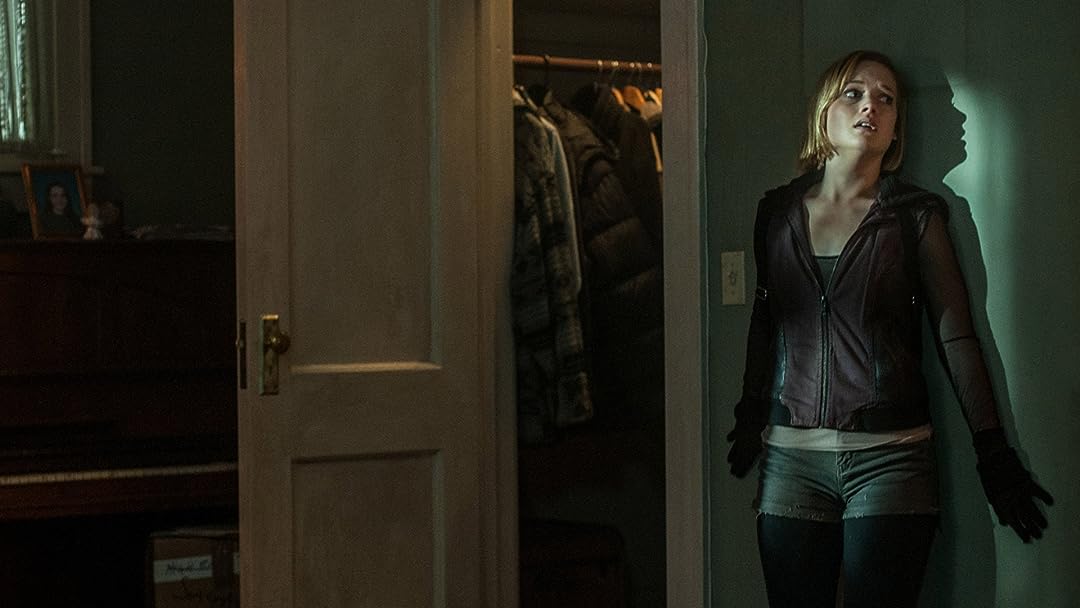 JackReviewed in the United States on September 13, 2019
1.0 out of 5 stars
Spoiler alert. Predictable, dissatisfying ending. Polical agenda to push.
Verified purchase
Again, this is the a spoiler alert that I will put up in case you hate predictable endings with an agenda to push.

So the characters are predictable: Harding working poor girl from troubled family, Beta nerd that adores her, and total jerk of a boyfriend. Both guys die, the jerk because he is not smart, and the nerd because he protects her. The girl gets to live after shoving "white liquid" down army veteran killer's throat (it is supposed to be symbolic). Girl gets to live and the film ends with a somber message that society is mourning the army veteran, not knowing of the people he killed. Do yourself a favor and skip this one.

D.RichmondReviewed in the United States on November 9, 2017
5.0 out of 5 stars
I was actually on the edge of my seat--for how long I don't recall, but deep into the film, I realized I'd sat up.
Verified purchase
One of the best films...ever...to date.

We're forced to care about the characters despite the fact that they are doing a bad thing. It's not right to root for burglars but 2 of the 3 have redeeming qualities, and while their choices and actions are questionable, you can't help but root for them to at least avoid the nightmare they've walked into.

The suspense is masterful in this. I know people will always cherish Alfred Hitchcock's films--and yes, they are great, and many hold up, but it's time to admit that a master can be out mastered, that those that studied him can apply not only his techniques, but others, and that is what has occurred here.

Regina Reviewed in the United States on September 24, 2021
1.0 out of 5 stars
WOW
Verified purchase
I wasn't expecting the turn of events in this movie. I don't know how this movie got the go-ahead but everyone in it was disgusting. The three young adults robbing people, the girl's mom, and stepdad, and the blind old guy. Saving your seamen to put it into a kidnapped teenager with a turkey baster is disgusting the is no way that person can have any redeeming qualities. Then the thief gets away with the money in the end because she wanted a better life for herself and her sister but she never tried getting a job to improve her life. She just went right to stealing from other people. I can't believe they're making a part two of this movie.
2 people found this helpful

SEALDoc911Reviewed in the United States on January 24, 2019
2.0 out of 5 stars
It's Entertaining but Absolutely Unbelievable
Verified purchase
The guy is blind, he's disabled....REALLY??? Because he seems to be able to grab and shoot people with perfect accuracy. I have worked with blind people and I can say without any doubt, this movie is not the least bit realistic. It is absolutely ridiculous. AND another thing, I am sooooo sick of seeing people taking beatings that would absolutely FATAL, but they're up and fighting at 100% again in the next scene...That kinda stuff is INSULTING!!!!!!!

Forgot the dog....Talk about useless, couldn't jump over a 4 foot fence that didn't even slow the girl down? Come on?
Then when it finally catches up to her? It grabs the bag she's carrying rather than any vulnerable part of her body. BUT the blind guy? He manages to catch up to her and punch her in the back of the head??? Seriously? He must be a NINJA!!!
5 people found this helpful

dcReviewed in the United States on October 30, 2018
2.0 out of 5 stars
So Many Plot Holes I Don't Know Where to Start!
Verified purchase
I couldn't even watch the entire movie - and my wife said "you NEVER stop watching even the bad ones!" The premise, and the trailer, seemed great: three people break in to rob a blind ex-military guy who turns out not to be such an easy mark. Now, okay, they decided to break in at night to add to the suspense of the movie by giving the blind guy an advantage, but that was already a stretch since we had already seen them break into a high-end home in broad daylight because they had the skills to override the alarm system. The home they broke into was in a bad part of town, sparsely populated, and they knew they guy would be home. So why not break in during daylight hours? They took the risk despite their expectation that he only had $300K in the house. I could go on about how good a shot the blind guy was with a gun, why three people couldn't overcome one guy, and why they couldn't manage to beat him to the front door, among other things. I understand we "suspend our disbelief" when we watch movies, and perhaps I would have been able to do so if this had been a supernatural horror film. Unfortunately there had to be too many coincidences for this plot to be the slightest bit plausible that I had to bag it, about halfway through the film. That's nearly an hour of my life I'll never get back.
4 people found this helpful

The Grouchy EditorReviewed in the United States on January 13, 2017
4.0 out of 5 stars
Pretty good for the first hour or so
Verified purchase
Some of the best nail-biters have simple plots. In "Burning Bright," a Bengal tiger terrorizes a young woman and her autistic brother in a house. That’s the plot. In "Black Water," a hungry crocodile terrorizes three tourists trapped in an Australian swamp. That’s the plot.

For about an hour, "Don’t Breathe" reminded me of those low-budget, efficient thrillers because it keeps things simple: Three small-time burglars are surprised when their chosen victim, a blind war vet, turns the tables on them after they break into his house. That’s the plot. The movie is taut and genuinely chilling. And then … well, that wasn’t good enough for writer/director Fede Alvarez, who decides to add a little "Cujo" here, a little "Silence of the Lambs" there. Should have left well enough alone. Grade: B – grouchyeditor.com
6 people found this helpful

walletboyniacReviewed in the United States on December 2, 2021
4.0 out of 5 stars
One of the better home invasion thrillers
Verified purchase
... In an extremely long line of them. Hey, Mia from Evil Dead is back! (Don't Breathe is from the makers of the Evil Dead reboot, literally the only reboot I've seen that does the original justice). So, this is stylishly made, has that great eerie Detroit setting, is well-acted, intense, interesting score, and has some good action. It's also got a whole bunch of implausibilities. I don't want to give away how things unfold, but there are plenty of instances of "How is this person still alive?," as well as complete lapses of logic. I thought the worst offender came at the end: The Blind Man knows the code to all his safes, but not the one to his home security system?! And he was RIGHT THERE. I found this baffling, and very convenient to how things play out. In other words, lazy modern horror writing. One quote on the box says "Best American horror film in twenty years!" Has this guy been living in a cave? It's a ludicrous statement. Also, very telling -- Best "American" -- yeah, critics fawn all over the foreign stuff.

Anyway, don't get me wrong, this is a strong home invasion entry, just not without its share of nagging plot holes. It was good enough that I'm watching Part 2 tonight, to see what the Blind Man is up to nowadays.

Kaden MortonReviewed in the United States on August 7, 2020
2.0 out of 5 stars
I’m 14 and this is deep
Verified purchase
I wanted to like it, but I didn’t. Unfortunately, although it was meant to be suspenseful, it felt predictable at times, and when it wasn’t predictable, I couldn’t really follow what was happening or why it was happening... First I’d like to say that Alex(?) and Rocky(?) and the blind guy should’ve all been very dead several times over, or at least incredibly weak and concussed. And didn’t Alex get shot in the lung/chest cavity? He’d have a collapsed lung. No way in hell would he be running or swinging a hammer. So that was inconsistent. Second of all, I get that you’re supposed to not be sure who the bad guy was... but man. They’re all just bad guys. There’s no good guys. All of em are good for nothing. That wasn’t hard for me. So that was annoying. The whole “just cause he’s a veteran doesn’t mean he’s a hero” shit just didn’t justify the kids being “good”. They’re not just robbing from a blind guy/war veteran- which kept being brought up, they were stealing the settlement money that he got from his pancake flattened daughter... He has nothing left. They’re robbing his daughters manslaughter settlement. The delinquent kids were annoying and vain at best. I didn’t feel sympathy for any character. I was often bored. Again. I wanted to like this movie. I can see the appeal for people who just like a simple scary movie. It was just too simple for me...
3 people found this helpful
See all reviews
Back to top
Get to Know Us
Make Money with Us
Amazon Payment Products
Let Us Help You
EnglishChoose a language for shopping. United StatesChoose a country/region for shopping.
© 1996-2022, Amazon.com, Inc. or its affiliates