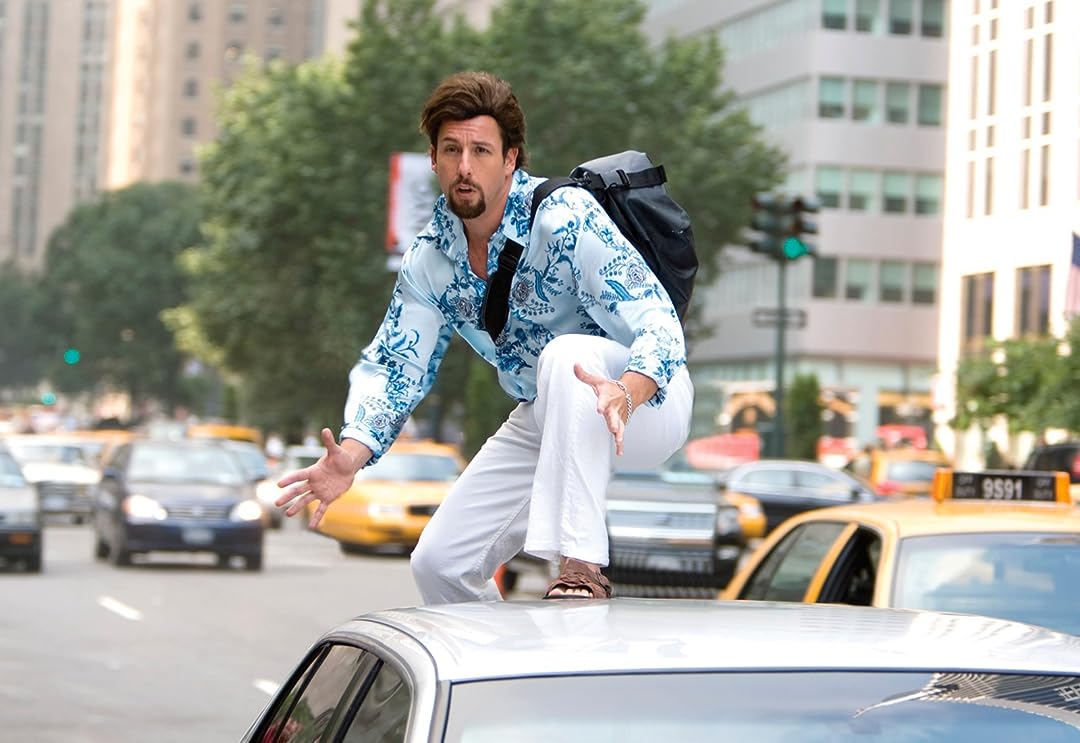 You Don't Mess With The Zohan

(3,016)
5.51 h 52 min2008X-RayPG-13
Comedy superstar Adam Sandler is back - and funnier than ever - as The Zohan, the finest counterterrorist agent the Israeli army has. That is, until he fakes his death and travels to Manhattan to live his dream...as a hairdresser. Now this skilled fighting machine who used to clip bad guys is out to prove he can make the cut as a top stylist. All goes silky smooth until his cover is blown when ..

FoesFlyReviewed in the United States on February 20, 2018
4.0 out of 5 stars
he's funny but not hysterical
Verified purchase
I'm not a huge fan of Adam Sandler movies. For my sense of humor and sensibilities, he's funny but not hysterical. This movie however made me laugh so hard, my stomach was killing me! That is the case in several different scenes too. There are times when a scene drags a bit with little to laugh about but the scenes that do work, work VERY well. I've watched it 4 times since it was first released for rent on DVD and am sure I'll dig it out of the closet at least twice more over the next few years.
9 people found this helpful

Rick DReviewed in the United States on July 3, 2020
3.0 out of 5 stars
Too crude for family movie nite
Verified purchase
I rented this movie for family movie night after reading all the positive reviews about it. Although it was very funny (in a silly way) the sexual crudeness throughout the movie made this uncomfortable to watch with my early teen. Be forewarned that there are lots of bare butts and bulges throughout. The 3rd star is given because we did share a few laughs.
One person found this helpful

fenx1200Reviewed in the United States on January 15, 2018
4.0 out of 5 stars
Give it a shot!
Verified purchase
This movie is like a Mark Twain short story - just watch it and enjoy it. Of course it's silly, but there are some great cameos and it has a parable, just like the many found in the Bible - brotherhood for the Israelis and Palestinians in America. That's all one can say about Adam Sandler movies.
Rob Schneider was great as usual. Grab some popcorn, and watch one possible solution to the Israelis and Palestinian conflict.
6 people found this helpful

Amazon CustomerReviewed in the United States on July 11, 2020
5.0 out of 5 stars
Stupid, tacky, offensive and GOOD
Verified purchase
This is a dumb movie. Really dumb. It is supposed to be. It will offend more than a few I expect. They pretty much make fun of everyone in this farce. If you are offended by this silliness, you are probably the kind of person who looks to find offence wherever you can. Loose the stiff neck, starched shirt and self righteous attitude and laugh along with the rest of us.
One person found this helpful

RashidnewReviewed in the United States on July 3, 2020
1.0 out of 5 stars
insulting as well as a cheap movie!
Verified purchase
I believe this director deserves a medal. I don't think anybody has achieved to insult both the Israelis and Palestinians in one movie! I don't even want to start commenting on the cheap story and acts.
One person found this helpful

errin spellingReviewed in the United States on March 16, 2020
4.0 out of 5 stars
funny and a superhero
Verified purchase
it would be funny just on it's own. you don't need the superhero that catches bullets ,in his teeth or fish with something else. a mossad agent ,who wants to be a hairdresser would be a great story, and more believable. teenagers will love this movie. larry david's father on curb your enthusiasm is adam sandler's father ,in the film.

BAT-505Reviewed in the United States on October 12, 2020
1.0 out of 5 stars
Very stupid movie not worth your money
Verified purchase
This is truly the worst movie I have ever purchased in my life truly not worth $0.01.. a total waste of money.. I couldn't even sit through the rest of this movie it is just awful... and I am going to take a loss on this movie because they send you through so many changes to return this movie it's not worth the trouble..👎👎👎👎👎👎👎👎👎👎

green manalishiReviewed in the United States on November 15, 2010
4.0 out of 5 stars
Original, not bad, but not his best either
Verified purchase
I gave it 4 stars 'cause it's on the better side of 3. I thought it started out funnier than it ended - granted by the ending there was more of a 'message' angle to things, but I thought the quality of acting and the pace just seemed to lose it more towards the end. Could have been all the guest stars (Chris Rock as a Haitian/Jamaican cabbie? Winkler as.. who? etc). And while Sandler kept up his end mostly throughout, some of the supporting characters seemed too 'American' to be spoofing the Middle East - though some did the job well enough. The girl salon boss that he loves - she occasionally seems to forget her 'Palestinian' accent.. But whatever - it's not like you were taking this movie TOO seriously anyway, though I do think it could have been better had they played it a little tighter in some places. There are some good gags, though the gimmick starts to wear off a little toward the end as 'the message' kicks in. It's a fair enough message though I'll say that.

I wanted to see this movie and now I have. It's on the better side of Sandler films, most of which I've seen. I don't think it's better than some of the classics, for example "Bulletproof", "The Waterboy", "The Wedding Singer" or in his deeper fare, the excellent "Punch Drunk Love". I even liked "Funny People" more. But it is an interesting and original character in the Sandler catalogue all things considered. No, I don't think it's comparable to Borat, as someone mentioned - another great movie btw - though speaking of Sacha Baron Kohen, this movie Zohan may be of more resemblance to Kohen's "Bruno" which was TRULY hilarious - I ached from laughing so hard when I saw that. That movie however makes the crude humor in "Zohan" look tame (you've been warned!). All things considered, I'm not sure Zohan is really 4 star material, but if not then it's a very high 3. No need to tell Sandler fans it's worth a look. Zohan is an entertaining and decent movie altogether, but fell a bit short of its potential I thought.. to sum up in 3 words: it was ok.

One person found this helpful
See all reviews
Back to top
Get to Know Us
Make Money with Us
Amazon Payment Products
Let Us Help You
EnglishChoose a language for shopping. United StatesChoose a country/region for shopping.
© 1996-2021, Amazon.com, Inc. or its affiliates