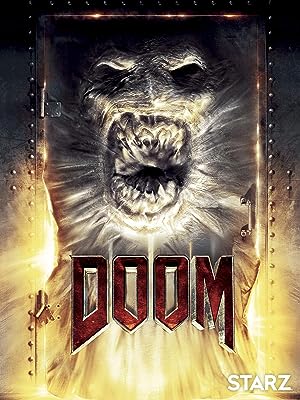 (222)
1 h 44 min2005R
A group of space marines are sent to investigate strange events at a remote research facility on Mars, but once they arrive, they find themselves at the mercy of genetically altered killing machines.

Mr. FloaterReviewed in the United States on July 26, 2020
1.0 out of 5 stars
One of the worst movies I've ever seen
Verified purchase
Full disclosure: Video games are a waste of time to me, so I came into this movie knowing nothing about Doom. Wrestling is fake to me, so I don't know anything about this guy "the rock", but I have to say his nickname makes me unable to take him seriously.

I only ended up watching this because it's so highly rated on Prime Video. I can't figure out why anyone would give it more than 1 star.

The only thing good about this movie is Rosamund Pike. She's beautiful, and played her part well. The rest of the acting is bad. The story had promise, but was under-developed. The cinematography is some of the worst I've ever seen. Most scenes are too dark to know what's happening. The special effects are impossible to take seriously. And the dialog is terrible.

Overall the movie is a waste of time.

Informed ConsumerReviewed in the United States on May 21, 2015
5.0 out of 5 stars
Great movie, quality format, cool case
Verified purchase
I'm starting up a nice little collection of these comic style steelbooks and my only complaint is the extremely limited library.

First, this is a Universal exclusive. Other companies make steelbooks, but the comic book cover style is exclusively Universal.
Second, Universal didn't release that many of their movies in this format. So your options are limited. Personally, I think this style is perfect for comic book movies (go figure) but also cult classics like Hot Fuzz or Blues Brothers. I think there's even a Big Lebowski one.

Other than that, the movie itself is great. I saw this when it first came out and, while it wasn't exactly what I was expecting, it was still fun. You have to know what you're getting going into it though.

For starters, the whole movie isn't First Person like the game or many of the trailers, that's about a 3-4 minute scene. Second, it's not an epic blockbuster. It's just a fun, sci-fi shoot-em-up. And honestly, that's ok with me.

It's a lot better than most of the Rock's movies largely due to the fact that Karl Urban consumes much of the spotlight in this movie.

Bottom line, if you're in the mood for a lazy afternoon watching space marines shooting aliens then this is your movie.
3 people found this helpful

C. Mac Kiss Reviewed in the United States on January 2, 2021
5.0 out of 5 stars
Great DOOM Addition
Verified purchase
Forget the haters, this is a guilty pleasure film for me, I even got the chance to tell Carl Urban how much I enjoyed it (super nice dude).. This still book looks great on a shelf and is a must own for Doom Fans.. The game is nothing but running a shooting SciFi demons , and the movie is just as fun ..

“I don’t need anybody, But Soldiers!”

Samantha O'ConnorReviewed in the United States on April 2, 2015
5.0 out of 5 stars
the movie was nothing like that. At all
Verified purchase
As someone who grew up with the games (both PC and console), the movie was nothing like that. At all. But it was still a fun ride. I really did enjoy watching, though I do wish they'd delved more into why it was Reaper was to stay behind initially. Yes, I read the book. I know why. But to people watching the movie, they really have no clue.

Another cult classic. It's cheesy, it's uber violent, it's awesome. This is a perfect Saturday night movie because it's not gonna ruin the rest of your day. Love it. You know you want to
One person found this helpful

V. BenderReviewed in the United States on June 13, 2011
3.0 out of 5 stars
NOT in the same case-- one copy of each
Verified purchase
I expected this set to be a typical blu-ray combo set (1 case, with 2 discs inside). That was a copy of the Doom DVD in its original case and another copy of the Doom blu-ray in its own case. If I had known this, I would have just purchased the Blu-ray and DVD separately, as they cost less than this "combo pack". Had to buy a separate 2-disc case on eBay so that this wouldn't waste space on my movie shelf. Bottom line-- If you want a combo pack, buy these separately because they're cheaper and the same thing you'll get if you purchase this.

nathan rollinsReviewed in the United States on March 14, 2020
1.0 out of 5 stars
was not scary and boring
Verified purchase
waste of time

RedOneStandingByReviewed in the United States on August 27, 2015
4.0 out of 5 stars
Four Stars
Verified purchase
The movie needed more first person POV. At least we got a Doom movie starring "The Rock".

MachsevenReviewed in the United States on December 30, 2014
5.0 out of 5 stars
Semper Fi
Verified purchase
Hey as an x Navy FMF 4804 corpsman this is a Semper Fi. The Rock Rocks in this!
2 people found this helpful
See all reviews
Back to top
Get to Know Us
Make Money with Us
Amazon Payment Products
Let Us Help You
EnglishChoose a language for shopping. United StatesChoose a country/region for shopping.
© 1996-2021, Amazon.com, Inc. or its affiliates